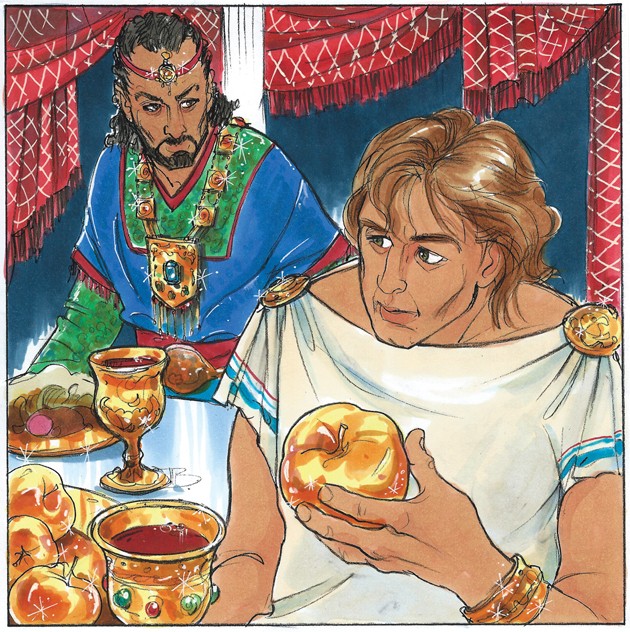 Once upon a time, there lived a king known as Alexander. He was a bold, brave king who loved treasures. For many years he led his armies through the world, conquering people and plundering the land.

As the years passed, Alexander became richer and more powerful, but he was not happy. He longed to find the secret of happiness, and so he continued to search.

One day, he reached a land where all the men and women seemed at peace. Alexander was amazed. The people lived simply. They owned no riches or treasures. And still, they seemed happy. They did not quarrel. They did not frown. They did not shout or argue or weep. Alexander had to discover their secret.

He visited their ruler.

The ruler greeted him warmly. “We welcome all strangers to our land. Please, dine with us this evening.”

When they were seated in the simple dining room, Alexander reached for an apple sitting on a platter of nuts and cakes and fruit. When he touched it, he realized it was made of gold. He turned with astonishment to his host.

His host laughed. “Of course not, we eat very simply. But we have heard how much you love gold, and we seek to please you.”

Alexander smiled. “You don’t understand. I am not seeking your gold. I am seeking your secret — the secret of happiness.”

“Ah,” said the host. “Then you must watch and listen. Come tomorrow to our court. It is there that you will most easily learn the ways of our people.”

Alexander and his host shared a simple meal, and that night Alexander fell asleep feeling better than he had in many years.

The next morning, Alexander arrived in court just in time to see two men enter the courtroom and stand before the judge.

The first man was invited to speak. “I bought land from my neighbor here,” he said, pointing to the man beside him. “I paid him a fair price. Yesterday, as I was digging on my land, I discovered a box full of jewels.”

Alexander leaned forward, waiting to hear the neighbor argue that the treasure must be his. Instead, the man went on. “But this treasure does not belong to me. I bought only the land, and when I took it to my neighbor, he refused to take it. You must order him to take what is rightfully his.”

The judge called upon the neighbor to tell his side.

“I sold him the land, but I did not reserve the right to anything he might find there. This treasure does not belong to me. I refuse to take it.”

The judge turned to the first man and asked, “Do you have a son?”

The judge turned to the neighbor. “Do you have a daughter, sir?”

The judge thought quietly a while. Alexander watched in wonder. After a few minutes, the judge said, “Your son and your daughter will marry, and the treasure will be their wedding gift. That is my judgment.”

The neighbors nodded and agreed that this was fair. And besides, they said, their son and daughter loved each other.

Alexander could not believe his ears. When court adjourned, he hurried to speak to the ruler. “In my country, such a judgment would never have been possible.”

“And what would you do in your country?” the ruler asked.

“We would throw these men in prison for taking up the court’s precious time,” Alexander replied.

“And what of the treasure?” the ruler asked.

“It would have been rightfully mine,” Alexander said. “All treasure belongs to the king.”

The ruler listened thoughtfully. Finally he asked, “You call this justice?”

“We call it the law,” Alexander answered.

Again the ruler thought a few moments in silence and at last asked Alexander, “Does the sun shine over your land?”

“Of course,” Alexander said. What a strange question, he thought.

“Does it rain over your land?” the ruler asked.

“Yes, just as it rains everywhere,” Alexander said. “Why ask such a thing?”

“One more question,” the ruler said. “Are there any harmless animals wandering your land?”

“Of course,” Alexander answered, thinking of the quiet camels, the docile sheep, the rabbits, hares, hedgehogs and mice, the dogs and cats.

“Then the sun must shine and the rain must fall in your land for the sake of your beasts,” said the ruler. “The men of your land are unjust. If they can be so cruel to each other, they do not deserve the warmth of the sun or the nurturing rain. Such blessings do not belong to those who are cruel.”