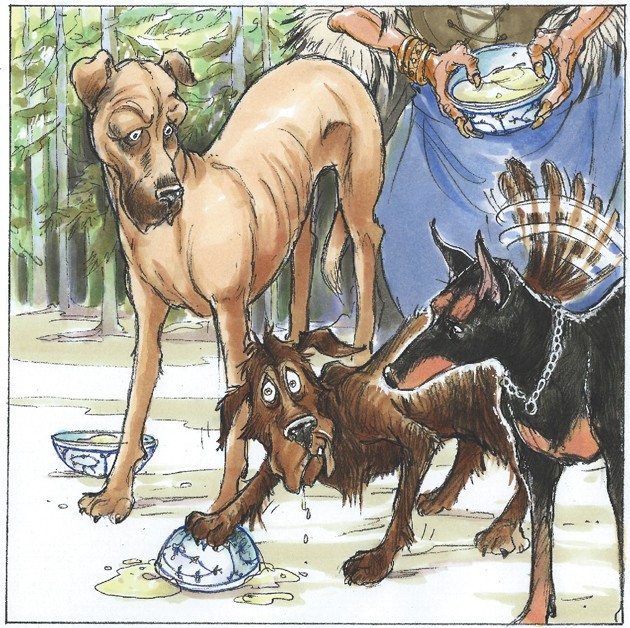 Once upon a time, there lived a lad named Oliver who was as lazy as the day was long. His poor father, a peasant, could not convince Oliver to work.

One day, Oliver’s peasant father was praying. “Please tell me what to do with my son,” he begged the Lord.

A janitor happened to overhear him and whispered, “Teach him magic.”

The peasant believed the voice must be the Lord’s.

The next day, the peasant began to search for a magician to teach his son.

At last Oliver’s father found an old troll who was known for his magic. The troll lived deep in the forest, and there the peasant took Oliver.

“I’ll teach him,” the troll said, “but he must stay for four years. At the end of four years, if you find him, he is yours. If you cannot, he will remain mine.”

The peasant agreed and hurried home. He was certain Oliver would be home by the end of the week. But a week passed, and then another and another, with no sign of Oliver.

Four years passed, and on the last day, the peasant set out for the troll’s house. On his way he passed a shepherd who said, “Listen carefully. When you reach the troll’s house, you will see three dogs in the yard eating porridge. The middle one is your son. When the troll asks you to identify your son, choose him.”

When the peasant reached the house, he saw three dogs. Two were strong and handsome, but the third was weak and trembling and wagging his tail.

“Which one is Oliver?” the troll asked. “Choose correctly and he may return home with you. Choose wrongly, and he belongs to me forever.”

“I choose the scrawny one in the middle,” the peasant said.

“Wise choice,” said the troll. He strapped a leash to the dog’s collar and handed one end to the peasant. “Go home now.”

The peasant was horrified. “I cannot go home with my son as a dog. His mother will be heartbroken. Change him back!”

“If he has paid attention, he can change himself,” the troll said, and so the peasant sadly departed, leading the dog behind him.

When the peasant passed by the shepherd, he asked, “Why are you crying?”

To the peasant’s amazement, the dog spoke: “Watch how well I have learned my trade. I will turn into a tiny dog and you will sell me.”

With that, he turned into a fluffy white dog. Soon a carriage carrying a wealthy merchant and his wife rode past, and when the wife saw the dog, she said, “I want that dog! I’ll pay you whatever you wish!”

The peasant agreed, the money changed hands, and the merchant took the dog. Just then Oliver turned his father into a hare. The hare raced across the road. The dog leaped from the carriage to chase after it. Father and son, hare and dog, disappeared into the woods.

When they were safely hidden, Oliver turned himself back into a lad and he turned the hare back into his father.

The peasant was overjoyed, and they hurried home to celebrate their newfound wealth.

But a month or two passed and they had spent all their money. “I shall turn into a boar,” Oliver said. “Take me to market and sell me, but when the purchase has been made, throw a rope over my right ear and go back home.”

The peasant did as Oliver instructed him. There was just one problem: The peasant set the price so high, no one offered to buy the boar until an old man came along at the end of the day.

This was the troll in disguise. When the deal was complete, the peasant threw a cord over the boar’s right ear. The boar vanished, the peasant walked home, and he found Oliver sitting at the table.

Once again they celebrated their success.

Time passed and they spent all their money, so Oliver turned himself into a horse. Off to market father and son went, but this time the troll was on to their tricks. Before he agreed to pay for the horse, he said, “I must lock your horse into a stable.”

The peasant could not throw the rope over the horse’s right ear, but he hurried home, hoping Oliver would be there anyway.

Meanwhile, the troll rode the horse far into the forest and there he threw a magic bridle over his back and locked him in the stable.

In the morning a servant girl found the poor horse moaning. “I need water,” the horse begged. She gave him water. “Take off my bridle,” he said. And she did. Oliver turned himself into a hare, and when the girl opened the door, he hopped away.

They raced past a palace where a princess was sitting in a window. When she saw the poor dove in danger, she opened her window and let him inside. Then she closed it against the hawk.

To get inside, the troll simply turned himself into a prince and walked to the palace door. He knocked and was let in by the guards.

The princess introduced herself and let him walk around the palace. The prince searched for the dove but found none.

“Let me see your rings,” he said to the princess.

The dove, sure enough, had turned into a ring.

The princess showed the prince her rings, dropping one into the fire.

“Aha!” the prince said. “That’s him,” and he reached for the ring, but as he did, the ring turned into a kernel of corn.

The troll turned himself into a hen, ready to eat that corn, but as he did, the corn kernel turned into a hawk and killed the hen.

Then the hawk turned back into Oliver.

Oliver bent down on his knee and asked the princess to marry him, and she said yes.

Oliver then returned to the troll’s home and carried away all his gold and silver. He gave it all to his father for helping him to learn such a fine trade.