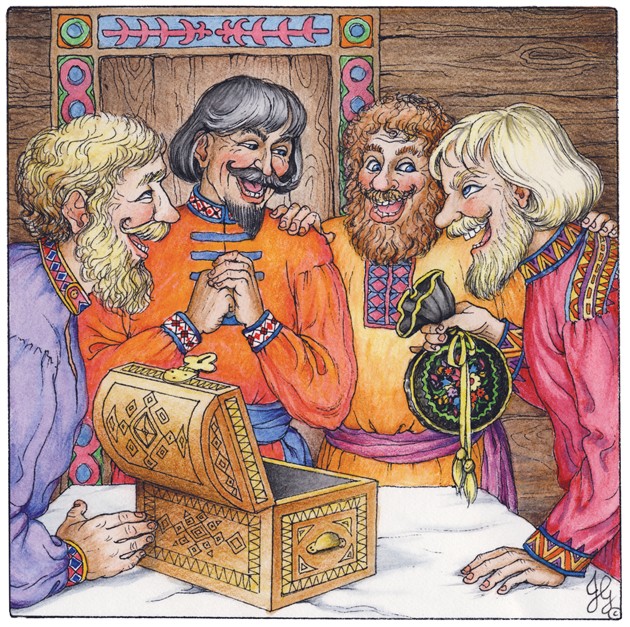 Once upon a time an old man lived with his four sons. His wife died when the boys were young, and so he raised them on his own. He worked hard, and the boys grew up and married and each one moved into his own house.

When the old man grew too old to care for himself, he asked his eldest son, Luka, to take him in. Luka worried that his father might be too much trouble. “Perhaps my brother Danya is a better choice,” he said. “His house is larger.”

So the old man moved into his second son’s house, but within weeks Danya began to fret. His father was eating too much of his wife’s good food. He suggested that the old man live with Aleksander.

Within days Aleksander also began to despair. The cost of taking care of his father was too much, so he sent him to live with Maksym, the youngest son.

Alas, before long Maksym decided his house was too small.

A few days later all four brothers called their father to tell him of their decision to send him to school. “In school you will have your own bench to sit on and a bed to sleep in and food to eat. And you will learn!”

The old man was stunned. “I’m too old,” he said. “My eyes are too weak to read. Besides, I would like simply to end my days in quiet and comfort among those I love.”

But no matter what their father said, the young men were determined. They packed a knapsack for him, gave him a sturdy horse and sent him toward the city.

As the old man was riding through the forest, a rich merchant in his carriage happened past. The merchant leaned out and greeted him. “Where are you off to?” he asked.

“To school,” the old man replied.

The merchant was startled. “Wait, old man. Shouldn’t you be enjoying your last days in comfort at home?”

The old man began to weep, and he told the merchant the tale. The merchant’s heart swelled with sadness. “That’s a terrible story,” he said. “School is no place for you. I have a plan that will help you.”

With that he poured something into a silk purse embroidered so beautifully, only a wealthy man would own such a thing. “I will tell what you must do,” he said, and he explained his plan to the old man.

When his sons saw their father cradling a heavy box, they were curious. A box meant a gift, surely. They rushed to meet him and asked, “What treasure is in the box, Father?”

“But before you tell us what it is, you must eat,” Danya said as Luka and Maksym showed their father to the table.

After the old man ate his fill, he said, “A long time ago I made much money, but I was determined to save it. So I buried it in the forest, and I forgot about it. But when you sent me to school, I passed by the very oak tree beneath which I buried the treasure. That’s when I remembered. I dug it up and brought it home. I shall keep it until I die. Whoever is most kind to me will receive the box after I die. ”

“But my wife is the best cook,” Danya said. Aleksander argued that his children were the kindest. Maksym begged his father to stay with him. “I love you best,” he pleaded.

For the next months the old man lived in splendor. His sons fed him well. They tended to his clothing and to his every need. Both they and their wives were kind and generous.

He died a happy man.

As soon as he died, his sons began to argue. They argued about who had been kindest, who had been most generous, who most deserved the treasure. At long last they decided they must ask the village elders to decide who would have the box.

The elders agreed that each of the young men had been kind to the old man in his last days. “You shall share the treasure equally,” they said.

The brothers gave their father a fine funeral. They treated the villagers to a banquet and offered alms to the poor, and for 40 days they prayed for their father. Each one outdid the other in his efforts to be kind and generous.

After 40 days they gathered together and opened the box. Inside they found the beautiful purse. When they shook it, they heard the glorious tinkling of coins.

“I shall do the honors,” Luka said, and he untied the purse and emptied the contents on a table.

The four young men stared. There was nothing there but shards of glass.

But the village elders only smiled. “This is what happens when you send your old father to school,” they said. “In his old age he learned a vital lesson.”