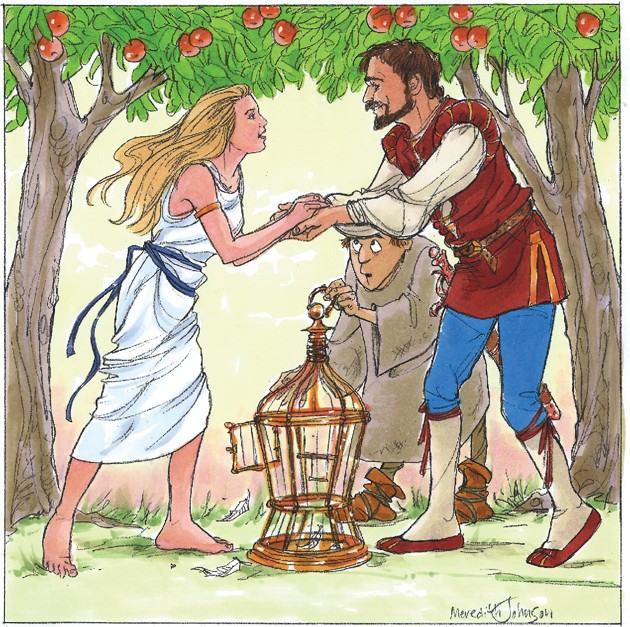 Once upon a time, a king had one son, and when he was old enough, he told his father he wished to marry the most beautiful woman in the world.

“I’m going to travel the world until I find her,” said the prince. And he set off.

He traveled far that first day and came to a stream, where he stopped to drink. As he leaned over, he saw three oranges reflected in the water. He turned around and saw an orange tree. The fruit looked so tasty that the prince could not resist. So he climbed the tree and plucked three oranges.

When he cut open the first orange, a beautiful maiden stepped out from the inside. She said, “Give me bread,” but the prince shook his head and said, “I have no bread.” Before he could stop her, she stepped back inside and the orange became whole again.

Amazed, the prince cut open the second orange. This time a maiden even more beautiful than the first stepped out and said, “Give me bread.”

“I can’t,” the prince said, “I have none.” Once again, before he could say another word, she stepped inside and the orange became whole.

Now the prince decided he must find some bread, and as he was contemplating what to do, a gypsy happened to pass by in a cart.

“Hello, my friend,” the prince called. “I will give you a sack of gold for a piece of bread.”

Naturally, the gypsy gave the prince some bread, and they made their exchange. The prince quickly sliced open the third orange, and out stepped another beautiful maiden.

“Please give me bread,” she said, and the prince handed her the bread.

The maiden ate it and smiled at the prince, who had fallen for her.

“Marry me,” he said, and the maiden agreed.

The prince saw the maiden was wearing tattered clothing, and he could not take her to the palace as she was. He turned to the gypsy and said, “Let me borrow your cart to go get clothing for my beloved.”

The gypsy said, “OK, but I must wake my daughter,” and he reached down and shook the girl awake.

His daughter sat up, took one look at the prince and fell instantly in love. When the prince set off with the cart, the gypsy told his daughter the story. As he did, she concocted a plan to win over the prince.

She turned to the maiden and said, “Let me comb your hair. I will make you even more beautiful than you already are.”

The maiden agreed, and the girl began to brush her hair. As she did, she pierced the maiden’s head with a pin and she instantly turned into a dove and flew away.

The girl removed her own clothes and dressed in the maiden’s tatters, and she sat in the spot where the maiden had been. When the prince returned from getting new clothes, he squinted at her. “You look different,” he said. “What has changed?”

“The sun has burned me,” she said.

“But your eyes were full of light,” he said.

“When you departed, the light faded from my eyes,” she replied.

“And your voice, it sounds so different,” he said suspiciously.

“It is the voice of a woman longing to marry you,” said the girl. “When we marry, I will look and sound like the woman with whom you fell in love.”

The prince believed her, and so they returned to the palace and married the very next day.

That night a dove appeared in the garden. “How is the prince?” she asked. “Does he love his wife?”

The gardener shrugged. “It does not seem so to me,” he said.

The dove flew away, but the next day she returned and asked, “How is the prince? Does he love his wife?”

“He seems sad,” the gardener said. “I don’t believe he loves the princess.”

After that, the dove came every day to the garden. Each day she asked the same question. With each passing day, the gardener’s answers became more certain.

“He is as unhappy as any man I know,” the gardener said.

The next day, when the dove appeared, the gardener caught her and put her in a golden cage and he carried the cage to the prince.

The moment the prince saw the dove, he felt his heart expand with love. He opened the cage door, reached in and lifted her out. Then he held her and she began to sing.

“What a beautiful creature you are,” said the prince. Moved by affection, he began to stroke the dove’s head, and as he did, he felt a pin. “What is this?” he asked aloud and he pulled it out.

The dove instantly turned back into the maiden. Then she told the prince all that had happened.

The prince immediately ordered his false bride to be expelled from the palace. His father, the king, decreed the marriage had never been real, and so the prince and the maiden married and lived happily ever after.

And as for the gypsy girl, they say she learned her lesson that deception will never bring true happiness.