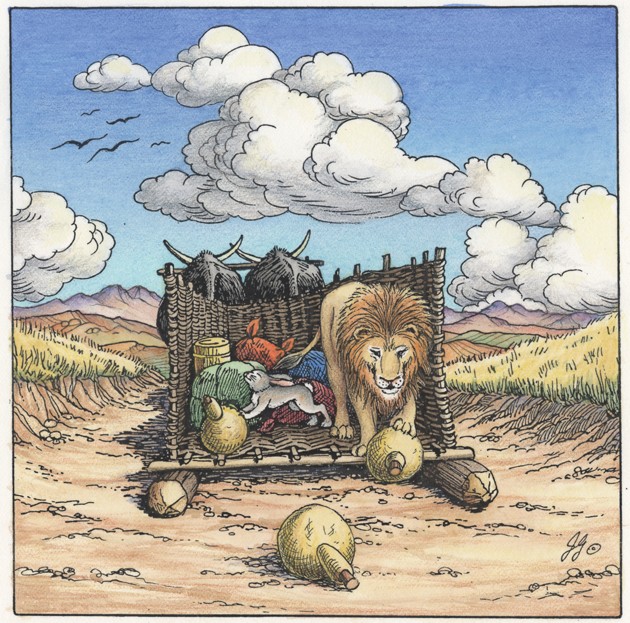 One day Hare said to Lion, “Oh, Mighty One, all creatures fear you. Let us hunt together. With you as my companion, the dogs will not dare bother me.”

Lion was flattered. “It’s true everyone fears me, but boys have spears, and fathers will punish me if I harm their sons.”

Hare had thought of that. Hare thought of everything. “Don’t worry. If we find ourselves in trouble, we’ll pretend we’re dead. No one will worry us then,” he said.

Puffed up with pride, Lion agreed.

The pair set off on a hunting expedition. Before they had gone far, they heard baying dogs. Dust rose in the road behind them. Hare turned and saw the dogs, nearly upon them. “Quick, lie down and play dead,” he said.

They threw themselves onto the ground. When the dogs reached them, they stopped and sniffed excitedly, but Hare and Lion stayed perfectly still.

The boys caught up with their dogs. “Leave them alone,” they said as they shooed the dogs away. “Someone must have poisoned the creatures.”

Just then a sleigh pulled by two oxen happened along the road. The driver called, “What have you there?”

“Only food for vultures,” the boys said. “Our dogs found these poisoned beasts lying in the road.”

“I could make use of those fine skins,” the driver said. “Help me load the bodies onto my sleigh.”

The man and the boys heaved Lion and Hare onto the sleigh, and the driver cracked the whip and set off.

As they bounced along the road, Hare carefully opened one eye. In the sleigh he saw sacks and three calabashes and he wondered what treat was inside. He nudged Lion. “Look!” He pointed at the calabashes. “There may be treasure inside.”

The driver’s attention was fixed on his oxen, so Lion and Hare rolled the calabashes from the sleigh and leaped off after them.

They lay in the long grass until the sleigh had slid out of sight.

They lost no time rolling the calabashes out of the road, and Lion ripped the plug from one. “Treasure! Hare, we are rich beyond our dreams! There’s honey inside!”

Hare stuck his paw into the honey, pulled it out and licked it delightedly.

“Wait!” Lion commanded. “I love honey, too, but let us save this for when food is scarce. We’ll hide it for winter.”

Lion raised a large, fierce paw. “That isn’t wise. Listen to me. Remember, I am mighty and all creatures fear me!”

At last they agreed and rolled the calabashes to a cave. They covered their hiding place with a stone and set off for home, pleased with themselves.

The next morning Hare woke early. As he was scurrying down the road, Lion called, suspiciously, “Where are you going, friend?”

“I’m off to see my aunt on an urgent matter,” Hare called.

Instead he hopped to the cave, opened the first calabash, and ate up all the honey. He filled the empty container with dirt and sand and hopped back home.

“Hello, Hare,” Lion called as he passed. “Why did your aunt send for you?”

“Oh, she’s a great one for christenings, and she wanted me to name her new child.”

“What did you name the child, then?” Lion asked.

The next day Hare announced his aunt had called for him again, and again he hurried to the cave and finished the honey in the second calabash. On the way home, Lion asked him what his aunt had wanted and he said, “Another christening.”

On the third day, Hare made a great show of being annoyed by his aunt, but this time, of course, he finished off the third calabash full of honey. When Lion asked what his aunt had wanted, Hare said, “Another christening.”

“And the name?” Lion asked.

One day Lion suggested to Hare that they go to find their secret hoard of honey. This they did, and when they opened the first calabash, they found only sand and dirt. This is what they found in the second one, too, and the third.

Lion roared with fury. “What wicked thief has stolen our honey?”

“Dreadful,” Hare said, shaking his head. “But who besides us knew of this hiding place? Perhaps one of us ate it in our sleep.”

Lion was deeply hurt hearing this. “I would never steal our honey,” he said, but at last he agreed it would be possible.

“Let’s test ourselves,” said Hare. “We’ll find out if either of us is guilty.”

Lion was a heavy sleeper, and that night as he snored, Hare rubbed a little honey he had set aside onto his friend’s whiskers and paws.

At dawn Hare woke Lion. “Let’s see what happened,” he said, and he made a great show of wiping his mouth and smoothing his spotless white waistcoat. “No sign of honey on me,” Hare said happily. “What about you, my friend?”

Lion was staring, shocked, at his sticky paws. He felt tears welling in his eyes as he tasted the honey on his whiskers. “I am so terribly sorry,” he said. “I don’t know how such a thing could happen, but I will make it up to you, my friend. I’ll hunt for both of us all winter long.”

Hare graciously accepted this offer, and he hurried off before Lion had time to remember all three calabashes were empty and that there had been no honey left for him to steal.