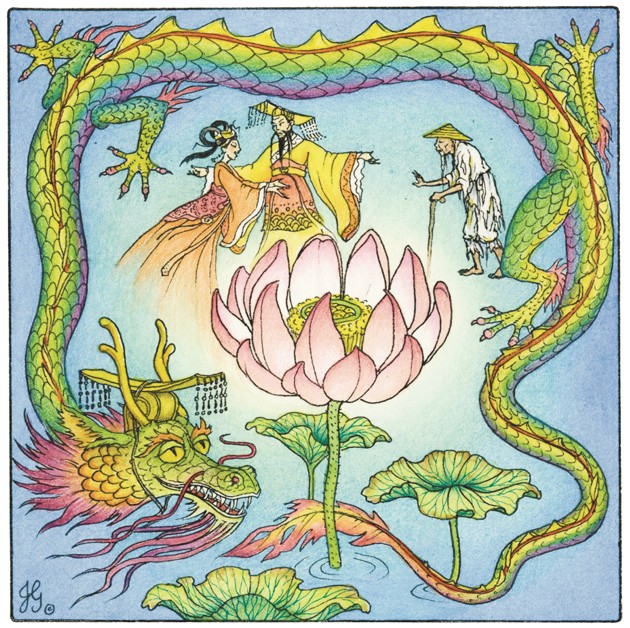 Long ago a poor old blind man in China had just one blessing, and this was his daughter, Shimchong. She was gentle and generous, a treasure who brightened her father’s dark life.

One day the old blind man was wandering in the woods on a familiar path when he lost his footing and fell into a water hole. He struggled to climb out, but he could not, and certain he would drown, he gave way to despair.

Suddenly a voice close by spoke. “Old man, if you will promise to give 300 bushels of rice to the temple in the name of Lord Buddha, you will be rewarded with your life, and your eyesight.”

The old blind man had long dreamed of seeing Shimchong’s face, and he wished to see the mountains, streams and forests of his country. And so he quickly said, “I promise,” and a moment later he felt strong arms pulling him from the water. He was certain it was the Lord Buddha who had saved him.

The old man blinked, awaiting the return of his sight, but this did not happen. Then he realized with terror what he had done. He could never afford to buy even one barrel of rice. He had offered a vow he could never keep, and he deserved whatever punishment came his way.

He stumbled his way home and wept as he told his daughter of his terrible mistake.

“Don’t worry, father, I will get you the rice for your offering,” his daughter comforted him. The next morning, before her father woke, Shimchong hurried to the market and approached the wealthiest merchant.

“I am here to offer myself to the Dragon King,” she told him, “and in return you must give 300 bushels of rice to the temple in my father’s name.”

The merchant was overjoyed. You see, for many years the Dragon King of the Eastern Sea had demanded the merchants give him a wife, but the merchants refused to sacrifice their daughters.

And so the Dragon King, in his fury, sent wild storms that churned up the sea and sank the merchants’ ships.

The merchants had offered a reward to anyone willing to sacrifice his daughter to the Dragon King. And here stood just the girl — only a poor girl, but beautiful. The merchant happily accepted her offer, and after his sailors had carried her to sea, the merchant sent rice to the temple.

It was only then the old blind man learned of his daughter’s fate, and still his sight did not return. Now, with nothing to offer him joy, he sank into a deep and boundless grief.

At sea, Shimchong was dropped overboard, and as she sank deeper and deeper, she expected to drown. But to her amazement, she realized she could breathe, and before long she saw the fabulous underwater palace of the Dragon King, and met the king himself.

Like all who saw Shimchong, he was instantly enchanted, and as time passed, he became a kind and loving husband. Together they lived happily beneath the calm sea.

But Shimchong often dreamed of her father, and whenever she thought of his heartbreak, she wept and gazed up toward the surface of the deep, deep sea.

The Dragon King loved his wife, and her unhappiness became his. “My beloved,” he told her, “I must set you free to return to the land so that you can once more see your father. But no one will ever accept that you are still alive, and so I will disguise you.” And with that he whispered into her ear and turned her into a beautiful lotus flower that drifted away from the palace.

That day a fisherman came upon a magnificent and most unusual flower floating upon the sea, and he decided such a treasure must be given to the emperor who ruled the land. This he did.

The emperor loved the beautiful flower. He carried it to the pond nearest his room, and there he often sat for hours, simply gazing with wonder at it.

Now one night the emperor could not sleep, and he stepped outside and wandered toward his pond. There he saw a lovely girl standing near the water. “Who are you?” he gasped.

Shimchong blushed. “My name is Shimchong,” she said, “I am the lotus flower you love.”

The emperor at once understood that he loved not only the beauty of the flower but the deeper beauty of this young woman. He came close to her and whispered, “Shimchong, marry me.”

“I will,” Shimchong said, for the emperor was a good man, and she had long enjoyed his company. But she did have one request. “We must invite every blind man in the country to our wedding,” she said.

On their wedding day Shimchong waited breathlessly as each person entered, and each time she saw a blind man, her heart fluttered. But each time she was disappointed.

“Why do you look so sad?” the emperor asked his beloved.

“There is one person I must see again,” she said softly and just then she heard footsteps behind her. She turned, and there stood her poor old father, dressed in rags, more sorrowful than any man she had ever seen.

“My father!” she cried, and she embraced him. And in that moment, the man’s sight did return, and for the first time he saw his beloved daughter, and his joy knew no bounds.

The next day, several of the merchants’ ships returned to port, and all the sailors remarked on the gentle waves of the Eastern Sea.