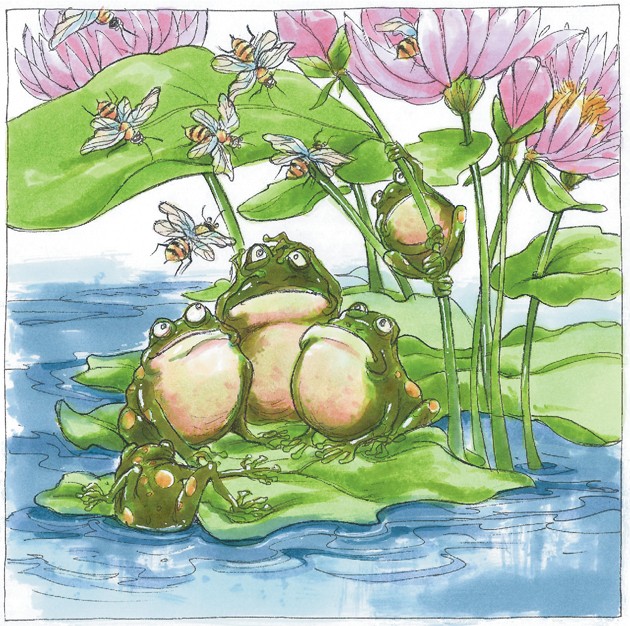 September 6, 2016
The Lotus Flowers and the Frogs

Once upon a time in India, there was a beautiful pond filled with lotus flowers beside a palace. Whenever the lotus flowers blossomed, the bees came from near and far. Those bees swarmed the flowers, enjoying their sweet honey, and the air filled with the sound of satisfied buzzing.

Whenever this happened, the frogs that lived all year long in the pond would wake to the sound of buzzing, and they sat at the edge of the pond, staring in wonder. This happened year after year, but each time the frogs asked themselves the same question:

“How did the bees learn about the honey?” they whispered.

“Who told them this was the time to come?”

“The moment we open our eyes, there are the bees. How do they know?”

At long last, the Frog King called a meeting to answer the frogs’ questions. “The bees,” he declared, “must be the wisest creatures in the world.”

And so, the king said, we can learn from the bees. They have secrets to offer the world. The king’s advisers suggested that all the frogs spend their time observing the bees.

“Stay quiet. Sit very still. Keep your eyes wide open,” said one of the king’s advisers. “Do not stop watching and listening. Observe everything you can, so that we can learn the bees’ secrets.”

And so, every year, when the bees arrived and began to swarm the lotus blossoms, the frogs grew still. They squatted at the edge of the pond and watched. They listened. Some of the bravest frogs sometimes swam close to the flowers and tried to understand the meaning of the bees’ language. When the bees were gone, they gathered and discussed what they had learned.

“The bees certainly buzz,” the frogs all agreed. “Perhaps if we learned how to buzz, we would be wise, too.”

At night, the frogs practiced buzzing. But no matter how hard they tried, the sounds they made did not sound like that soft, gentle buzz of the bees. They filled the night air with squawking, rather than than buzzing. It was too loud, too high and too fast. They practiced all night long, and in the morning they were exhausted. But they were no wiser.

At long last, the Frog King decided he must speak to the Queen of the Bees. “I will meet with her and ask her how they know when the lotus flowers will blossom.”

That year, he waited until the first lotus blossomed. Sure enough, the bees appeared at the pond and the air filled with their sounds.

The Frog King greeted the first arrivals: “Welcome back. How are you? So good to see you. Please, tell your queen I request the honor of her presence in my home.”

The drones told their queen of the invitation. She was delighted. The frogs had never been hospitable; they seldom invited others to their pond, and as far as anyone knew, no one had ever been invited to the Frog King’s home.

The next day, the Queen of the Bees flew to the Frog King’s home at the edge of the pond, just beside the palace.

“Welcome,” said the Frog King, “I am glad you have come to my home. Please, help yourself to the honey I have collected for you.”

The queen was deeply touched seeing the bowl of honey in the Frog King’s home.

“Now,” he said, “I have a very important question to ask you.”

The Queen of the Bees bowed. “Ask me anything. I am pleased that the frogs have welcomed the bees. It is far more pleasant to be friends than foes.”

The Frog King agreed. “It is, but let me tell you what is troubling us. We live in the pond beside the lotus flowers. We sleep beside the flowers, too. Still, we never know when they will blossom, and we do not know where you live.”

“Far, far away,” said the queen, “but we seldom stay in one place for long. When we smell the lotus flowers, we make our way here.”

The Frog King nodded. “So you say you smell the lotus blossoms?”

“Yes,” said the queen. “Their scent is powerful and travels across the wind. That is what lures us to this place.”

The Frog King was amazed. He and his frogs knew the pond was a lovely place. They proudly observed their home. They listened to the sounds around them. They tasted and touched what they saw. But they had never thought to use their sense of smell, and they had never noticed the sweet scent of the lotus blossoms.

The next day, the king told the frogs the secret of the bees, and they were astonished. And from that day on, the frogs paid closer attention to the sweet scents of their world, and life became still more beautiful.