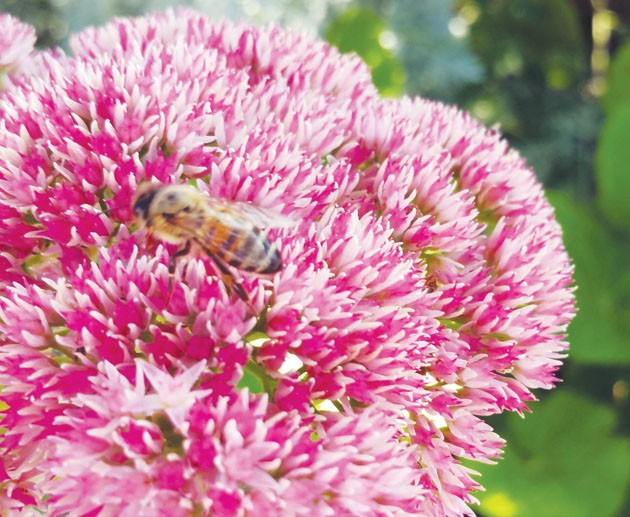 A foraging honeybee begins the process of honey production by sipping up nectar.

Last week’s article gave the historical view of sugar and sweetening in the human diet and how in the past there was much higher dependence on honey and fruit. Later on, as white processed sugar became more available (in the 1800s or so), it was used to further sweeten fruits when jams, jellies, spreads and other sweets were made.

Today, white processed sugar is readily available and is firmly entrenched in the human diet, but it does face competition from artificial sweeteners, agave and stevia-based products, and from the biggie: high-fructose corn syrup (HFCS).

After publishing the article, I was reminded of another historical sweetening mainstay, one that is highly desirable yet to this day. No, I’m not talking about honey — we’ll get to that shortly! This product is still a heritage craft that is highly sought by connoisseurs, and of which there are imitation forms sold every day at the grocery markets. Heck, Maggie and I even make a homemade knock-off version in our kitchen using flavorings, white sugar and water. What can this product be? Maple syrup, of course!

Last week, we had the opportunity to be volunteer staff at the beekeeping booth and display at the Utah State Fair. We were there for two different four-hour assignments. Let me tell you, it’s heartening to see the strong interest in bees, beekeeping, honey and pollination! There was no time to rest as there was a constant stream of people, young and old, that stopped by. The amount of engagement was greatly helped by the fact that bees could be observed in a large and active observation hive. There was an outside port connected to the colony with large-diameter clear tubing, so the amount of activity was very visible.

So, this was the real thing, with pollen, nectar, water, and plant resins all being brought into the hive by the foraging bees. At the same time, the queen was busily laying eggs, others were capping larvae, bees were being born, bees that have died were carried out, and honey was being produced. There’s a reason “the talk” we have with youth is euphemistically termed, “the birds and bees!”

In the middle of all this, a really friendly couple from West Jordan approached me and we began to talk. In just a few moments, they asked me if I like maple syrup — the real stuff! I said, “of course! Why do you ask?” They went on to tell me that they would like to trade some genuine maple syrup for honey. They have buckets of maple syrup. That got my interest up. How is that this couple, in their retirement years along the Wasatch Front, has bulk amounts of syrup in their possession?

As it turns out, William and Joan moved to West Jordan from upstate New York — where they lived right on the St. Lawrence Seaway. They had a large stand of sugar maples. In fact, the property is still in their family, continuing the tradition of making homemade maple syrup from the sap that runs in these trees in early spring. As I was talking to them, I realized that I had made a faux pas in not including syrup in last week’s article as an important sweetening source. I’ll make it right in the near future, as I am planning on having an interview with this delightful couple and will give you all the insights I learn on the art of crafting maple syrup. Watch for that one!

In the meantime, after talking to so many about bees and honey this last week, it became apparent to me that further information about how honey is made and what it is (as well as what it is not!) is in order.

Suffice it to say, there is a lot of misinformation and folklore out there when it comes to honey and the bees that produce it. Honeybees are only one of hundreds of pollinators that are important to our environment. That isn’t to say they aren’t important in that role — because they are. Rather, it’s good to know that the role of pollinating doesn’t fall solely on our honeybee friends.

When you see worker bees outside of their hive, there are only a limited amount of reasons for them being there. Besides swarms that you may see in the spring (a natural method bees use to multiply colonies and existence of future bee generations), in most cases, you will see bees foraging for one of four things.

Water is key and is needed for a variety of purposes, including honey production and for cooling in the hive. Pollen is an important food source and is the bee’s protein source. The gathering of pollen, typically from one type of plant or tree at a time, is what makes the honeybee a particularly effective pollinator. Once pollen is collected, it is put into cells in the hive and covered with a thin film of nectar. This combination possesses antibacterial properties, keeping the pollen fresh and digestible for an extended time.

Plant resins are also harvested by the forager bees. Bees use this to produce propolis — bee glue! Bees take the resin and mix in a bit of saliva and beeswax to create this substance that is used to stabilize the hive and fill in small gaps and alternative entrances.

That leaves us with nectar. Nectar is the sugary substance that plants produce in their flowers. The blooms contain sugar-producing structures called nectaries. The nectar attracts pollinators, assuring necessary pollination for the plant. Common nectar-lovers that provide pollination include our friends the bees, but also butterflies, wasps, moths, bats, and a garden favorite — hummingbirds.

Why are such a wide range of creatures attracted? Well, the word nectar, originally meaning something like “drink of the gods,” gives a clue. The main ingredients of nectar is a combination of water and natural sugars. Nectar is about 80 percent water and 20 percent sugar. The sugar portion is about 55 percent sucrose, 21 percent fructose, and 24 percent glucose.

Honeybees harvest the nectar by storing it in their honey crop and transporting it back to the colony. When the nectar is in the honey crop, enzymes are added to it that begins its transformation into honey. It is transferred from the foraging bee to house bees, with more enzymes being added and water being reduced. Finally, it is placed in cells and fanned to further evaporate moisture and increase the viscosity of the honey. When cured, it is wax-capped for future use.

Because nectar is swallowed, some have come to believe that honey is “bee vomit.” Not even close! A bee’s honey crop is a separate organ from its stomach. If a bee needs nourishment, it can allow some of the nectar to move into the digestive stomach and ultimately out the gut. However, this is a one-way path as the honey crop has a special valve between the crop and stomach. This allows the bee to move nectar back out to the waiting colony, or to further swallow some of it for energy. However, it once the nectar moves from the crop to the stomach, there’s no turning back!

Honey, then, is not in any way, shape or form, vomit. It has none of the characteristics of vomit, including texture, smell or putrefaction. So, if you’ve possessed this misunderstanding, you can get that out of your mind and enjoy the next serving of honey without any hesitation!

There are some other really interesting facts about bees. There are only three types of bees in the honeybee colony: drones (fertile males), worker bees (infertile females) and queens (fertile females). Under usual circumstances there is only one active queen at a time in the hive. A queen lives approximately 5 years, but is at her prime of laying eggs at two or three years. During warm months, she will lay between 1,000 and 2,000 eggs per day, laying about 100,000 eggs in her lifetime! An adult bee emerges about 21 days after eggs are laid. Worker bees live about 35 days during the warm months of the year. The population of the hive will be as high as 60,000 bees during honey flow and will drop to an overwintering population of half or less.

With so much to see, learn and enjoy (this article is only touching on the subject), no wonder beekeeping is so addictive! And besides all that, that fresh honey…