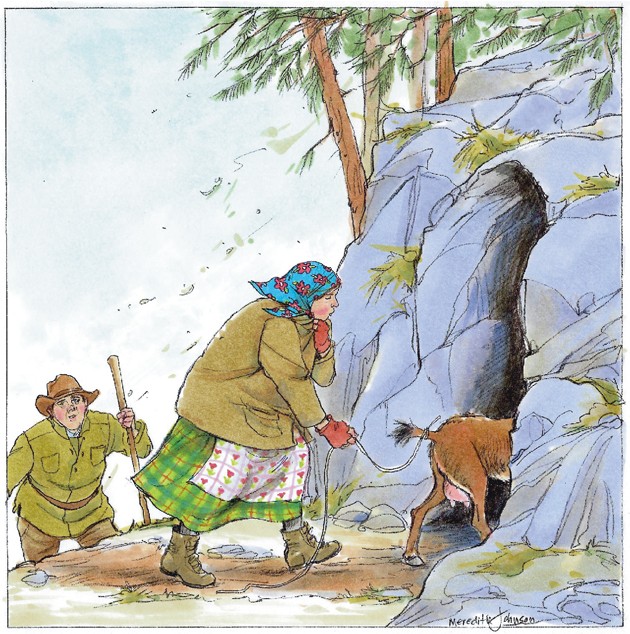 Once upon a time, Nadav lived in a Polish village with his wife, Milena, and with his elderly father. One day, Nadav woke up feeling ill. Milena at once sent for the doctor.

“You must drink goat’s milk,” the doctor advised.

Milena hurried to the market and bought a goat and began to feed her husband fresh goat’s milk. Soon after, Nadav was growing stronger and feeling better.

One evening, Milena walked out to the field to lead the goat back to the barn. But she was nowhere in sight.

Milena ran to tell Nadav, and together they set off on a search. They did not find the goat in the fields or in the yard, in the garden or near the spring.

“We have lost her,” Milena wept.

Nadav comforted his wife. “We do not know the meaning of this loss,” he said. “We must trust in God. Sometimes things are not as they seem.”

A week passed, and on the seventh morning, Nadav walked outside to look one more time for the goat, and there she stood, her udder swollen. When he milked her, she gave twice as much milk as she ever had.

Nadav tasted it and cried to his wife and father: “Come, taste this! It tastes like heaven.”

They each took a sip and had to agree. This milk was sweeter and thicker and more delicious than any they had ever tasted.

Alas, the next day the goat was gone again. Once more, Milena and Nadav set off to search of her. She was not in the fields or at the spring or in the hills. Once again, they mourned and prayed for the best.

Days passed again, until on the seventh day she reappeared, her udder full of milk that tasted like honey.

As they drank, Milena looked at her husband, whose strength was returning, and said solemnly, “We must find the source of this milk. I have a plan.”

She took a length of cord from the cupboard. “We will tie this to the goat’s tail, and when I feel a pull, I will know that she is leaving again. We will catch the end and follow her.”

Nadav smiled. “You are a wise woman.”

Milena tied the cord to the goat’s tail and paid careful attention. One morning before dawn the goat set off, so Milena held the cord until it was taut. Then she woke Nadav.

“Come, we must follow the goat,” she said. “We will let your father sleep.”

Despite the bitter cold weather, they set out following the goat as she walked into the dark forest. When the goat climbed a steep hill, Nadav and Milena followed her. On and on they walked. Then, just before dusk, the goat reached a dark cave and walked inside.

Despite their fear of entering this dark place, the couple huddled together and walked inside. “God will protect us,” Milena whispered, and Nadav squeezed her hand. “With you beside me, I am strong.”

They were unable to see ahead, but could hear whispers, shrieks and threats coming from the darkest corners, which they chose to ignore.

After they had walked for some time, they saw a bright light in the distance and heard the goat moving toward it. Stones tumbled down from the walls, but Milena whispered in her husband’s ear, “Let us not be afraid.” They followed the goat all the way to the light.

But the goat kept walking, and they trailed her until at long last they felt the air grow warmer. At the far end of the cave, they walked out into light. There they stood in a valley of rich green grass surrounded by lofty mountains and flowing waters. The wind smelled like perfume, and everywhere there were trees thick with fruit. Nearby they saw a shepherd playing his pipes.

“Where are we?” Nadav asked the young man.

“You are in the land of Israel, near the city of Safed, the holy city,” the young man said.

Nadav and Milena could not believe what they were hearing. Could this be real?

When he had gathered his wits, Nadav knew what he had to do. He sat down to write a note.

“Father,” he wrote, “I followed this cord tied to this goat’s tail, and it led me to the land of Israel. Follow this goat and come join us. Bring our people with you.”

He rolled the note up and placed it in the goat’s ear.

“When the goat returns to our house,” Nadav explained, “my father will find her and pat her head. She will flick her ear and the note will fall out, and he will find it. The goat will lead my father and all our people here.”

True enough, they watched as the goat walked back into the cave. Eventually, she made her way back to Nadav and Milena’s home.

Nadav’s father, sick with grief over his missing son and daughter-in-law, saw the goat standing outside, but he did not pat her ear. Instead, he began to wail, “What have you done with my son? You must be the devil! You have led my son to his death!”

In his anger, Nadav’s father decided the goat must be taken to the butcher to be slaughtered for meat.

After the goat was dead, the butcher and Nadav saw the note that had fallen out of her ear.

Nadav’s father recognized his son’s handwriting. As he read his son’s words, he wept harder than he ever had. Now he understood that he had lost his son forever and he had lost the chance to find the magic cave leading to the holy land.

He took the note to his rabbi, who kept the note in the synagogue. The rabbi wisely passed that note on, so it would be read by the next generations. They, too, would learn of Nadav’s father’s grave error.

Sadly, that note was eventually destroyed by wars.

Still, the memory of the magic cave remains.