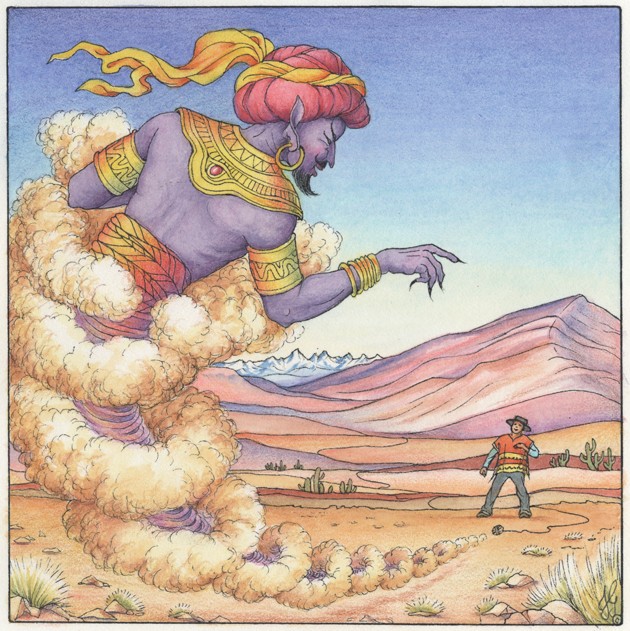 Once upon a time in Chile there lived a boy named Arturo who was raised by his father. Arturo’s father was a loving, generous man, and though he was poor, he taught his son to love life. “The world is full of magic,” he said, “if we keep our eyes wide open and look for it.”

Alas, when Arturo was only 10, his father died, and he was all alone in the world. He found work for a farmer, and he always worked as hard as he could, and he sang as he worked.

A man named Jorge, one of Arturo’s fellow farmhands, envied the young man. Jorge was lazy, and he liked to complain.

“Keep your eyes open and look for the magic,” Arturo told his fellow workers, and Jorge scowled. When he noticed the farmer gave Arturo the best jobs and fed him the finest cuts of meat, he decided he must get rid of the young man.

And so one day Jorge spilled every bucket of milk in the goat barn. When the farmer saw the mess, he said, “Who has done this?”

Jorge looked down at the ground. “Tell me,” the farmer said.

“If you do not tell me who has caused this trouble, I will fire you,” he threatened.

Jorge shook his head. “I cannot tell,” he said. “He is too young to lose this job.” The farmer then understood that the culprit must be Arturo. That very day he let the young man go.

And so Arturo was without a job, but instead of complaining, he set off traveling around the country, searching for the magic in the world. He hired himself to this farmer and that miner, to this housewife and that merchant. For years he worked like this, scraping together a living.

One night, after a long day of labor in a coal mine, he fell asleep. As he slept, he dreamed of an old woman sitting by a fire. “I am your good fortune, Arturo,” the woman said. “As you are traveling, you will meet a stranger. Make sure you help him, no matter how strange the request you hear.”

When Arturo woke, he smiled, for he sensed this was the magic he sought. He set off on his way.

As he walked along the road, he suddenly heard footsteps behind him. He turned to see a young man rushing toward him, calling, “Senor, Senor, please help me. My wife is having a baby, and we have no godfather. Please, will you be my child’s godfather?”

This was a strange request, indeed, but, mindful of his dream, Arturo agreed, and he hurried with the young man to his home.

The baby was a beautiful little girl with wild curls and a face as bright as the full moon, and Arturo was named the official godfather. That night the little girl’s father, too excited to sleep, began to tell Arturo tales of strange dreams he had been having.

“I dreamed I was to travel to the very center of the Atacama Desert. There I was to find a ball of yarn, toss it over my shoulder and follow it wherever it led, and it would take me to a genie who would reward me with all the money I could ever desire.”

The young man chuckled to himself. “Of course there are no such things as genies,” he said. “It was a foolish dream.”

“But you ought to go,” Arturo said. “We must keep our eyes and hearts wide open, for there is magic in this world.”

Again the young man laughed. “So you may believe,” he said.

But Arturo could not stop thinking of the desert and the ball of yarn and the genie. So he decided to visit the desert. This he did, and before long he came upon a ball of yarn. He tossed the yarn over his shoulder, and followed it. Sure enough, there, in the very center of the desert, he found a genie.

He approached and introduced himself. “Dreams have sent me to find you,” he said. “I am Arturo, and I was wondering if you have money you are supposed to give to a man?”

The genie led Arturo to a cave, and there they came upon sacks and sacks of gold. “This is yours,” the genie said to Arturo.

“Thank you,” Arturo replied graciously. He worked for many days, constructing a wagon. He loaded his wagon with the coins and pulled it all the way to his goddaughter’s home.

“This is our wealth,” he announced to the young man and his wife. “It is the fortune of which you dreamed.”

The young man and his wife were amazed, and so very grateful that they gave Arturo half of their fortune. “Without you we would have nothing,” they said.

And so Arturo became a wealthy man, but he continued to travel. Everywhere he went, he shared his wealth, and he taught people to keep their eyes wide open, watching for the magic of this world.