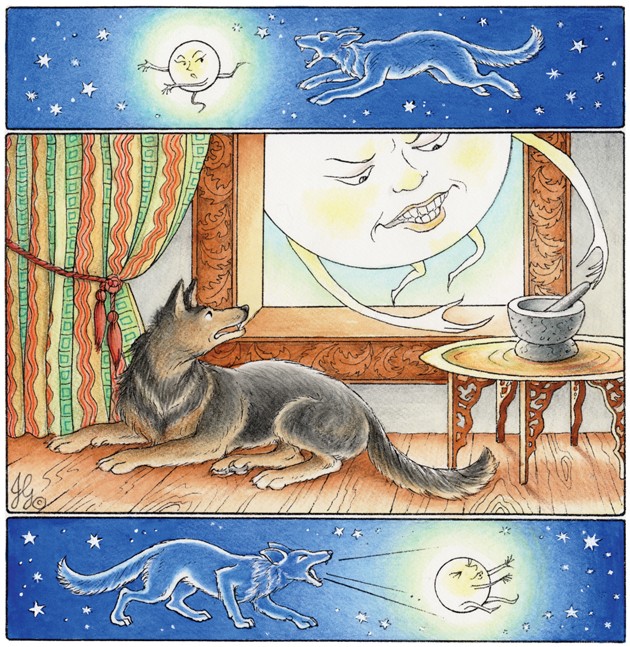 Once upon a time an old woman named Nu awaited Death. She was not afraid. Her life had been long and happy. But she was poor and owned little, and she so loved her grandson, Than, that she wished to leave him something.

“I have only one thing,” she told her grandson, and she handed him her cherished pestle. “Guard this,” she said, and he promised he would.

When she passed away, Than kept the pestle close, always. Looking at it he recalled his grandmother’s kindness, her smile, her generous spirit. Whenever he felt sad, the pestle lifted his spirits.

One day he was carrying the pestle in his bag — as he always did — when suddenly he saw a snake in the road staring him directly in the eye. “You, there,” the snake said. “May I borrow your pestle?”

Than was speechless, but the snake was not. “I promise I will return it. I just want to borrow it.”

“What would a snake do with a pestle?” Than asked. “This is my treasured possession. I can’t let it out of my sight.”

But the snake did not let up. “Last night my beloved wife died. I’m afraid that I will die of loneliness, and I only wish to borrow your pestle to restore her to life.”

Than almost laughed. “Nothing can restore her life if she has died.”

The snake bristled. “Let me prove you wrong,” he insisted, and Than’s curiosity overcame his fear. “Fine, but I must go with you. I do not want you to take my pestle away.”

“Follow me,” said the snake, and they went through the forest until they came to a spot in the road where a long snake was coiled in the road, lifeless.

“Please, touch the pestle to my wife’s nose,” the snake begged Than.

Than bent and touched the nose of the snake with the pestle, and the moment he did, the snake’s body shivered and shuddered as life returned. She raised her head and looked at them.

Startled, Than jumped back.

“There, you see,” the snake said, “you have brought her to life. Your grandmother was our friend. Every forest creature loved her. But now that you know the secret of her prize, you must never to tell a soul. If you do, the magic will vanish!”

Than walked home thinking of this miracle, wondering if it could be true. When he was nearly there, he saw a dead frog lying in the road. Looking around to make sure no one could see, he bent and touched the nose of the frog with his pestle. Sure enough, the frog came back to life.

“Thank you!” the frog croaked. “And may I take you to my friend, the dog?”

The frog led Than to a dog lying beside a hay bale in a barn. Than’s heart nearly broke at the sight of the lifeless creature. But once again he touched the pestle to the dog’s nose, and the creature came to life.

Ever grateful for this gift of life, the dog vowed he would be Than’s faithful friend, forever.

Over the weeks and months that followed, Than brought many creatures back to life, and word began to spread of this young man’s magic.

Soon the king called Than to appear before him.

The king’s daughter was dying. “Save her,” the king begged, “and I will give you half the kingdom and her hand in marriage.”

Just as he had saved so many, Than saved the princess. Delighted by his good fortune, every evening he offered prayers of thanks to his grandmother and her magic pestle. And he kept the secret.

Than and his wife were happy, but some years later Than noticed they were growing old, moving more slowly. He began to wonder if his magic pestle might offer another gift. If it could bring life to the dead, perhaps it could return youth to the aging?

Every day he dreamed of being young again, and so one night when his wife was fast asleep, he unwrapped the pestle and touched it to her nose.

Suddenly her skin turned smooth, her back grew straight and strong.

Than knew he must keep this a secret; however, he did not know that the Moon had been watching all this through the window. From her place in heaven, she exploded with jealousy. “Everything must age and die!” she cried. “It is not right that a mortal should have such power. Only the heavenly bodies remain as we have always been. I must steal that pestle from him!”

When Than’s wife woke, she was amazed at the changes, but Than refused to tell his secret. Alas, he was more and more attached to his pestle; he would not let it out of his sight. And after a while, his wife became irritated by his obsession. “You seem to love that pestle more than you love me!” she said, accusingly.

“Leave it behind while we visit my father,” she insisted.

Than did not know what to do; he could not refuse his wife, but he feared leaving the pestle alone, and so he asked his faithful dog to keep watch, and he and his wife departed.

The Moon saw her opportunity. It was daylight, so she was invisible, and when the dog turned his head, she slipped to Earth and snatched the pestle.

Seeing the pestle rising into the sky, the dog began to bark, but the Moon rose higher and higher, faster and faster.

The dog leaped into the air, chasing the pestle. And as he ran, he too rose higher and higher, following the pestle into the sky.

To this day the Moon races across the sky and the dog chases after her. Now and then the dog catches the Moon and swallows her, and then the world grows dark. But the Moon grows too big for his throat, and so he coughs her free again. Once again the chase begins.