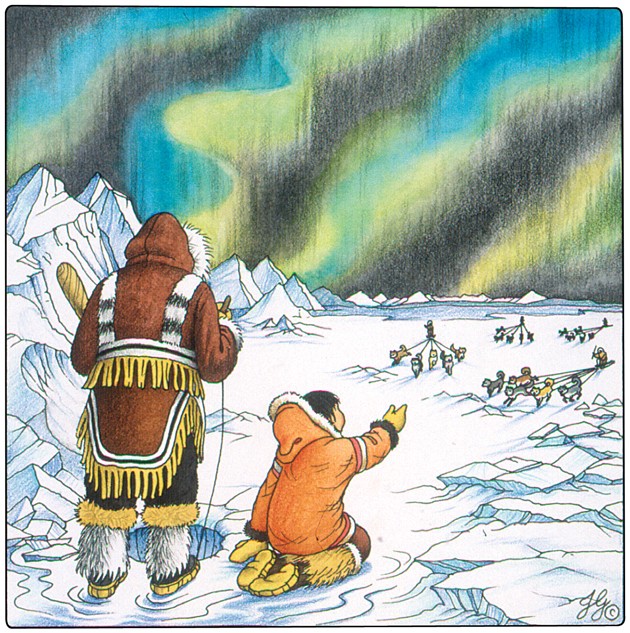 Once upon a time in a fishing village in the far north, the earth heaved and ice floes crashed into the land. The people were so frightened, almost everyone ran away. But the wise shaman stayed behind. He loved his land and did not want to leave, despite the great upheaval.

As the people fled, one young boy turned around and saw the shaman sitting amid the chaos. He cried out to the shaman, “Run away, our village is being destroyed, and you will die!”

But the shaman only smiled. “My magic will protect me,” he called to the boy.

When the boy heard these words, he stopped. He could not bear to leave the shaman all alone, and something in his stillness moved the boy. “I will stay with you,” he said.

All the others ran away, but the shaman and the boy stayed where they were. They survived that terrifying night, and when the first rays of sun touched their faces, they woke and knew they were safe.

They looked around. The world was still. But when they peered into the sea, they saw that all the fish had disappeared.

The shaman shook his head at the sight. “I am an old man, and I no longer walk under the water and talk to the sea creatures,” he said so softly that the boy had to lean close to hear.

“Then we shall starve!” the boy said, shivering with fear.

The old man smiled at him. “No, we will walk over the mountain and fish in our neighbors’ bay.”

The boy shook his head. “But they will harm us if we steal their fish. We must not do that.”

Again the shaman smiled. “I will teach you to fight with magic,” he said. “You will learn how to use the magic spear that will protect you, always, from your enemies.”

And so the two set out to cross the mountain. They walked for many days, and when at last they reached the far side of the mountain, they were weak with hunger. They looked out at the sea of ice. Although it was nighttime, the northern lights flashed beams of light and color across the sky so that the world looked as bright as day.

The two quickly chopped a hole in the frozen sea and dropped their hooks into the water. Down below they saw all the fish that had fled their own bay, and the boy smiled with pleasure. “Soon we shall eat again,” he said.

Across the ice, hunters spied the two intruders, and they hitched their dogs to sleds and raced across the ice to stop them from stealing their fish. Two mighty men led the group, men so strong and fast that they soon were far ahead of the others.

When the boy saw the hunters racing toward them, he cried out, “What will we do? They’re going to kill us.” He could feel the rage in their approach. “You haven’t taught me to use the magic spear.”

The shaman simply smiled. “The magic spear is words,” he said softly. “When the men reach us, you must say these words,” and he leaned close and whispered in the boy’s ear.

The boy wailed. “That will never help! Words cannot fight men like those two,” and he pointed toward the fierce men charging forward.

“Words are good magic,” the shaman said just as the sleds pulled up beside them.

“Why are you stealing our fish?” the taller man roared.

The shaman looked him in the eye. “Our fish swam away, and we were hungry.”

“You will pay for this theft,” said the other hunter angrily, and both men lifted their spears.

The shaman shook his head. “You will not harm us for we are protected by magic. This boy has magic.”

The mighty hunters stared in disbelief. “A boy cannot have magic. He is too young and inexperienced.”

“Ah, but he is a great shaman,” the shaman answered. “He has a secret medicine that is all-powerful.”

The men turned and looked quizzically at the boy. “Tell us your secret,” they demanded.

The boy began to tremble with fear, but he remembered the shaman’s words, and so he said, “I can tell my secret only to the mightiest of hunters. Which of you is stronger?”

“I am the strongest!” said the tall hunter.

“Ha,” the second man scoffed, “I am far stronger than he!”

The two hunters began to argue with each other. The first one bragged, “I am the greatest,” and the second one shouted, “I am a far better fighter than you.” The taller man pushed. The shorter man shoved in return. Their fury grew. They lunged at each other, and they began to fight. Blinded by rage, they fell into the fishing hole and disappeared under the ice.

Moments later the other hunters appeared and demanded to know where their leaders had gone.

“The boy sent them away with magic,” the shaman said. “He possesses the magic spear of words. Would you like to hear him speak those words?”

The hunters looked alarmed. “No!” they cried, for they knew anyone who could send away their leaders must have more power than they.

“If you will allow us to fish your waters until our fish return, the boy will spare you,” the shaman said.

The hunters agreed, and that is how the boy learned the strong magic of words.

As the years passed, he grew wiser still in the ways of language, and he used its power to live in peace with his neighbors and in harmony with the land around him.