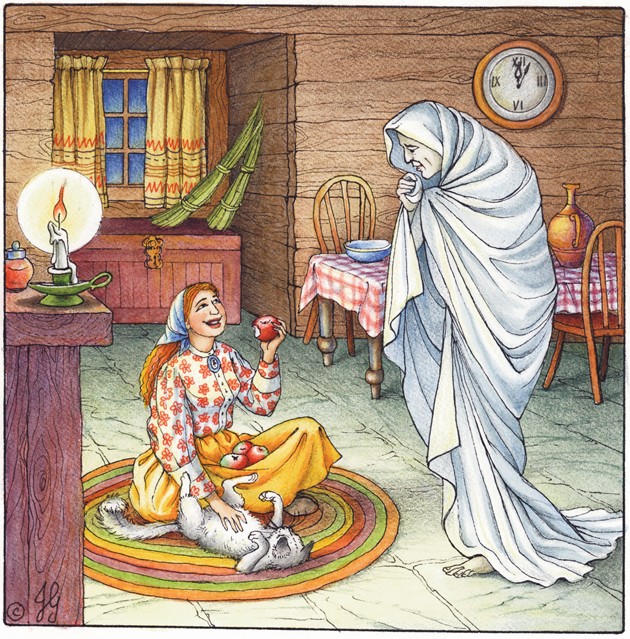 Once upon a time a poor peasant woman had three daughters. One day the eldest daughter, Raisa, said, “Mother, I’m off to seek my fortune.” Her mother baked a cake and cooked a chicken, and handed them to her daughter. “Take half with my blessing,” she said, “or the whole with my curse.”

Raisa frowned. “The whole is little enough,” she said, and off she went. Her mother did not curse her, after all, but she did not give her a blessing either.

Raisa walked until she was hungry, and she sat down to eat. A poor beggar woman came by and asked if she could have a bite or two.

“It’s too little even for me,” Raisa said, and she ate it all up.

She walked on until she reached an inn where she stopped for the night.

“I’ll give you a spade full of gold and a shovel full of silver if you’ll watch my son’s corpse,” said the innkeeper’s wife. “He’s in the next room.”

She stayed up, and once in a while looked at the corpse lying — strangely enough — beneath the table. Just past midnight, the corpse suddenly sat up. He stood, wrapped himself in a shroud and walked across the room and asked, “All alone are you, fair young woman?”

Raisa did not say a word. She simply stared until the corpse struck her with a switch and turned her into a bundle of thin leaves.

A week passed, and no one heard a word from Raisa, so her sister, Shoni, said, “I’ll set off into the world to seek my fortune. Pack me a bag.”

Once again her mother baked a cake and cooked a chicken, and when she handed it to Shoni, she offered her a blessing with half or a curse for the whole. Shoni took everything, and just as everything had happened for Raisa, so it happened for Shoni. She too was turned into a sheaf of leaves.

Another week passed. Now the youngest daughter, Libi, decided she must find her sisters. Libi’s mother offered her a curse or a blessing, and Libi gave her mother half the cake and half the chicken and said, “Mother, your blessing is all the nourishment I need.”

Libi’s mother blessed her. That evening when she stopped to eat and the old beggar woman asked for a bite, Libi gave her half of everything. “There is no more nourishment in life than the opportunity to help another,” she said.

That night she stopped at the very same inn where her sisters had stayed. She too agreed to watch the corpse. She sat eating the apples the innkeeper’s wife had left her. To amuse herself, she played with the cat.

“It’s such a pity he’s dead,” Libi said to the cat. “That corpse is so handsome; he’s just the sort of man I’d like to marry.”

When, just after midnight, the corpse suddenly sat up, Libi said, “Have you something to say, young man?”

When he wrapped himself in the shroud and walked toward her and said, “All alone are you, fair young woman?” she laughed. “Alone? No, not at all. I have the cat and my apples. I have nearly everything a girl could wish for.”

The corpse laughed too. “You’re brave, aren’t you? Are you brave enough to follow me across the quaking bog and through the burning forest and into the cave of horrors and up the mountain of glass and down into the Dead Sea?”

“I’ll have to because I promised to mind you,” Libi said, and when he leaped out of the window, she followed him. At the foot of the tall green hills, he began to chant, “Open, Green Hills, and let the light through.” To which Libi replied, “Let the fair maid through, too,” and the hills opened, and Libi followed the corpse inside to the edge of a bog.

The corpse began to walk across the bog. Libi wondered how she would follow, but just then the old beggar woman appeared, though now she was dressed in a fair gown. She touched Libi’s shoes with her stick. “Go on,” she said, and Libi saw that the soles of her shoes had spread so wide that she could easily walk across the marsh.

On the far side of the bog was a burning wood. There the beggar woman covered Libi with a thick damp cloak, and through the fire Libi ran with ease. Inside the cave of horrors, darkness surrounded them; ghouls and goblins and ghosts shrieked, but Libi heard nothing, for the beggar had stopped up her ears with wax. Libi saw the monstrous things and felt the slithery snakes and frogs, but she wasn’t afraid.

At the end of the cave there was a steep mountain of glass. The beggar gave Libi slippers so sticky she easily followed the corpse to the very top, and there, a mile below, she saw the sea.

“Go home,” the corpse said, “and tell my mother how hard you tried to follow me,” and he leaped off the mountain headfirst, down, down to the sea.

But Libi kept her promises, so she leaped too.

When she hit the water, she sank down, down, down till deep under the sea she saw a bright green light. She followed the light, but its effect was mesmerizing and before she knew what was happening, she fell fast asleep.

When she awoke she was in bed at the inn, and the corpse and his mother were sitting at her bedside watching her.

“You saved my son!” the mother cried. “A witch put a curse on him because he wouldn’t marry her. She had the power to keep him between life and death until a young woman rescued him. And now you have!”

The mother gave Libi her spade full of gold and her shovel full of silver, and the corpse who was now very much alive asked her to marry him.

“I will,” Libi said, “but let us bring my sisters back to life.” Because she had broken the curse, every wish she made came true.

Everyone lived happily ever after, though people say the sisters never did become as good as beloved Libi.