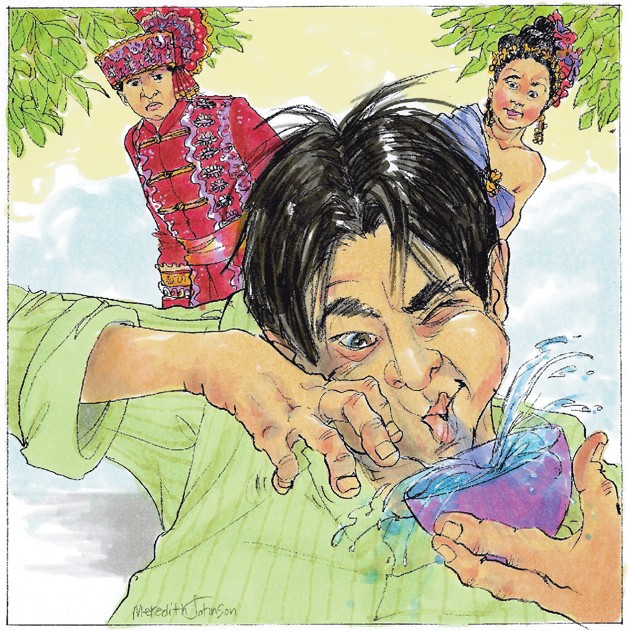 (A Folktale From Thailand)

Once upon a time, a young man named Sunan was traveling aimlessly when he came upon an old beggar at the side of a lonely road. Sunan’s heart went out to the man. He stopped and said, “Sir, I have little, but I wish to share my bread and water with you. Eat heartily.”

The beggar ate, and when he was finished, Sunan bowed and prepared to leave, but the man seized his hand. “Wait, I wish to thank you properly for your generosity. I offer you a magic spell that will be useful to you.”

Sunan was skeptical, but he could not say no, and so the beggar gave him the magic words. “Say these words and you will grow any kind of fruit you wish at any time. But take care to follow all my directions.”

He went on to explain that Sunan must be sure to carry a bowl of water when he recited the spell, and he must blow on it afterward and pour the water on the root of the tree.

“If you know this spell, why are you starving?” Sunan asked, but the man simply closed his eyes and said this: “Please, just listen. Respect my wishes for the rest of your life, or the spell will be broken.”

A few days passed when Sunan entered a great city, and as he was walking down the main street, he heard trumpets sounding and men shouting, “The king is making an announcement today!”

He hurried to follow the crowd to the steps and found the king’s wise men standing there. “The king wishes to give a reward to anyone who can bring the queen a mango.”

This was late autumn, and everyone knew there were no mangos growing anywhere, but when Sunan heard these words, he thought of the beggar and his magic spell.

“I will find a mango for the queen!” he cried.

The wise men smiled. “Very well,” they said. “And where will you find this mango?”

Sunan said, very calmly, “Take me to the palace garden, and bring me a bowl of water, and I shall have a mango for the queen.”

The wise men shook their heads, but what could they do? They led Sunan to the palace garden, and there they gave him a bowl of water. Sunan recited the spell, and just as the beggar had instructed him, he blew on the water.

A moment later, a mango tree in the garden began to bloom with fresh, ripe fruit. Sunan was careful to pour the water over the roots.

The wise men were amazed, the queen was overjoyed, and she and the king handsomely rewarded Sunan. Delighted, he no longer needed to wander, and so he settled in the city and was frequently a guest at the palace. Whenever the queen wanted a mango, she turned to Sunan, and always he was able to recite his spell and satisfy the queen’s desire.

One day the king said to Sunan, “Who taught you this spell?”

Sunan felt suddenly shy; he did not want to confess that he had learned from a poor beggar. It seemed beneath him. And so he said, “My teacher was a holy man who lives deep in the forest. He taught me many things.”

A few days later the king’s servants came to see Sunan. “The queen requests more mangos,” they said, and Sunan hurried to the palace.

As always, he walked to the garden, lifted his bowl of water, and recited the magical spell. The queen eagerly waited for the fruit to appear on the tree, but nothing happened.

“Why are there no mangos growing?” the king shouted at Sunan.

Sunan looked at the ground, ashamed to admit the truth to the king. Now he understood that he had not kept his promise to his teacher. He had neglected to honor and respect him, and he would pay for it.

“I lied to you,” he told the king. “It wasn’t a holy man who taught me the spell. It was only an old beggar, and he has taken my power from me because of my lie.”

“No one lies to me!” the king cried. He ordered Sunan to return all the gifts he and the queen had bestowed on him and commanded him to leave the city.

Once again Sunan was only a poor wanderer, but he had learned a lesson he would never forget. Now as he traveled, he looked for teachers in everyone and found wisdom in the most surprising people. After that day he remembered, always, to honor every teacher he met.