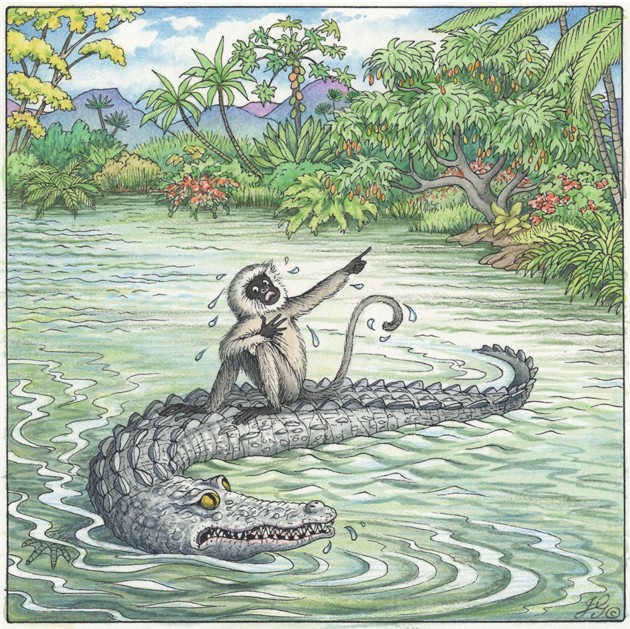 October 5, 2010
The Monkey and the Crocodile

Once upon a time, a family of monkeys lived upon a riverbank in India, and life was good. However, their river was full of crocodiles, and so the monkeys were always careful not to dip even a toe into the water.

The monkeys were aware of the crocodiles, of course, but what they didn’t know was that the crocodiles watched them, too — especially one mother. She thought a nice, fat monkey heart would make a fine meal. In fact, she began to crave monkey heart, and day and night, she plotted a way she might capture a monkey.

One day she said to her son, “You’re grown up now, and it’s time you did me a favor.”

“Anything, mother,” said the young crocodile. He was proud of how big and strong he had grown. “What do you want?”

“I wish to eat the heart of a monkey,” she told him. “Capture a monkey for me!”

The son was perplexed. “Mother, the monkeys do not swim in the water, and I cannot travel on land. How will I catch a monkey?”

The mother crocodile sighed. “Use your wits, why don’t you? Haven’t I raised you since you were just a little thing? I’m asking you for just one favor. There are monkeys everywhere around us. Surely you can catch one of them.”

The young crocodile began pondering this problem, and at long last he came up with a plan. All day long he lay silently watching one of the monkeys climbing up and down a mango tree, eating mangos one after another. “That monkey loves to eat ripe mangos,” the crocodile told his mother. “I know exactly how to trick him into the water.”

The young crocodile swam to shore and called to the monkey, “Hello there, have you seen the mango tree out on the island?”

The monkey came closer to the edge of the river and squinted at the crocodile. He had never before talked to one. His mother cautioned him not to. “I can’t reach the island,” the monkey said, “of course I haven’t seen the mango tree there.”

“Ah, that is a shame,” said the young crocodile, “for the ripest mangos grow on that island. They’re delicious. Perhaps I could show you one day.”

The monkey clambered up the tree and looked out at the island. He was certain he could see a fine mango tree. He scampered along a branch and looked down at the young crocodile. “How could you show me?” he asked.

“Ah, I could carry you to the island on my back, of course,” said the young crocodile.

The monkey looked out at that island, and he looked down at the young crocodile, and suddenly he forgot all the cautionary tales his mother and the others had told him. He thought only of mangos, of how sweet and delicious they tasted. He was a greedy fellow. And so, without a moment’s hesitation, he leaped from the tree onto the young crocodile’s back.

“Very well,” said the young crocodile, and he swam out into the middle of the river, far from shore, in the direction of the island.

“This is a fine ride,” the monkey said, delighted to be moving nearer to that island and that delicious looking fruit tree.

The young crocodile grinned. “I’m glad you like the ride,” he said. “Maybe you’ll like this,” and with those words, he dived underwater.

“No, please no, I cannot swim!” the monkey cried, but they plunged beneath the water, and monkey was afraid to let go. He was sure he would drown.

But the young crocodile rose back to the surface just in time. The monkey sputtered and choked and asked, “Why did you try to drown me?”

The crocodile laughed. “I plan to kill you and take your heart to my mother. She longs to eat a monkey’s heart.”

The monkey was a greedy fellow, but he was also quick thinking, and though he was terrified, he luckily had an idea. “Ah, I wish you had told me you wanted my heart,” he said. “If you had explained, I would have brought my heart with me.”

“What?” the young crocodile wailed in disbelief. “Where have you left your heart?”

“Why, it’s back there on shore,” the monkey said, “and if it’s my heart you want, we’ll have to travel back to the tree I was sitting in when we began to talk. That’s where I always keep my heart.”

“But why?” the crocodile pleaded.

“For safekeeping, of course,” said the monkey. Then, with another look at the island he said, “But can’t we first visit the island with the ripe mangos? We’re so close; it’s a shame to waste this long trip.”

“No!” the young crocodile shrieked. “We must return to the tree and fetch your heart,” and with that he began to swim with all his strength back to shore.

When they reached the river’s edge, the monkey leaped onto shore and scrambled as fast as he could to the top of the tree.

And from the highest branches of that tree, with the crocodile a safe distance away, he called, “If you want my monkey heart, you’ll have to climb this tree to get it!”

The young crocodile gnashed his teeth and wept, but those crocodile tears didn’t soften the monkey’s heart that, naturally, was safe inside his chest.