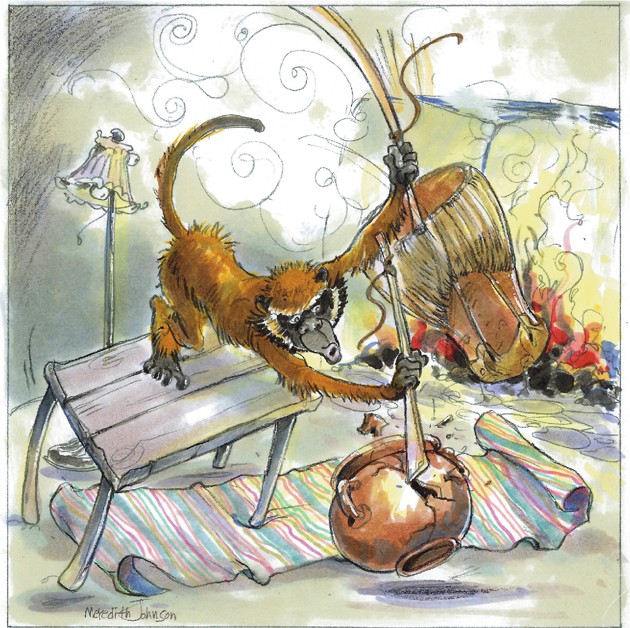 (A Tale from Uganda)

Once upon a time there was a little village in Uganda where twin brothers, Ochen and Opio, lived side by side. Ochen was a potter, Opio a drum maker. They both loved their work, and they loved each other too.

One day as he was walking home from the market, Ochen found some beautiful red clay. He collected it and carried it home and carefully worked at it until it was soft and fine. Then he carefully mixed it with water and shaped it into a cooking pot. He carved designs along the border and on the sides, and when he had finished, he studied it closely. Yes, this would be one of his most beautiful creations. He carried it outside to the courtyard and laid it in the sun to dry.

When the pot was dry, he placed it in his kiln and, making sure to measure the heat — not too hot, not too cool — he baked the pot. When it was finished, he carefully slid it out of the kiln. It was, indeed, one of his finest pots ever. He was very proud.

Meanwhile, Opio was working on a drum. He too had been walking home from the market when he came upon a fine log of oak. He carried it home, where he hollowed it out and shaped it and smoothed it with rough leaves. He purchased a beautiful hide from the farmer down the road, and this he trimmed and placed over the top and over the bottom of the log. He joined the two pieces with long strips of twisted hide, and when he was finished, he stood admiring his drum. It was, truly, the most beautiful he had ever made.

That evening the two brothers planned to meet for supper in Ochen’s house. Opio brought along his drum.

“What a beautiful drum!” Ochen said.

Opio spied the new cooking pot and cried, “That pot is exquisite. You are truly an artist, my brother.”

“Both of our creations are fit for a king,” Ochen said, and Opio agreed.

The cooking pot and the drum overheard the praise the brothers heaped upon them. They were terribly flattered. Indeed, as the men went on, they grew vain, as if they had anything to do with their beauty.

“Did you hear what they said?” the drum whispered to the pot. “They say I’m fit for a king.”

That set the two quarreling.

“I’m more beautiful than you,” the drum said, “and more useful too.”

“Useful? What use is a drum?” the pot said. “No one needs a drum, but everyone who wants to cook needs a pot!”

On and on they argued, and before long, the table, the lamp and the rug joined in. But no could agree which was more beautiful.

Meanwhile, Ochen and Opio did not realize the pot and the drum were arguing, of course; they didn’t understand their language.

As the argument between the pot and the drum went on, a friend of the brothers stopped by. He brought along his monkey. When the two walked inside, the monkey, who understood the pot and drum’s language, overheard their argument. Ochen and Opio and their friend decided to take a walk, but the monkey stayed behind. He pretended to be tired.

“Now what is this argument all about?” the monkey asked.

“We’re trying to decide who is more beautiful, the pot or the drum,” the table explained.

“I’ll be the judge,” said the monkey. “I’m a good judge. And will you abide by my judgment?”

“I will,” said the drum, twirling to show off his beautiful shape.

“Whatever you decide will be law,” the table, the lamp and the rug agreed.

The monkey nodded. “Very well, we must make a fire in the hearth and put the drum on the fire. Then I shall beat the cooking pot with drumsticks, and then we all will know which is most beautiful.”

The pot and the drum agreed to this plan, and the hearth joined in, hurrying to build a fire. When the fire was hot, the drum leaped onto the fire, and the monkey began to beat the pot with the drumsticks.

In a short time the drum shriveled to ash, and the pot broke into pieces.

The monkey began to dance with joy. “Only a fool would agree to such a foolish plan,” he said, and the hearth, the table, the rug and the lamp grew quiet. They did not wish to appear to be fools.

When Ochen and Opio returned to the house and saw their drum and pot were ruined, they grew furious with the monkey.

“This is his fault!” they said to their friend. They lifted the drumsticks to hit the monkey, but the monkey raced out the window and up into the hills, and no one ever saw him again.

The three men sat down by the fire and shook their heads. “What have we learned?” Ochen asked.

“There must be a moral,” Opio added.

“Surely there is,” their friend said.

And there they sat all night, trying to decide what they had learned.