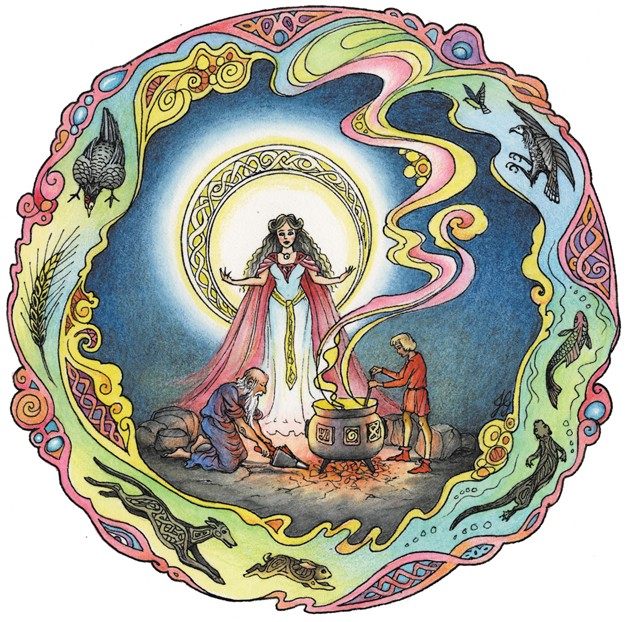 Long ago the moon goddess, Cerridwen, saw that her youngest child was hideously ugly, so she decided that to compensate, he must be the wisest child in the world. She would prepare a magical potion of inspiration. Drinking this would give him all the wisdom he would ever need.

The concoction was difficult to prepare. It required, first, the magical cauldron, and in that cauldron she would have to mix the perfect blend of herbs and totems. It would take one year to complete, for each item had to be placed in the cauldron at the proper moment. The brew had to be stirred constantly for the whole year.

Who could do such a tedious task, she wondered. She selected a servant, a young man named Gwion Bach. She carefully instructed him, making him promise to serve her faithfully. He was never to stop stirring, all year long. He would never leave the brew untended. An old blind man, Morda, was to keep the fires burning beneath the cauldron. Neither of them was to drink a single drop of the potion, or she would kill them both.

Gwion was a faithful and hardworking young man, and that whole year long, he stood by the cauldron, stirring until his arms ached, while Morda tended the fire.

When the potion was nearly prepared, Gwion accidentally spilled three drops of the liquid on his fingers and rammed his burning fingers into his mouth to cool them, thus swallowing all the inspiration inside that cauldron. He had never meant to take anything, but now he had unintentionally stolen the fruits of Cerridwen’s long year of preparation.

The powerful goddess was enraged. She let out a frenzied shriek and promised she would destroy Gwion.

The young man was terrified, but since he ingested the elixir the moon goddess had prepared, he knew how to change shape. He quickly transformed himself into a hare and raced as fast as he could into the forest.

But the goddess had this power too, so she turned herself into a hound, fleet of foot and wild with fury, and ran after the hare.

When Gwion — in the shape of the hare — saw the hound coming up behind him, he spied a river just ahead. He instantaneously transformed himself into a fish and leaped with all his might into the river.

When the goddess — in the shape of the hound — came to the edge of the river and saw the fish, she transformed herself into a sleek otter and dived into the river.

The otter was ready to pounce upon that fish and swallow him, when the fish transformed again, this time into a bird.

Out of the river the bird flew, up and up and up, into the bright summer sky. But when he looked down, he saw that the otter had changed into an eagle, and the eagle’s wide, powerful wings had lifted him out of the river. The eagle gave chase to the bird.

Poor Gwion saw that no animal could be safe from the wiles of the powerful goddess, and as he flew, he spied a field of hay bales in a field below. “I will be safe,” he whispered as he changed himself into a tiny grain of wheat and landed in one of the bales. Surely no one could find a single grain.

But Gwion had underestimated the goddess. The eagle swooped low and flew over the field, and when she realized what the boy had done, she turned into a large black hen.

Then, satisfied that she had ended the life of the servant, she turned once again into the goddess Cerridwen. However, before long Cerridwen discovered she was pregnant.

Nine months passed, and in those months the goddess understood that she would give birth to a boy who was Gwion, and in her anger, she vowed she would take revenge upon the boy when he was reborn.

But when she saw her baby, her heart swelled with love for the boy, and she could not bear the idea of destroying him. He was so beautiful, so sweet and gentle.

Still, she could not care for him as her own son, so she put him in a sack that she placed in the river. There a boy named Elffin found the child.

When he opened the sack and saw the boy’s shining forehead, he named him Taliesin, which means “radiant brow.” Taliesin is the boy who became the greatest poet in the world.

Now, when the fields are ripe with wheat, people remember the birth of Taliesin. And while those fields will be consumed, bare again by autumn, the people know that they will, like Taliesin, soon be reborn.