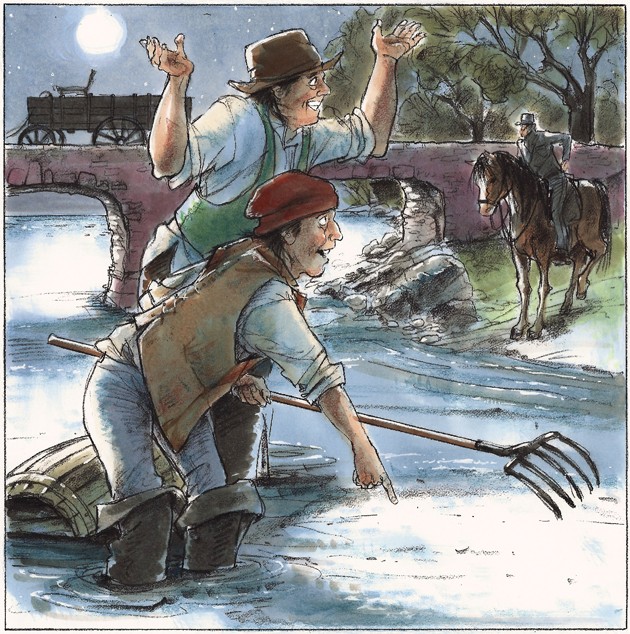 Once upon a time, long ago, there were two famous men from southern England, a land known for its wide valleys and medieval cathedrals, for ancient Stonehenge and the Avebury Stone Circles. These two were from Devizes in the heart of Wiltshire. Their names were Tom and Will, and everyone knew they made the finest brandy in the country. Besides being tasty, that brandy, people said, could cure any ailment at any time.

In the center of Devizes there was an inn called the Pelican, and the barman there bought his barrels from Tom and Will. For a long time, everyone was happy.

But then one spring day, Tom and Will’s brandy ran out. The two fellows thought about what to do, and they came up with a bright idea.

They bought a donkey and a donkey cart and traveled all the way to Bristol. Their plan was to smuggle some barrels of brandy out of Bristol and take the brandy back home.

Naturally, they hoped to avoid the police and the customs man, so they traveled by night. Luckily, as they were riding home, the night was clear and bright, and a fat, full moon lit up the sky and the path before them.

They were riding along when they happened across a bridge over a shallow pond, and as they were riding, the donkey panicked at the sight of the water.

That donkey kicked up its heels, and when it did, the cart tipped, and the barrels of brandy rolled out and over the side, into the water.

Before Will and Tom knew what was happening, the barrels disappeared.

Tom looked around and noticed two rakes in the cart. “We’ll rake them out,” he said, as he heaved out those rakes.

“That water’s cold,” Will said.

And with that, he tossed a pair of hip-high boots from the cart to Will. Tom took out another pair form the cart and they pulled their boots over their trousers.

They waded out in those boots and began to rake at the water, wrestling those barrels out of the water and muck.

Suddenly they heard the sound of horses’ hooves in the distance.

“And the police,” Tom said. And quick as that, these fellows came up with a plan.

A few minutes later, sure enough, a policeman on horseback arrived — he was out looking for smugglers.

“Evening, fellows,” he said, and he tipped his hat. “What’re you doing in the water? Sure must be cold.”

Will laughed and said, “Why it’s cold, sure it is, but surely it’s obvious what we’re doing, isn’t it?”

“Look out there!” Tom pointed to the spot where that big, full moon was reflected on the surface of the pond.

“Uh-huh,” the policeman muttered under his breath, “and what’s it to you?”

Surely, he thought, these two fellows were mad. The policeman, you see, believed something that was common wisdom in those days: that folks from Wiltshire were fools. And these two were clearly Wiltshire men.

“We’re raking the cheese out of the water,” Tom went on to explain.

“The cheese?” the policeman said, and he tried hard to keep from bursting out laughing at these fools.

“Why, yes,” Will said, “we’re raking the cheese out of the water, so we can take it home to feed our families. Anyone can see that’s what we’re doing.”

“Ahhh!” the policeman struggled to disguise his smile. “So I see. Well, good luck to you then!”

And he rode on, waving farewell, eager to tell the story of the foolish moonrakers to all his friends back at the station.

Meanwhile, they kept raking, and soon enough they had rescued those barrels and loaded them onto the cart. And when they returned to the Pelican, they told everyone the story about how they fooled the police.

To this day, people tease the Wiltshire folk about the moonrakers who raked for cheese.

But mention the story to a Wiltshire man, and he’ll wink at you, smile and ask, “So, who’s the fool?”