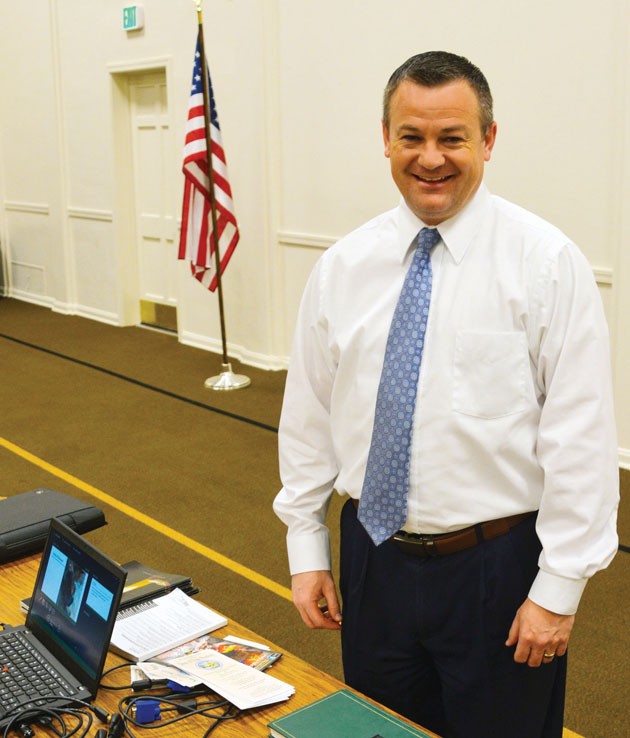 As he addressed the local gathering of the Utah Sons of Pioneers, Clint Uddy of the LDS Church Seminaries and Institutes Department brought additional meanings to the lessons of the past, and how they prepare us for our futures.

Paraphrasing Elder Melvin J. Ballard of the Quorum of the Twelve Apostles of the LDS church, Clint Uddy, Director of the Pioneers Trails Training Committee, helped members of the Tooele Chapter of the Sons of Utah Pioneers, understand on a deeper level how the extreme hardships suffered by the Handcart Pioneers, can help prepare us for our own future hardships.

Through stories, quotes and slides, Uddy helped us discover some of the additional symbolism and meaning behind these excruciating experiences.  Uddy also paraphrased Elder Neal A. Maxwell, who believes that for us today the hardships we endure, although of a very different measure, are as difficult as were those of the pioneers.

The idea of using handcarts to bring converts of the LDS Church to Utah, was hatched as President Brigham Young watched a miner pushing all his belonging in a wheel barrel to the California Gold Fields. In fact, of the 10 handcart companies, eight of them were highly successful in getting the Saints to Utah at less expense and arriving healthily. The two handcart companies of the Willie Handcart Company and the Martin Handcart Company were the exception to the rule, and suffered some real tragedies along the way. It is from their extreme experiences that some view the handcart experiment as a failure, while those who participated in these companies, tell of the joy they garnered because of these trying times.

Four feet and seven inches tall, 90 pounds and very elderly “Wee Grannie” was one of those who were told she could never survive the journey, but doggedly went anyway. Just before she died near Chimney Rock, Nebraska, she told everyone to let her son know she was buried facing Zion. Hearing this emotional experience, many in the audience mentioned how we today should live and spend our lives facing and finding Zion.

Tom Tennent from England had financed $25,000 to help others in his company gather with him in Zion. Unfortunately in the 104-degree late September heat wave, he died, but was lovingly transported many extra days to Fort Laramie where he could be buried in regular cemetery.

The unseasonal extreme heat lasted well into October. Facing that kind of heat, and almost void of foodstuffs, it was decided on Oct. 17 to burn blankets, bedding, clothing and anything else deemed not absolutely necessary in order for them to be able to travel much quicker to safety. Two days later, an early winter blizzard hit this same company now void of those burned necessities. The temperatures dropped almost overnight to below zero, and 18 inches of snow was deposited. Besides death, starvation and freezing, company members tell stories of waking up with their hair frozen tightly to the ground or tent walls requiring a sharp pocket knife and then a rousing fire to dry what was left of their golden locks. One SUP audience member told the story of an ancestor who refused to burn her cow bell like necklace. She instead turned it around to dangle down her back where it couldn’t be seen. At her own death years later, the scarring from the chaffing necklace was still very visible on her neck and back.

One last story that bears a lot of symbolism to the sacrifice and atonement of Jesus Christ is about 11-year-old James Kirkwood who was given the responsibility to make sure his four-year-old brother got safely into the camp that lay 15 miles away, over the highest elevation on the trail in 18 inches of snow and below-freezing temperatures. James ended up carrying his younger brother most of the way, and after laying his sibling safely in his mother’s arms, lay down himself and died, while his mother and two other brothers lived. Many in the audience understood very deeply another older brother named Jesus Christ who performed this same feat, not for just one little brother but for billions of little brothers and sisters, and then died after giving his all.

It was all together a wonderfully spiritual presentation and we thank Brother Uddy for taking the time and making the drive to instruct us so beneficially.

On Thursday, April 6 at the LDS Chapel at 196 N. Pinehurst, Ned Bevan will address the Sons of Utah Pioneers about Tooele’s weather conditions over the years, that has been measured and recorded by the Bevan family for generations. Pot luck dinner starts at 6:30 p.m. with Bevan’s presentation to follow.