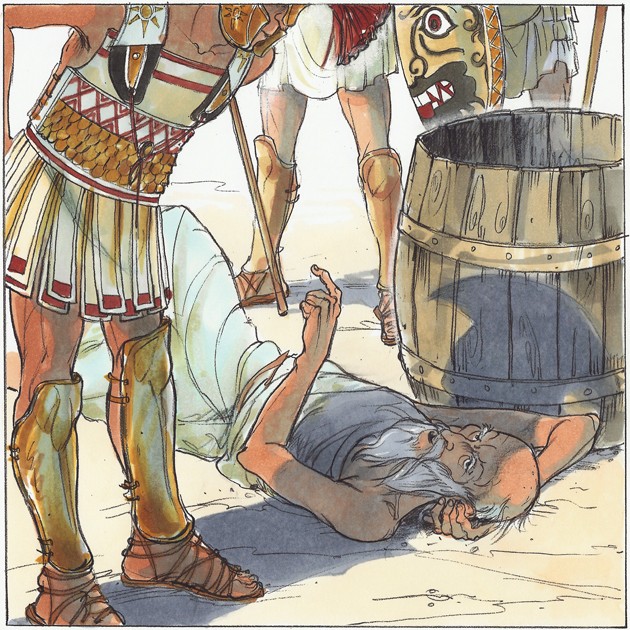 (a tale of ancient Greece)

Once upon a time there lived a man named Diogenes who was as wise as any man who ever lived. People admired Diogenes for his intelligence, but he was a rebel who lived his whole life in opposition to others. In winter he walked barefoot in the snow. In summer he rolled in hot sand. When people asked him why he did such things, he explained that he was hardening himself against discomfort.

One day Diogenes was walking across the agora, the ancient gathering place, heading toward the Acropolis. But he walked backward, and as men ambled past him, they laughed and whispered and wondered why he would do such a thing.

Diogenes pretended not to notice the whispers until a large crowd had gathered around him. Then he turned and said, “You laugh at me because I am walking backward? But you lead your entire lives backward and cannot change your ways so easily as I.”

With that, he turned on his heels and began to walk in a normal fashion.

Another day, Diogenes walked past a stream, where he noticed a young boy scooping out water and drinking from his hands. He stopped to admire the child and sighed to know the child had outdone him in simplicity. He tossed away his cup and he never used it again, for Diogenes believed that no one ought to have more things than he truly needed. He believed no one needed much.

In fact, instead of living in a house, Diogenes slept in a tub made from a barrel. He also rolled from place to place in that barrel. His greatest fear was that he would awaken one day to discover he lived in a palace while all those around him lived in barrels.

Diogenes spent most days lying in that tub, with his face in the sun, waiting for anyone who wished to stop by and ask him a question. People came from far and wide seeking his wisdom.

But one day, after he had been dispensing wisdom for a while, he climbed out of the tub and began to walk through the streets. It was a bright, sunny day, but Diogenes carried a lighted lantern and peered around as if he were searching for something.

As people passed, they wondered what he could have lost, but most were wary of asking. At last, a young man who did not know of the great man’s reputation innocently asked, “Sir, why would you carry a lantern in this bright light?”

Diogenes looked at the young man and said, “I’m searching.”

“An honest man,” Diogenes answered. “Alas, I don’t see a single one in sight.”

Word of Diogenes’ wisdom spread to the king, Alexander the Great, who had been tutored by Aristotle when he was very young. When Alexander succeeded his father, Philip II of Macedon, to the throne, he was a learned man. By the time he was 30, Alexander had created one of the largest empires in the world, stretching from the Ionian Sea to the Himalayas. He was known throughout the world as one of the great military leaders. But he believed Diogenes might have something to teach him, and so he decided he would travel to Corinth to see the philosopher.

Since Diogenes would not travel to see the king, the king decided he must go to see the wise man, and his men told him he would likely find the man in his barrel tub.

“He’s a most peculiar man,” they warned him.

Alexander did not care. He was looking for wisdom, and he understood that wisdom sometimes comes in strange packages.

It happened that day that Diogenes was beside his tub, lying in a pool of sunshine on the grass, enjoying the warmth and light after a long winter. When he heard the sound of the crowds moving toward him and the blare of trumpets announcing the arrival of the king, he looked up.

He squinted at the sight of the procession coming toward him.

When Alexander spotted the great philosopher, he leaped from his horse and ran forward, so excited was he to hear Diogenes’ words.

He quickly reached the man and smiled down and said, “Diogenes, I have heard many stories of your wisdom and I’ve come to ask if there is anything I can do for you. Please, feel free to ask me for anything.”

Diogenes looked up, thought for one moment, and said, “Yes, yes there is.”

“Anything,” the king answered, pleased to do what he could.

“Stand a little to the side, please,” Diogenes requested. “You’re blocking my sun.”

When they heard these bold words, Alexander’s guards gasped, but the king was so surprised by the answer that he could only laugh. After that, he admired Diogenes even more. He stepped aside, and Diogenes thanked him, sincerely.

“It is a wise man who keeps his word,” Diogenes said, and as Alexander and his men turned to ride home, the king smiled.

He turned to his servant and said, “I can tell you this, if I were not Alexander, I would like to be Diogenes.”