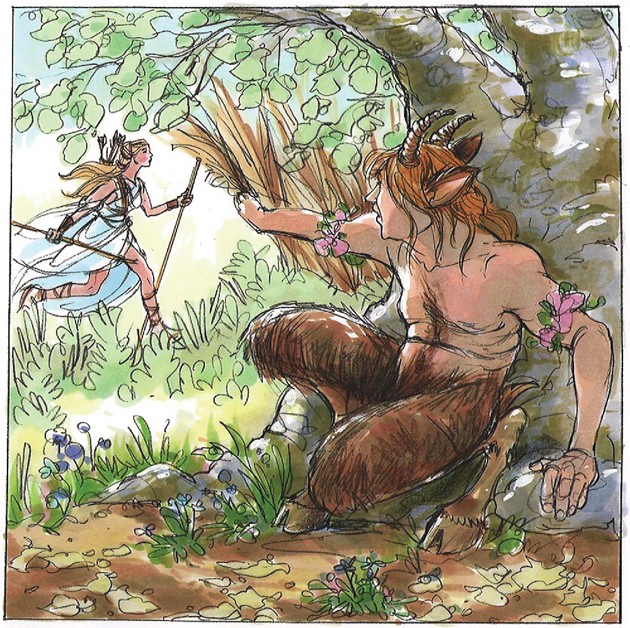 If you are one of those people who walk in the woods and feel lonely, it would be wise to remember the woods are not a lonely place. Pan, the god of the outdoor world and caretaker of flocks and herds, understood that the woods were not only alive, they were lively and merry.

Pan understood this well, for he lived in the fields, groves, woods and waters of Arcadia.

Pan was merry, but he was also a strange-looking fellow. He had pointed furry ears and horns that sprouted above his bushy brows. He had the legs and hooves of a goat. Indeed, Pan looked so much like the fauns and satyrs of the woods that they adored him and considered him one of their own. He was, in many ways, like all the wild creatures of the woods. Like them, he slept in the sun and lived on wild grapes, leaves and nuts. Pan always shared his bounty with others.

Pan was never lonely — not for one moment. After all, besides all those wild creatures of the woods, there were flowers and trees and rivers and streams. They, too, speak, for so many had been transformed from other beings.

For instance, there was Dryope, the lotus tree, who once upon a time was a happy young woman walking in the woods with her baby and her sister, Iole. One day, Dryope carelessly broke off a piece of a lotus tree, where a nymph had been hiding. She saw blood dripping from the wounded plant, and she knew she had done harm. Before she could do a thing, her feet took root, and Dryope had to say goodbye to her baby. Iole promised she would bring the child to visit and play in the shadow of her leaves.

And there was Echo, who once was a wood nymph. She constantly chattered to Hera, trying to distract her so the goddess wouldn’t notice the mischief her husband, Zeus, was up to. Enraged, Hera altered the nymph so that instead of being able to speak, she had to wait until another spoke, and she could say nothing but their final word.

When poor Echo fell in love with handsome Narcissus, she stood before him trying to speak. She kept uttering the last word he said, and Narcissus thought she was mocking him. Naturally, he ran away. From that day on, Echo faded to nothing but a voice.

Pan was her friend, too, and he also befriended poor Narcissus, who fell so in love with his reflection that he also was transformed — into a flower. That is the flower that leans over its own image in the water.

There was Clytie, the maiden who fell in love with the sun god Apollo and stared at him all day long, as he traveled across the heavens in his blazing chariot. She was turned into the sunflower, rooted in the Earth and forever turning her head to watch the sun.

And there were so many others in the woods — Daphne, the laurel; Hyacinthus, the boy who died and returned to live as the hyacinth flower; and there were the Oracles, those voices in the caves who answered prayers.

So Pan was never, ever lonely.

But one day he was walking through the woods of Arcadia when he spied a beautiful wood nymph, Syrinx. She was famous for her passion for hunting, and that day she was chasing the goddess Diana, hurrying to the hunt. When Pan spotted her, he thought she was the most beautiful wood nymph he had ever seen, and he began to chase after her.

Syrinx had no interest in love. Besides, Pan was so peculiar looking. She raced away as fast as she could, and Pan chased after her.

Syrinx was certain that she would get away until she reached the edge of a river. She could not run across, and desperate, she called to the river god, “Please, rescue me from Pan’s pursuit.”

As Pan rounded a bend, he saw her before him, stopped by the river. He ran faster still, but just as he was about to reach out and bring her into his arms, the river god turned Syrinx into a reed.

When Pan opened his eyes, he saw that he held only a tuft of reeds. He sighed so deeply that the sigh traveled through those hollow reeds, producing what sounded like a song.

The song was beautiful, and Pan’s heart began to flutter. That song reminded him of love. He gathered up the reeds and created the first panpipe. He called it Syrinx, in honor of his beloved. From that day on, wherever he went, he took along Syrinx, and he played beautiful song for all who would listen.

Now, when you walk in the woods, listen closely and you will hear all the voices of the gods and nymphs and creatures transformed and the sweet sound of Pan’s pipes.