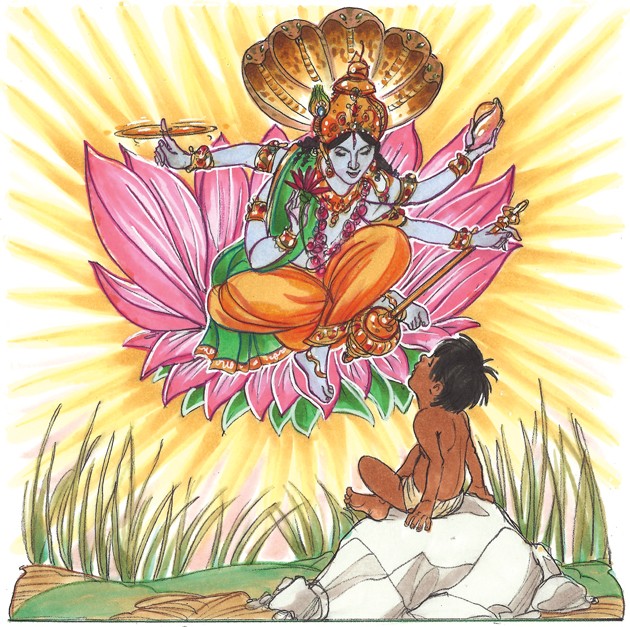 October 8, 2013
The Pole Star and the Seven Rishis

Long ago, King Uttanapada had two queens. His first wife was Sunita, who was kind and gentle and who gave birth to a boy she named Dhruva. The king’s other wife was Suruchi. She was young and beautiful and her son was Uttama.

By rights, Dhruva would be the one to take his father’s place as king when he was grown. But Suruchi was determined to make her own son king, and so she and Uttama worked to make Uttama the favorite son.

One day, when Dhruva was 5 years old, the two princes were playing together when King Uttanapada entered the room. The boys raced toward him, but before they reached his side, Uttama began to taunt Dhruva and said, “Can’t you see the way he loves me better? You weren’t born to the proper queen.”

Uttama’s taunts went on: “If you wish to be loved, you will have to go to see the great god Vishnu, preserver of the world, to ask for a blessing.”

Dhruva was terribly upset, but afterward his mother tried to console him. “Come, my child,” she said. “Perhaps your half-brother is right. Let us send you to seek a blessing from the Lord.”

There seemed nothing else to do, and so Dhruva set off on a long journey into the forest. He was determined to win his rightful place in his father’s affections.

As he walked, the divine sage known as Narada noticed the boy’s firm determination. Narada, wise and mischievous, decided he must help the boy. And so he appeared before Dhruva. “Do not be so hard on yourself,” Narada said. “You are only a tender young boy. You must not make this long journey all alone.”

But Dhruva was determined. He would not return home without seeking Vishnu’s blessing. And when Narada understood this, he decided he would take the child under his guidance.

“I will teach you the rituals and mantras you will need to know if you are to survive such a quest,” he said.

Dhruva’s lessons began, and they were difficult, but nothing seemed to alter his determination. He memorized and even gave up food and water for months, with his mind fixed upon seeing the Lord. His concentration was so fierce and so focused, his meditations shook the very Earth. Nearby, the Seven Rishis, or sages — also known as the Saptarishis — were meditating, and they could not imagine a person who could possess so much power in meditation. When they discovered it was only a boy, they surrounded him and prayed for him.

After a while, Indra, king of the gods, began to worry that the boy may wish to have his throne in the heavens. He decided he must try to distract Dhruva from his meditation, and so he took the form of the boy’s mother and appeared before him.

“Please, son, come home. I miss you too terribly,” said Indra in disguise. But Dhruva’s concentration was so great, he did not even hear.

And so Indra decided he must try another distraction, and he sent snakes and monsters and spiders to the spot in the forest where Dhruva sat. But the boy remained still and calm, thinking only of his Lord.

At long last, after many months of this, Vishnu himself felt the strength of the boy’s meditation, and he knew he must grant him any wish.

Vishnu came down to the forest, stood before Dhruva and said, “I, Lord Vishnu, am here. I have heard your desires. What do you want?”

But Dhruva only smiled. He did not move. By this time, he had overcome all his desires, except to be heard by the Lord. He had forgotten even the objective that had sent him into the forest, and now he wished only to live a life in memory of Lord Vishnu.

Vishnu granted his wish, and he decided the boy would attain Dhruvapada — that is, he would become a celestial body, untouched by the world.

Dhruva returned to his kingdom, where his family welcomed him, and when he was 6, he attained the crown. For the next decades, he ruled, and he was a fair and just king. After this, Vishnu placed him in the sky, high above the world, far from jealousy and evil and competition.

As for the Saptarishis, or seven rishis, who had protected him on Earth, Vishnu turned them into stars as well. These he placed around the star called Dhruva.

All these centuries later, if you look at up the sky, you can see the star known as Dhruva Tara — Dhruva Star — though some call this unmoving body the pole star. And you can see the seven stars moving slowly around it in the constellation known as Saptarishi, or the Great Bear.