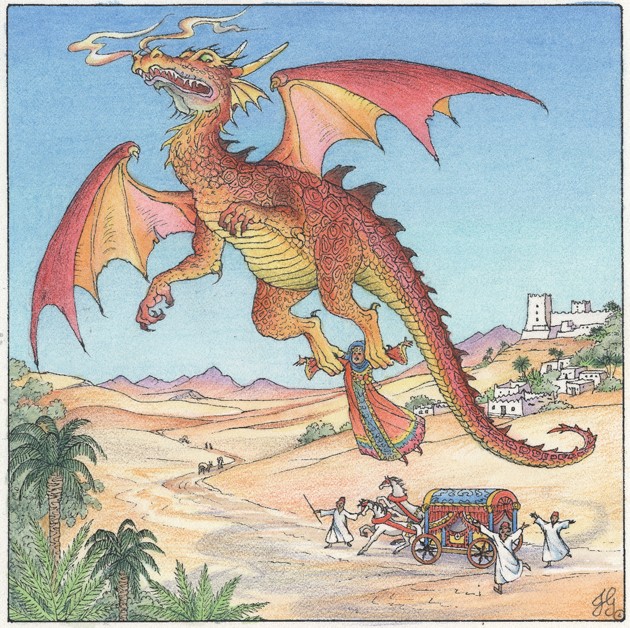 Long ago in Morocco there lived a princess who was driving in her carriage from the palace into the city when suddenly the sky opened, and a dragon swooped down out of the heavens and picked her up.

It was the work of the Jinns, evil spirits who had sent the dragon to capture the princess. They put her under a spell and hid her away.

When word spread of the capture, many princes attempted to rescue the princess, but no one returned to the king with good news. Rather, each prince came and said, “Alas, I could not find her.”

One day a poor orphan who was all alone in the world decided to go to the city to find work. Abbas was the young man’s name, and he began the wearisome trek from the countryside.

After he had walked all day, he came upon a tall, crumbling structure. It began to rain lightly outside, so Abbas decided to stop at this place.

He knocked on what was left of the door.

When no one answered, Abbas cautiously walked inside, calling into the darkness, “Is anyone home?”

Suddenly, out of the dark shadows, a hand carrying a lighted candle floated toward Abbas. A finger beckoned to him.

Abbas was a fearless young man, so he walked toward the hand. Soon he discovered he was walking down a dark flight of stairs.

At the bottom of the stairwell, Abbas saw an alluring palace. He followed the hand into an extravagant room rich with tapestries and tile. In the room was a table laden with food.

Abbas was starving, and without stopping to think, he began to eat until he was full. Then he turned and saw the hand beside him. Once again the finger beckoned.

Again he followed, this time down a hallway into another room. In this room was a big bed, and on the coverlet laid a silk dressing gown.

Abbas dressed in the gown and climbed into the bed. He slept deeply through that night, until the hand tapped him on the shoulder at dawn.

Abbas woke feeling rested and strong, and from somewhere in the distance he heard a voice. “You are a brave man,” said the voice. “You are the first who dared follow me. Promise to wait patiently for the next three nights without running away or calling for help, and you will break the spell of the Jinns.”

Naturally Abbas agreed to wait. “I promise to break the spell,” he said, though he had no idea what that spell was.

That night he feasted again, and again he slept in the big, warm bed.

At midnight he heard a creaking sound and the doors to the room opened. In marched an army of men carrying clubs. They began to beat Abbas most viciously. Still, true to his word, he did not run or cry out. At dawn the army departed and the hand reappeared.

This time the hand carried salves and balms and liquid medicines and it treated his wounds and bruises. Within minutes he was cured.

The second night the same thing happened. Again Abbas did not run away or cry out. Once again at dawn the hand healed him.

On the third night, the army beat Abbas even more cruelly, but he did not complain or run away, and all night he whispered his mantra, “I will break the spell of the Jinns.”

In the morning of the fourth day, Abbas waited, but this time the hand did not appear at dawn. He waited another hour, and then another, and at last a beautiful woman appeared. It was she who treated his wounds with magical ointments. Once again he was instantly healed.

Abbas could not take his eyes from this young woman’s face she was so exquisite. “Who are you?” he asked.

The young woman told Abbas the story of the day the dragons stole her away and the Jinns’ enchantment. “I am a princess,” she said, and the moment she finished her tale, she disappeared.

Once again Abbas was in his own tattered clothes, standing above the ruins of the palace. But this time he wanted to find the princess. Alas, he had no money, no horses, no friends to help. Still, he vowed he would travel the world until he found her. And he set off on his quest.

Meanwhile, the princess’s spell had been broken and the dragon carried her back to the palace. There, the princess waited and waited. She remembered the young man who vowed to love her, but at last she gave up hope that Abbas would return.

On their wedding day, as the princess was riding in her coach, she noticed a young man standing at the gates of the palace — a young man dressed in rags.

At once she recognized his face. It was Abbas, and she understood that he had tried to reach her. In his eyes she saw tears, and she knew he was sad because he loved her.

“Stop at once!” she called to the coachman, and she turned to the prince. “Some time ago I lost the key to my box of jewels, and I had a new one made,” she said. “Then I found the old one. Which key should I use?”

“The old one, of course,” the prince said. “The original is always best.”

“I agree,” said the princess. And with those words she stepped out of the coach and ran to Abbas. She took his hand in hers and led him back to the coach.

“When I spoke of an old key,” she said to the prince, “this is what I meant. When no prince was brave enough to rescue me, this man did, and he won my heart.”

And so the princess married the pauper, and they lived happily ever after.