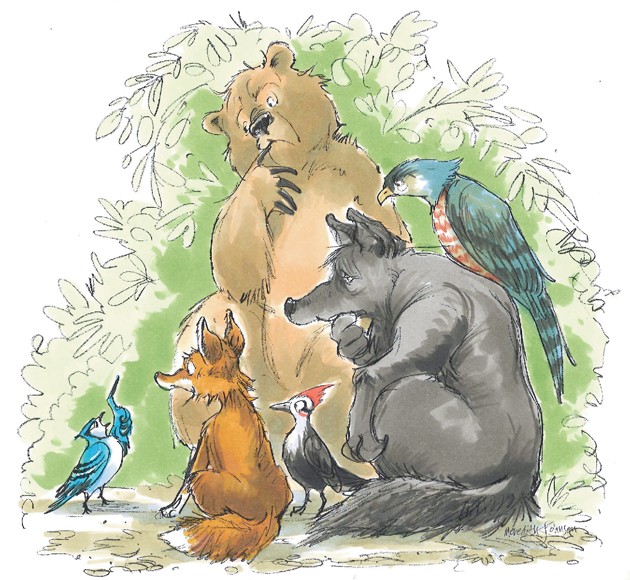 Once upon a time long ago, before human beings inhabited the Earth, the animals held a council every year. One year the conversation was all about Turtle’s decision to move to the sky. Turtle had asked Thunder God to take him there, and there he stayed, living in the thick clouds. When the Harvest Moon rose, Turtle appeared in a cloud, and he told stories of his life in the sky.

The other animals envied him, for a rumor had begun to circulate that a new race of creatures was coming to take over the land. The animals talked it over and decided they all must join Turtle in the sky if they wished to stay safe. The trouble was, Turtle hadn’t told them how he got there.

“I’ll find out,” Deer said, and so he began to wander about until one day he discovered Rainbow arching high into the sky.

“Can you carry me to the sky?” Deer asked. “I wish to visit my friend Turtle.”

But Rainbow knew he had to get permission, and so he said, “I will ask Thunder God. Come see me again in a little while and I will take you there.”

Winter came, and Deer decided to visit Rainbow again, but no matter how far and wide he searched, he could not find him. Life on Earth was becoming more difficult, and the animals were growing more and more afraid. Deer was desperate, and so he searched and searched.

Finally summer came again, and Rainbow reappeared. “There you are!” Deer cried. “I searched for you all winter long. Take me to the sky now to see Turtle.”

“I cannot take you now,” Rainbow said, “but come find me on a day when the fog blankets the lake. This time I promise I will be there.”

A few days later a thick fog rolled in over the lake, and Deer hurried to find Rainbow. He finally found him, his arch made of many colors stretching from the lake into the faraway hills where there was no fog.

Deer quickly stepped onto Rainbow’s path and walked into the sky, and there his old friend Turtle greeted him.

“It’s a wonderful life up here,” Turtle said, and so Deer decided to stay.

That year when midsummer passed and the Harvest Moon rose, the animals met again, but this time Deer was not there. They sent Woodpecker and Blue Jay and Hawk to find him, but no one had seen him. Wolf searched. So did Fox. But they found no sign of Deer.

As they were growing frantic, the great cloud where Turtle lived rolled across the sky, and Turtle called down to his friends. “Deer is in the sky. Rainbow made him a path, and he came to live here.” He pointed to a golden cloud, Deer’s cloud.

“All of you should follow Rainbow’s path and come to live in the sky,” Turtle said, but the animals were busy complaining. They were angry that Deer had left them without warning.

Angriest of all was Bear. “Deer is a traitor,” he said. “He is a coward who is afraid of strangers, but I’m not afraid. He should be punished for betraying us. I will follow Rainbow’s path until I find him.”

And with that, Bear went in search of Rainbow, and when he found the path, he walked and walked until he reached Deer in the sky.

“Why did you leave us without warning?” Bear growled at his old friend.

“I was drawn to the sky,” Deer said softly.

This only made Bear angrier. “You should have waited for our council! You have betrayed your comrades.”

Deer grew angry. “How dare you accuse me of betrayal!” His eyes flashed, and he arched his back and lowered his antlered head and rushed at Bear. Bear growled and reached with his claws.

Bear and Deer battled on, and the heavens shook. Down below, the animals looked up with worry. They loved Bear and Deer. No one wanted anyone to fight, and so they decided to send Wolf to the sky to stop them.

Wolf climbed Rainbow’s path and reached Deer and Bear. He found them bleeding, and he cried, “Stop! Friends, the battle is over.”

The sound of Wolf’s voice stopped the fight. They looked at Wolf. They looked at each other. Then they turned and walked away. Ever since that day, Bear and Deer have not been friends.

After the fight ended, Wolf summoned the other animals, and they too climbed Rainbow’s path. There they gathered to talk about what they must do, and they all agreed to stay in the sky. They would send their descendants to Earth to live with the new race of creatures.

Sometimes these days if you look up at the sky, you can see the old animals; they are in the clouds, and sometimes you may recognize their shapes in those clouds. And every autumn, near the time of the Harvest Moon, you will see the leaves on Earth turn the color of Deer’s and Bear’s blood.