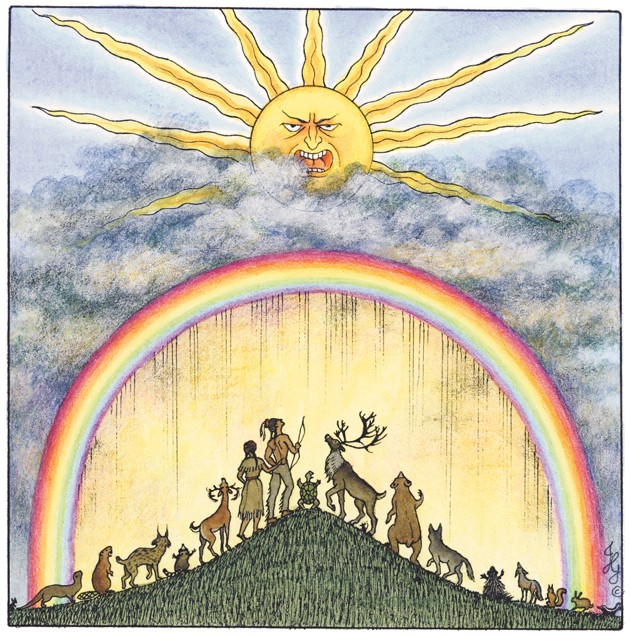 Long ago sky was a land of its own — vast and beautiful, bountiful and blue. Sun and Moon were husband and wife in those days. They lived in Sky Land, but they were curious about the lands below, and so one day they decided they must visit.

They traveled through a hole in the sky.

When they were down below, they began to explore. They traveled east and west, looking at everything and everyone, shining their light upon all the creatures of Earth, and those creatures — animals and humans alike — rejoiced in the light of the Moon and the warmth of the Sun.

When Sun and Moon were gone, the Earth creatures wondered about Sky Land.

“It must be even more beautiful than our land,” they said to each other. “What sights there must be!”

Naturally rumors spread. Some said Sky Land must be warm and welcoming; others were certain it must be cold and cruel, no place for the creatures of Earth. There was just one thing everyone agreed upon, and it was this: Sky Land prompted everyone’s longing and wonder, everyone’s curiosity and everyone’s desire to know more of this mysterious place. They longed to see it for themselves, but alas, they could find no way to reach Sky Land.

Meanwhile, in Sky Land, Thunder God noticed that Moon was growing thin. “What is happening to you?” Thunder God asked her. “You do not look as round and full and bright?”

Moon glowed silently, but she said nothing in response to his question.

Thunder God saw Moon was growing thinner still — thinner and smaller each day. Once again he asked her what was wrong. Once more, Moon only silently glowed.

And so Thunder God began to monitor Moon’s appearance. Night after night, he studied her, and he saw that every night she was thinner, smaller and paler. Before long he feared she might disappear altogether.

And that night came.

Thunder God searched Sky Land, and when he could not find Moon anywhere, he blamed Sun. “It is your fault!” he roared. Sky Land trembled, and down below the Earth people looked up at the sound.

Clearly something was wrong.

That’s when they noticed Moon was gone.

They wept to think they might never see her again. They longed to know what was happening in Sky Land, what had happened to the friend they’d grown accustomed to seeing.

“We ought to go there,” Bear said, and Otter agreed. So did many of the young maidens, and the hunters nodded. “We need to find her,” they said.

In Sky Land, Thunder God roared at Sun, certain it was he who had harmed Moon. “You will pay for this!” he cried, and he cast a black cloud across Sun’s brilliant face. Down below, the Earth creatures shuddered in darkness.

Soon heavy rain began to fall from that cloud, drenching the people of Earth.

In Sky Land, Sun was angry too. “How dare you accuse me of mistreating the one I love,” he seethed, and his anger was so hot, it soon began to melt that cloud, and before long that cloud transformed into a rainbow, and that rainbow arced across the world.

“That must be a path!” the creatures of Earth rejoiced. No longer did they care about the thundering sounds in the sky or the pouring rain. They saw promise in that path, and so they called on their king, Old Turtle, to seek his wisdom.

But Old Turtle shook his head. “It could be dangerous,” he said, studying the rainbow. He had never seen such a thing, and though it was beautiful, he did not know where it might lead. “We must be cautious,” he said.

But some were too excited to listen. “Let a few of us try,” they cried, and before Old Turtle could say another word, they had leaped upon the rainbow and began climbing toward Sky Land.

Above, Thunder God was growing weary of the battle. He closed his eyes, and the rain fell more softly. Sun’s power returned, and he shone with all his might, and as he did, that rainbow path vanished.

The creatures on that rainbow were left suspended in the sky, with no way back to Earth, and the people say it was the gods who outlined the animals’ bodies in stars.

They say the creatures that climbed that first rainbow path turned into our constellations, waiting forever between Sky Land and Earth, vigilantly watching over Moon.