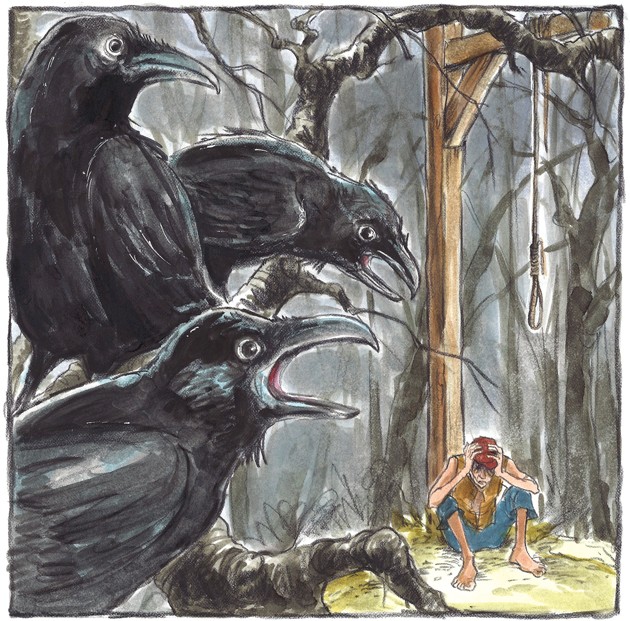 Once upon a time, friends Donal and Patrick decided to go out into the world to see what they could see. They had known each other since they were just lads, but Patrick had grown selfish as he grew older. He was the stronger of the two, and it was he who carried the great pack filled with food.

Each evening the two sat down to share a meal, but Patrick gave Donal a little less at every serving until Donal complained one night: “Patrick, I’m starving, don’t you see?”

After that, he charged Donal a few more coins at each meal until Donal had not a single one left.

“I’ll take your shoes,” Patrick said. So Donal gave over his shoes, and the next day Patrick asked for his shirt. Before long Donal had nothing but his trousers and jacket and raggedy hat.

“I can’t give away the last of my clothes,” Donal said, “but I’m starving. Please give me some food.”

“You’ll pay with your sight!” Patrick said, and because he was so weak and desperate, Donal could do nothing but allow the man who once upon a time had been his friend to take away his sight.

Now Donal was blind, and to make matters worse, Patrick simply laughed and said, “I’m leaving you now beneath this tree — and the gallows! What do you think about that?”

Donal considered this, for he could feel death creeping upon him. He wept with all his heart.

“How could I have been such a fool to trust that man?” he asked the wind.

A moment later, to his astonishment, he heard a rustling of feathers overhead, and the ravens perched there began to talk.

Donal had never before understood the language of birds, but by some kind of magic, he suddenly could understand. He listened closely as the ravens spoke of the princess in the nearby kingdom, and of her blind father.

“The princess is distraught and her father can do nothing to cure her misery,” the first raven cawed.

“If only he knew of the dew,” said the second raven.

“Only we know the secret of the summer solstice dew,” said the third.

Donal stayed quiet, listening hard, hoping the ravens would explain this dew. Sure enough, as he sat there, the ravens went on talking and talking. Soon Donal understood that tomorrow, on the morning of the summer solstice, the dew that fell would cure anyone of blindness.

He fell asleep happy with this new knowledge, and in the morning he woke and touched his hands to the grass. He rubbed that dew into his eyes, and sure enough, his sight was restored.

Donal reached into his sack and pulled out an empty bottle. He was glad he had not given this away. He filled that bottle with the dew. Although he was so weak that he was near fainting, he dragged himself to town to find the blind king.

When at last he reached the palace, he knocked and explained to the guards that he could cure the king’s blindness. Naturally, they laughed at him, but they did not say no, and so it was that Donal came before the king.

“Sir,” he said, “rub this water into your eyes and you will be cured. This is an ancient remedy I learned from those who know magic.”

The servants worried for their king, but the king was so eager for a cure he reached out, dipped his fingers into the water and rubbed his eyes.

Sure enough, his sight was restored!

“You are a hero,” the king said to Donal. He called for his daughter, the princess, to come to the chambers. He wished to show this miracle to her.

When the princess understood Donal had cured her father, she bowed to him and said, “We will give you anything you wish.”

Donal looked at her and his heart filled with love. Shyly he said, “I’d like to marry you.”

Of course, the princess agreed, for he was a handsome lad and clearly kind, and he had cured her beloved father.

And by the next month, Donal had become the king’s most trusted adviser and his son-in-law, too.

One day, Patrick, who had been traveling, appeared in this very same kingdom. When he learned that his old friend Donal not only had regained his sight but had become a rich and famous man, he hurried to the palace to beg his forgiveness.

“I don’t know what came over me,” Patrick said to his old friend. “I hope you can forgive me, and tell me, please, how did you cure your blindness and the king’s blindness too?”

Donal was a forgiving man, and so he forgave Patrick and told him the story of the ravens at the gallows. He whispered the secret.

“Tonight’s the night,” Donal said. “It is a secret, but on midsummer’s eve, if you lie under the gallows you will understand the language of the birds. But please, don’t tell anyone the secret of the summer solstice dew. It’s a powerful secret and must be kept with care.”

“Of course,” Patrick agreed, but the moment he left the palace, he hurried to the tree with the gallows, carrying along dozens of bottles to fill with morning dew.

But what poor Patrick did not know was that those ravens had heard that someone had cured the king of his blindness.

“Someone has eavesdropped upon us,” they whispered to each other, “for otherwise, how would anyone know the secret of the dew?”

Patrick arrived at the tree, his heart pounding with excitement.

The ravens looked down and said, “That must be him.”

They flew at Patrick and attacked him with their beaks and their claws.

“This will teach you to eavesdrop!” they cawed as they beat upon him.

Soon Patrick died, while Donal lived happily ever after.