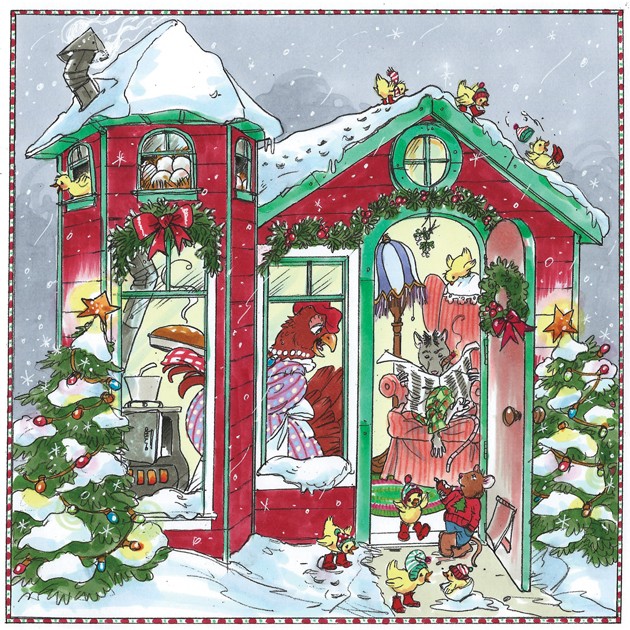 Once upon a time a little red hen lived in a cabin with a mouse and a rat. One snowy Christmas morning she woke up and decided it would be nice to have a cake.

“It’s such a festive day!” she said to the rat. “Don’t you think a cake would be a lovely treat today?”

“Nothing better than sweets on Christmas!” the rat agreed.

So the hen gathered ingredients, and said to the mouse, “Would you like to grind the wheat?”

“Neither would I,” the rat agreed.

So the little red hen ground the wheat.

So the little red hen cracked the eggs.

“Who’ll stir in the sugar and the nuts and the fruit?” asked the little red hen.

“And certainly not I,” the rat added.

So the little red hen poured the ingredients into the bowl, and then she stirred and stirred, and when the batter was done, she asked, “Who’ll pour it into the pan?”

“I suppose that means I’ll pour,” said the little red hen. “But tell me this. Who’ll eat this cake?”

“Is that so?” said the little red hen.

As that cake baked and the cabin filled with the sweetest scent, the mouse’s mouth began to water, and the rat’s eyes grew round with desire, and soon that cake was baked.

“Now I’ll pull this cake out of the oven and eat it!” said the little red hen, but as she did, the cake suddenly spun in a circle and rolled to the floor and out the door and down the hill. The hill was so icy that the cake rolled with ease, and the little red hen and the mouse and the rat chased for it, slipping and sliding along.

As the cake was rolling by the barn, the barn owls cried, “Where are you running, Christmas cake?”

“I’m running away,” the cake answered.

“From whooo?” asked the owls.

“From the little red hen and the mouse and the rat,” the cake said, sliding faster still. But the owls liked the look of that cake, so they flew out of the barn and began to chase it too.

Faster and faster and faster that cake rolled, and soon it came to a ditch full of diggers who saw it and cried, “A Christmas cake! You look delicious. Where are you off to?”

“I’m running away from the little red hen and the mouse and the rat and the owls,” the cake answered.

So those ditchdiggers jumped out of the ditch and began to chase after the cake.

That cake kept rolling until it came to a cold, cold stream, where washing women stood in thigh-high boots, scrubbing their clothes.

“What a delicious looking cake!” said the women. “You’d taste so fine for Christmas supper. Where are you running?”

“I’m running away from the little red hen and the mouse and the rat and the owls and the ditchdiggers,” said the cake, “and soon I’ll be running from you!”

Sure enough, the cake was right. Those women began to run too.

The cake came to a ford in the river where a fox was licking his lips, and when he saw the cake, he feigned concern and asked, “Poor, sweet little cake, where are you running?”

“I’m running from the little red hen and the mouse and the rat and the owls and the ditchdiggers and the washer women,” said the cake.

“Well, now you’re stuck,” said the fox, “since you can’t cross this ford.”

“Will you carry me across?” asked the cake.

“What will you give me if I do?” the fox asked.

“I’ll give you an egg for Christmas,” said the cake.

“OK,” said the fox, “climb up then.” So he sat, his nose in the air, and the cake rolled up to the top of his bushy tail.

“Now leap over the ford,” said the cake. “Hurry up before the others reach us!”

“I can’t leap with you sitting there,” said the fox. “You’re not high enough.”

The cake rolled up higher on the fox’s back.

“Higher still,” said the fox. “You won’t be safe enough there. You might fall.”

The cake rolled up to his head. “Is this all right?” asked the cake. “I should be safe way up here.”

So the cake began to roll.

As it did, the fox turned up his nose still higher, and the cake flew into the air. The fox caught it in his mouth and swallowed.

He licked his lips and said, “There’s nothing like a sweet, delicious Christmas cake!”

A moment later the others reached him, and they spotted cake crumbs on his furry muzzle.

“Where’s our cake?” they cried.

The fox smiled and licked his lips. “Gone!” said the fox. “Merry Christmas!”