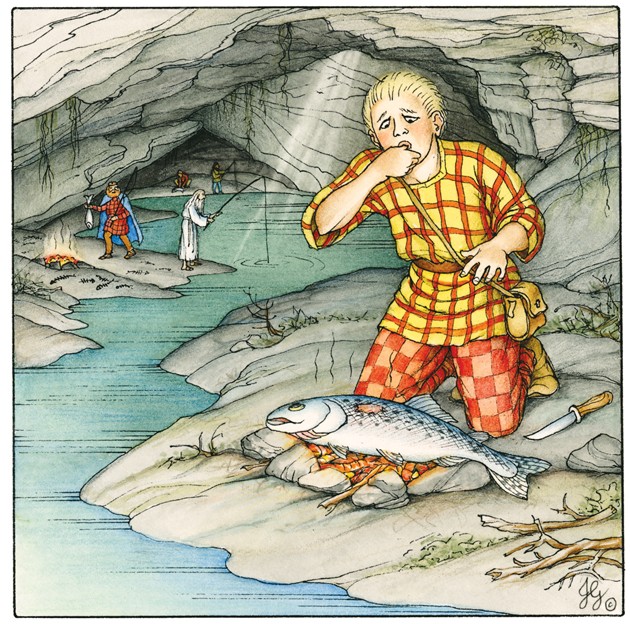 Long ago King Cormac ruled Ireland. He was a good ruler, and exceedingly generous. In fact he was too giving. Nearly every day he invited people to the castle where he provided feasts and festivals. The wine flowed, and everyone sang and danced. Cormac delighted in the bounty of his castle.

But inevitably he ran out of money to pay for these fetes. And so, worried about how to supply the bounty he had grown accustomed to, he began to look around at the lands surrounding his own.

In those days the King of Munster owned rich pasture lands on the banks of the Suir River, and King Cormac began to eye them greedily. At last, nearly out of money, he decided he would go to war to win those lands for his own kingdom. There he could feed herds of sheep and cattle, and he would have plenty of meat.

But the King of Munster had a strong army, and he loved his fields and vowed to defend them with all his strength and power. When Cormac heard tales of this fierce army, he sought the wisdom of a Druid. He wished to know what the future might bring. He wanted to know what he would have to do to defeat such a great army, and if he had any hope of doing so.

The Druid listened and told the king of one way he might defeat any army, becoming the most powerful man in the world: In one of the rivers running underground in the western land known as Mayo, there swam a magical salmon. “Catch this fish and eat him,” the Druid told Cormac, “and you will possess all the wisdom, strength and good fortune you could ever wish. The moment you taste this fish, you will have success in every venture. You will be admired and loved by everyone, everywhere.”

Naturally Cormac set out at once on an excursion to catch that magical salmon. He and his men reached the banks of the river of the fertile valley and, just as the Druid had said, the valley led to a secret cavern — one that vanished long ago. In that quiet, shady cavern, Cormac and his men found a deep, cold pool swarming with wild salmon that swam and danced over the whirlpools. This was the place, Cormac understood, where he would find the Salmon of Knowledge.

But there were thousands of salmon swimming there, and the Druid did not know how to recognize the special one. So Cormac and the Druid began to fish, cooking each one over the fire. They tasted each and every one. But Cormac remained just as he had always been — a pleasant fellow, but no wiser, no more powerful. Before long he was tired of eating fish. “I long for meat,” he complained. “Surely there must be a way to select the Salmon of Knowledge from among all these?”

So he and the Druid changed their methods. Now each time they caught a fish, they studied it before they decided to cook it. They chose to keep only those that were plump and beautiful and pink. No one really knows why they decided the Salmon of Knowledge must be beautiful, but they did.

One evening they caught a thin, tired-looking fish with a hooked snout — no beauty at all. Naturally when they saw it, they decided this could never be the special salmon. Instead of tossing it into the river, they merely dropped it on the shore, and it began to wriggle its way back toward the cool water.

But as it happened, a lad — one who appeared to be only a simple gossoon, or servant — was watching them, and when he saw the fish wriggling onshore, he whispered to himself, “That may not be good enough for a king, but it looks just fine for me.”

This lad was Finn — the son of Cumhal, grandson of Trein the Big, who had saved his people of the Western Sea and had created a great warrior people. Alas, when they were beaten in battle, Finn’s mother gave him for safekeeping to a Druidess who raised him, and to that day he had no idea of his great heritage.

But he was hungry, so he lit a fire and put that skinny fish on it to cook. Very soon a blister began to rise on its silvery side, and when Finn saw this, he was uneasy — perhaps there was something wrong with the creature. He pressed his thumb against the swelling, and it burst open and burned his thumb.

Instantly Finn pressed the thumb to his mouth to cool, and in that moment, everything changed. The second he touched his teeth, he turned into a wise, all-knowing lad. He had always been tall and beautiful and strong, but now he was also wise — as if he had been 100 years old. He could see the future, too. He could see his future glories and the failure of his enemies. Everything flashed before his eyes, and he saw that everyone would sing stories of his fame.

This was the boy who became known as Finn, the fair leader of the Fianna, that great brotherhood of men. The Fianna were mighty hunters and warriors, with no fixed calling. They owned rich robes and gold ornaments and beautiful weapons, but they lived in the wild, among the deer and wolves of the forest. The Fianna, and their great leader, Finn, became famous for their courage and strength and beauty. Some say it was all because of the Salmon of Knowledge.

As for King Cormac, he lost his battle when he never could find the Salmon of Knowledge. And it was only after he lost everything that he realized what he once had.