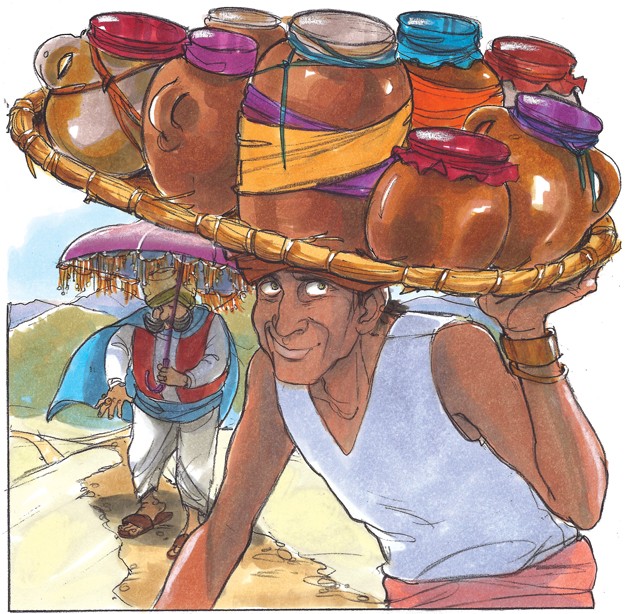 Once upon a time, a wealthy oil merchant wished to take his pots of oil to a faraway market. He arranged the pots on a flat basket, but the road was long and difficult — it was a winding road through the mountains. And so he decided to hire a poor Santal to carry the basket for him.

The Santal was very pleased, for the merchant offered to pay him four rupees for his troubles. This was a vast amount for such a poor man, but because the Santal was agile and able, he was confident of his ability to do the job. He smiled, placed the basket upon his head, and the two men set off.

As they walked along, the Santal began to daydream. With just a few rupees, he thought, his life would change. He would buy himself a good meal — curried rice, perhaps, and vegetables, too.

His smile grew broader and broader as the dream grew bigger. Goats! How wonderful it would be to own goats, he thought, and as the number of his goats increased — well, soon he would own a great herd. And he could sell some goats, and with the money he earned from that sale, he would buy cows. Naturally, cows!

The very idea of cows filled his heart with such joy that he could smell their hides. He could smell the fields. He saw those calves being born in the fields, and he decided he would sell those calves for buffalo. Yes, that’s what he would do. He’d love to own a buffalo, or 10, perhaps. He could see that herd of buffalo growing larger and larger, and with the sale of those buffalo, he would buy a plot of land.

He envisioned the land — somewhere in the rolling hills, or even nice, fertile property somewhere near the sea, perhaps, or near the mountains, or both. He would cultivate the land. Yes, he could smell the soil, rich and dark, and he could see those rows of beans and sugarcane growing under the hot blue sky. And he would plant banana trees — and wheat and okra, too. His neighbors would delight in his fields and his coffers would grow with the sale of all that fine produce.

And as he grew richer, he would meet many lovely women, and he would marry the loveliest of all those women he met. She would be beautiful and wise and hard working and kind, and he and his wife would have children — one after another.

Each day, after a long, hard day of work in the fields, when he was tired but fulfilled, he would hurry home. His wife would greet him with her exquisite smile, and she would offer him a nice, big cup of cool water from the well. After his thirst was satisfied, he would climb into his big, comfortable bed to rest awhile.

As the sun would set, the children would run into his room and try to wake him. They would call, “Father, wake up and wash your hands, it’s time for dinner! Mother has prepared a fine meal.”

“Not yet, I’m still sleepy, let me rest,” he would say. All that work under the blazing summer sun would have exhausted him, and he would long to sleep just a little bit longer.

But the children would insist. “Father, wake up!” they’d cry.

So lost was the Santal in his dream of the future that he began to shake his head and mumble, “No, I need to sleep just a little bit longer.”

When he shook his head, the basket fell, and all those pots of oil smashed to pieces.

“What are you doing, fellow?” the oil merchant cried. “Have you gone mad?”

The merchant’s shriek woke the Santal from his slumber and from his dream. As he opened his eyes, he stared down at the oil seeping into the earth and at those shards of glass, and he silently cursed himself for all his dreams.

“How could you do such a thing?” the merchant said. “That oil was precious to me! You promised to do your job, and now you have ruined everything!”

The Santal could only shake his head, for he could not imagine how this had happened. Still lost in his dream, he wondered where his children had gone — and his wife and the buffalo and the cows and the goats and the chickens. Where was his fine plot of land?

“You’ll have to pay me for the oil and for the pots!” the merchant said.

The Santal shook his head. “Ah, but I have lost much more than just the oil and pots,” he said. “So much more.”

“What on earth do you mean?” the merchant asked.

The Santal nearly wept and said, “With the wages you paid me, I planned to buy chickens and goats and cows and buffalo and land. My land was to be so fertile that a woman of beauty and wisdom would fall deeply in love with me, and we were to have many children, but when my children tried to wake me, I shook my head no. That is how I came to spill the oil.

When the oil merchant heard this, he began to laugh and replied, “Your tale amuses me, young man. You spilled my oil and broke my pots, but you filled my heart with your imagination, so let us call it even.”

And when he heard this, the Santal, too, began to laugh.