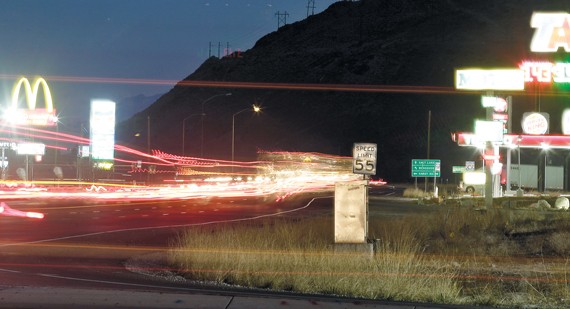 Car lights streak across SR-36 in Lake Point Thursday morning during rush hour. A fatal crash on Tuesday has called the area’s traffic safety into question.

A fatal crash on SR-36 in the Lake Point business district has renewed concerns the short stretch of highway is one of the most dangerous in the county.

“It’s always a scary thing around here, coming to or from work,” said Ginger Martin, manager of the Oquirrh Motor Inn in Lake Point next to the highway. “You have to dodge out to get past the first two lanes and then sit in the middle as you’re trying to get in the flow of traffic.”

A crash Tuesday claimed the life of a mother and her daughter (see story on A2). It’s the most recent of several serious accidents in the stretch between I-80 and Saddleback Boulevard in the last few months, including a pileup of four separate crashes on Oct. 10 at the on-ramp onto I-80 from SR-36. The day before the pileup, a homeless man was injured after he was struck by a car while crossing against the light at Saddleback and SR-36.

In May 2011, a Tooele man was killed when driving his motorcycle northbound through the area after colliding with a Dodge Caravan that failed to yield to traffic. A Virginia couple was hit while trying to walk across the highway from the Oquirrh Motor Inn to McDonald’s in May 2010, with the woman ending up in a coma while her husband was injured. And in October 2008, a teenage girl from Tooele was critically injured after trying to make a left-hand turn onto southbound SR-35 from Clinton Landing Road and being T-boned by a semi-truck.

Lt. Corey Nye of the Utah Highway Patrol said while there have been a number of significant crashes — and subsequent traffic problems — in the area recently, it is difficult to pinpoint the circumstances. He said some areas will mysteriously see an uptick in accidents for a while, and then the concentration of incidents will move to another area.

“I’m hesitant to call it a problem area because they tend to move around,” he said. “Right now there have been a lot of crashes at Lake Point, but it might change and the problem area might be at milepost 31 [about 10 miles east of Knolls] with people falling asleep.”

Aireann Lindsay, a Tooele resident and director of sales at Comfort Inn at the corner of SR-36 and Saddleback, said because of the location of her desk and office, she has a front-row view of traffic every day, and for every crash she sees, there are several near-misses.

“My office looks right out onto SR-36, and with our location, I look right at the intersection,” Lindsay said. “Cars run that red light all the time. There’s probably three accidents a week that we witness. We’ve had guests comment and say it just seems like a really dangerous intersection.”

Dixie Nelson, a Stansbury Park resident, said she travels to Salt Lake about once a week, and to Lake Point about twice a week besides, and constantly finds the traffic conditions in that area dangerous. Two frontage roads, going from Saddleback Boulevard to businesses on both the east and west sides of the road, would do a lot to cut down on the number of vehicles entering and exiting the highway, she said, and cement barriers could then be placed down the middle of the road to prevent cross-lane crashes. She has not told the Utah Department of Transportation or any other traffic-related organization her ideas, though, because she does not believe it would help.

“Would they listen, would they care? Is it that much of a priority? What’s going to have to happen to make it a priority with them? I hate to be cynical, but sometimes things don’t get attention until they get really bad,” Nelson said. “The traffic is bad, and there are more and more cars, and as long as there are more cars the traffic won’t get better.”

Adan Carillo, public information officer for UDOT, said he is not aware of any complaints about the traffic on SR-36 in Lake Point. A traffic study was done in the area about a year ago, he said, but he does not know the results of that study. In general, he said, if a study indicates a change to a stretch of road would improve safety, the speed at which those alterations are done is dependent on the amount of funding available, how difficult or involved the project will be and where the project ranks on the statewide prioritization. Traffic studies are sometimes prompted by a rash of incidents or a particularly serious crash, he said.

Carillo said as the ultimate cause of this crash has not yet been determined, it is difficult to conclude at present if a UDOT change could be made to improve the safety of the area.

Martin said she believes a big part of the problem is the clash between commuter and long-haul traffic. People driving to or from work can be impatient, she said, and semi-trucks going from rest stop to rest stop, or exiting or re-entering the highway, are often larger and slower than the daily drivers.

“The speed, the people coming off the freeway, it’s just dangerous speeds. I’d like to say I’m some great person who slows down to a crawl when I come off, but that doesn’t happen,” she said. “I wish that they had a road behind that truck drivers from, like, the TA, would be able to drive behind and go to the Flying J and connect to that light, so they didn’t have to pull out.”

Nelson believes excessive speed is the biggest danger in the area.

“They won’t slow down, even though there’s a speed limit,” she said. “It doesn’t seem to be enforced because people go through the business district at way over the speed limit. There’s a lot of traffic on and off the road. It’s almost like speed racing because you have to get on and off so quickly.”

Lindsay said she also thinks that more enforcement of speed and lane usage, along with a lower speed limit, would go a long way to reducing the problem.

“People just do not yield, and the biggest thing I have seen as well is when people pull out from McDonald’s or the TA truck stop and go into the center lane, instead of stopping they just continue down that center lane,” she said. “Maybe it would help to have more control from the highway patrol or local law enforcement, and a lower speed coming off the highway that would be enforced.”

Nye said the visibility of troopers tends to garner compliance with speed limits, but with the size of the department and the sheer length of the road under its purview, it is impossible to be everywhere at once.