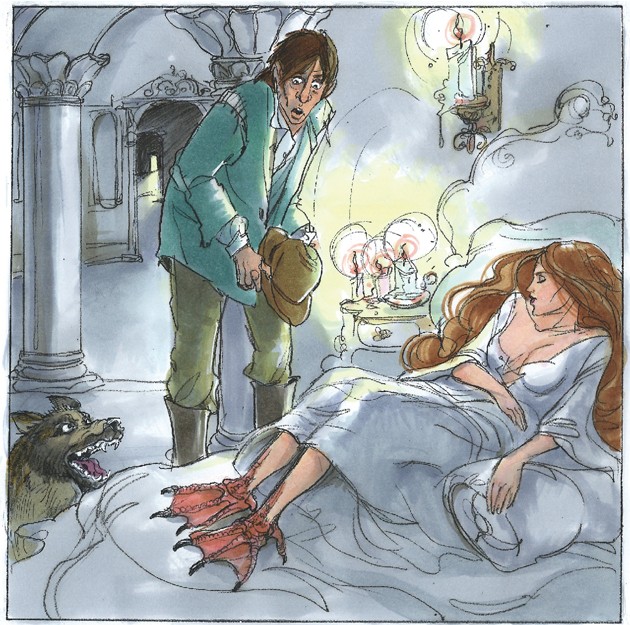 Once upon a time, near Orbe in Switzerland, people there spoke of fairies who lived in a deep cave in the Jura Mountains. Everyone knew about the fairies, but few had actually seen them. Once, a child walking in the mountains saw a fairy dressed in white leading a sheep down a path. The child hurried home and told her father, a farmer, and that year’s harvest was bountiful.

The very next year, an old woman saw a fairy dressed in gray leading a goat down a mountain path; that year the harvest was poor. Sometimes one of the townspeople spotted a fairy dressed in a long white gown bathing in the river; some heard the fairies singing late into the night.

One day, an ironworker named Matteo decided he must see the fairies, and so he hiked into the mountains and made his way to the cave where the fairies were said to live. At the entrance, he called out, and when he heard nothing, he walked inside.

It was pitch-dark and quiet; the only sounds were his footsteps as he made his way deeper and deeper into the cave. After a long while, he came to a bed of moss, and suddenly exhausted, he lay down to nap.

Matteo then woke to a cave filled with light. A beautiful woman dressed in white stood over him, whispering, “Matteo, please wake up.”

He could not resist the sight of her face — she seemed almost an angel, surrounded by a glowing light.

“Stay here with me,” she whispered. “If you do, I promise you a hundred years of happiness. I will teach you all the secrets of the fairies.”

Matteo sat up and nodded. He could not resist. He knew he would do anything this creature wished.

“I love you,” he whispered. And it was true. His heart had never felt so full.

“Good,” she said, “but one thing you must know. I will teach you every secret, and I will make you happy, but you must see me only when I wish you to see me. Never follow me. Promise me that.”

The fairy disappeared then, but she returned with a wonderful meal — fresh trout from the river, venison from the mountains, sweet fruits and rich honey. She taught him a song that night — a song he recognized from childhood, the sound of summer wind. Afterward, she kissed him and said goodnight, and she disappeared into the depths of the cave.

The next day she returned, with more fine food and lessons — she told him all the secrets of the fairies, the powers of precious metals and healing herbs. She told him stories. And each night she hurried away.

Two weeks passed. Matteo was pleased with his new life — eager every day to learn another secret. But then, one evening, as the fairy said goodnight and turned to leave, he reached out and touched her arm.

But she simply smiled and turned away and disappeared into the darkness.

After that, whenever she was preparing to say goodnight, his heart swelled with loneliness, and when she disappeared, he could not sleep. He lay awake, thinking only of when he would see her again.

Three weeks passed, and one night as she turned to leave, he stood up and began to follow her.

“No,” she said. He saw she had opened a door, but she did not close the door behind her.

He tiptoed close. He looked behind him. No one was there. Surely she would not notice if he only peeked behind the door. He pushed it open, and he walked into the darkness until he saw the light of her luminous gown.

He saw her lying on a velvet bed. She was fast asleep. He stood there staring — captivated by her beauty. But for the first time he noticed her feet were not like human feet. They had no heel, and were like the feet of a goose. The sight alarmed him, and he gasped and turned to run away.

Just then a dog began to bark, and he noticed for the first time there was a guard dog sleeping by her bed.

The fairy woke and saw Matteo turning to run away. “You fool!” she cried. “You promised you would not follow me! Now you must leave, and you will not remember anything you have learned in this cave.”

With those words, she vanished, and the cave grew as dark as a moonless night. Matteo was left all alone.

Once again, he felt his way along the edges of the walls until at long last he found the place where he had entered. He walked out of the cave and made his way back down the mountain, back to the forge.

“Where have you been all these weeks?” his fellow workers asked, and he began to tell them of the fairies.

“Tell us, then,” they said, shaking their heads. They did not believe a word he said.

“I shall,” Matteo promised, but try as he did, he could not remember one secret. He remembered only the sight of her odd fairy feet and the darkness of the cave, and the sadness in his heart. He was silent.

The people laughed at him.

“I’m telling the truth,” he said. “Believe me, please, I lived with the fairies for three whole weeks, and once upon a time I knew their secrets.”

“You’re a madman!” some of the people exclaimed.

Others just said, “You are a liar.”

Matteo wept, for he had no proof of his time in the cave of the fairies, but he still had a broken heart.