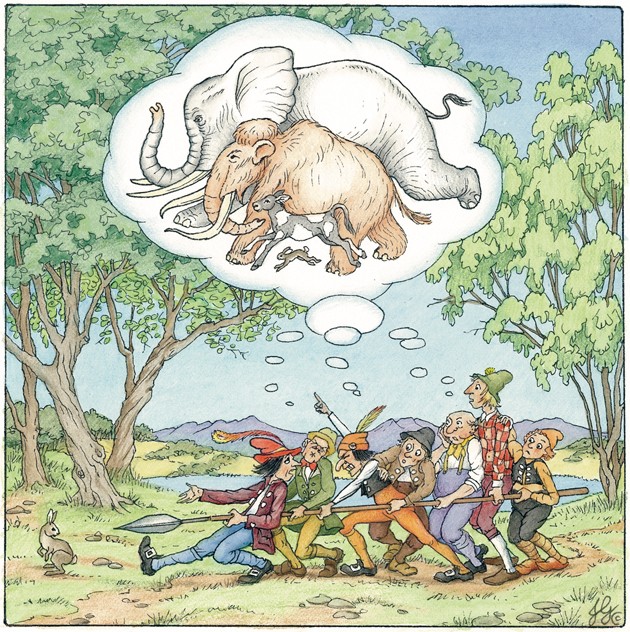 Once upon a time there were seven men from Swabia, and they were called the Seven Swabians. There was Herr Schulz and Herrs Jackli, Marli, Jergli, Michael and Hans, and the seventh Swabian was Veitli.

All seven decided they wished to be great heroes. To do this, they decided they must travel the world. They would seek adventure everywhere they wandered, but best of all, they planned to perform great deeds.

“Yes, we shall be doers of the greatest deeds of all!” Herr Schulz proclaimed.

Veitli nodded heartily and said, “We shall need to be protected, too!”

“Hear, hear!” the others cried.

And so they decided they needed to have a great weapon made, and they went to see a blacksmith. He forged a shining, pointed spear — a spear long enough for seven men.

All seven men took hold of the spear, with Herr Schulz in the lead and the others following, each one in order.

“Don’t forget me!” Veitli cried as he took up the rear.

They were enjoying the warmth and sunshine of July when they set off for Lake Constance. They had heard tales of a great monster that lived there, and they wanted to conquer the creature.

“That will be a great deed, indeed!” said Herr Schulz.

“Yes, it will!” echoed five of the other men.

The seventh man, Veitli, called out, “Off to slay the monster!”

They marched for a long time, but they had many more miles to go until they reached the village near Lake Constance. It began to grow dark when they came to a meadow.

“We’ll camp here for the night!” Herr Schulz said, and the others agreed. So they stopped as the sun began to set. Just as it was growing dark, there was suddenly a great buzzing sound behind them, and they felt something whiz past.

It was only a hornet, but in the dark they could not see.

Herr Schulz cried, “What’s that? It sounds like drums!”

“The enemy’s drums!” screamed Jackli, who stood right behind him.

Behind Jackli stood Marli, who sniffed the air. He was certain he smelled smoke.

“I smell the enemy’s fire!” he cried.

When Herr Schulz heard that, he dropped the spear and began to run. As he ran, his foot happened to land on a rake that had been dropped in the field. When he stepped on it, the handle popped up and hit him in the face.

The others ran toward him, each one screaming, “I surrender too! We follow our leader!”

But a few moments later, when no one appeared, the men decided they had been deceived.

“It must have been my imagination,” Herr Schulz said.

“And mine,” said Jackli and Marli.

“And ours,” the others agreed, and they made a pact never to tell a soul. They did not want to seem like fools.

So they slept through the night and into the morning. Then they traveled on till they came to a great forest. They would have to cross the forest to reach Lake Constance, but they felt brave and strong. So they marched in.

The forest was thick and quiet, and the men marched quietly, one behind the other, carrying their spear. Presently, they came to a clearing where a hare was sleeping peacefully in the sun.

The others kept whispering, “The monster is before us! There he is …”

They began to tremble at the very mention of this terrible beast.

“We must not run away,” Herr Schulz said.

Jackli nodded. “We cannot run away,” he said, “or the beast will chase us.”

“The monster is out to get us!” Veitli whimpered.

Herr Schulz then said, “We have to fight a dangerous battle, men.”

And with that, he held the spear tightly, trying to hold them back. He was terrified of the monster.

But in the very rear, Veitli became eager to push forward.

“Strike out in the name of the Swabians!” he shouted.

But Herr Schulz held back still and said, “Do not brag, my friend.”

Behind him, he others nodded in agreement.

“Let Herr Schulz go ahead!” they cried. “That is the honor he has won for being No. 1!”

Upon hearing this, Herr Schulz knew he would have to plunge forward. He closed his eyes and prayed silently for assistance. Then he screamed out, “Hau, hau, hau! Hurlehau!”

At the sound of that cry, the hare woke up. When he saw the Seven Swabians before him, he turned and scurried away.

And when Herr Schulz saw the creature running, he turned to Jergli and said, “That monster was a rabbit!”

But Jackli looked and said, “The monster was as big as a calf!”

Behind him Marli said, “The monster was as big as a mammoth!”

“He was bigger than an elephant!” the others cried.

And since the monster was gone, the Seven Swabians cheered and congratulated themselves for frightening such a terrifying creature. So off they marched to town to celebrate their great adventure!