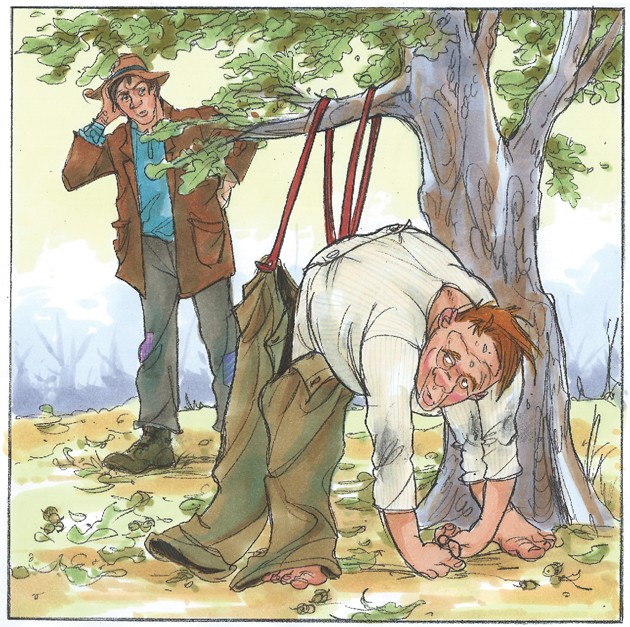 Once upon a time, a young girl named Oona was so foolish that people kept their distance from her. As she grew older, she grew even sillier, and her mother worried that no one would ever marry her.

But one day a young man named Milo came to town. When he spotted Oona in the marketplace, he fell in love. Oona was a pretty thing with sparkling blue eyes and a big, bright smile, and Milo decided to woo her.

Oona’s mother was overjoyed. She planned a party for the young man with waffles, chocolates and gingerbread cakes. When Milo arrived, Oona’s mother turned to her and said, “Dear girl, go down to the cellar and draw a jug of ale for your lad.”

Oona skipped downstairs, but a long time passed and she did not reappear. At long last her mother walked downstairs to see what had happened.

There she found Oona with her head in her hands, tears pouring down her face. She had forgotten to close the keg, and ale was spilling all over the floor.

“What’s wrong with you?” her mother asked.

“Oh, mother,” Oona said wearily, “I began to think about marrying Milo, and I thought about the first child we shall have, and I wondered what we could name her — I thought of Emma and Elise and Julie and Camille and so many more, but all the good names are already taken!”

“Ah,” said her mother as she sat down beside her daughter. “Let us think about this, for surely together we can find a name that no one has.”

A long time passed. Upstairs, Oona’s father and Milo were talking. When half an hour had passed, they decided it had been a long time.

When he walked downstairs, he saw that the ale had spilled all over the floor, and his wife and daughter were sitting on the steps, heads in their hands, tears in their eyes.

“What are you doing?” he asked. “There’s ale everywhere!”

His wife looked up and said, “We were thinking about what to name the child our daughter is going to have after she has married Milo. But no matter how hard we think, we cannot find a single name that isn’t taken. Not Mona or Rose or Charlotte or Bo or Kat.”

“Ah,” the father said, nodding. “Surely I can find a name or two. Let me sit with you and ponder this.”

Upstairs, Milo was waiting, but neither Oona nor her parents returned for a long time. At last he walked downstairs to see what had become of them, and he found all three sitting on the steps, tears in their eyes, ale spilled everywhere.

“What is happening?” he asked. “There’s ale all over the floor.”

“Yes, that is true,” the father said, looking around, “but we have realized that if you marry our Oona and you have children, they will have no names, for we can think of no names that aren’t already taken.”

Milo’s eyes opened wide as he listened to this. Finally, he said, “I have never heard such foolishness in all my life! You three are the silliest people I’ve ever known.”

“We are not!” cried Oona, as her mother and father nodded.

“I’ll tell you what,” Milo said, “I’ll go traveling. If I can find three people sillier than you, I shall come back and marry you, Oona.”

He set out that very afternoon.

Milo walked a long way, and just before sunset, he came to an orchard where a man was knocking walnuts off trees, trying to toss them into his cart with a fork.

“What are you doing?” asked Milo.

“Trying to load my cart with walnuts, but I’ve had no luck.”

“Why not put the walnuts into the basket you have and carry it back to the cart?” Milo said.

“Good idea!” the lad said, and Milo thought, “This is someone more foolish than my love.”

So Milo traveled on. The next morning he came to a wooded area and found a pig standing at the bottom of a tree. The man beside him was swatting him with a whip, crying, “Climb that tree and eat the acorns!”

But the pig wouldn’t budge.

“Why don’t you just climb up the tree and pick the acorns for your pig?” Milo asked.

The man’s face lit up with joy. “A great idea,” he said, and Milo knew he’d found a second fool.

The third day, Milo came upon a man who had fastened a pair of trousers to a tree. The man was jumping up in the air, trying to land in those trousers. He kept falling, because he couldn’t get both legs to land at the same time.

“What are you doing?” asked Milo.

“Trying to jump into my trousers,” said the man.

“Why don’t you hold them and put one leg in first, then the other?” Milo asked.

“Grand idea!” the man said. “I never thought of that.”

Milo knew that he had found three people who were more foolish than Oona or her parents.

He hurried back to Oona’s village and bent down on his knee and said, “Marry me,” and she said, “Yes, I will!”

They married, and they had a great many children. And every single child had a name, although no one knows exactly what their names were.