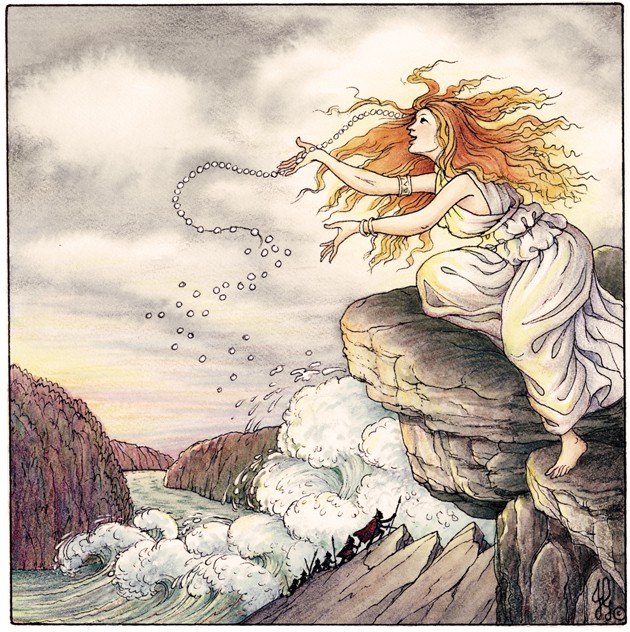 On the Rhine River, on the eastern shore, atop a steep rock, there once lived a nymph named Lorelei. She dressed in white and wore a wreath of stars in her hair. She was exquisite, but more than her physical beauty was the song she sang — a song so alluring, no one could resist its pull. People said that anyone sailing close to that rock would lose his life for her song was irresistible, and no sailors who tried to reach Lorelei ever returned.

There was, long ago, one proud young warrior who lived in the Palatinate Court with his father. The young man’s name was Ronald, and he was the light of his father’s life. One day, as Ronald was boating down the Rhine with an old sea captain, he heard Lorelei’s song. In that moment, he could think of nothing but her. He longed to hold her, and he felt as if invisible arms were pulling him toward her, though anyone seeing him from afar would have seen nothing but a sailor pulling on his oars, rowing hard toward the rock.

Twilight’s haze shrouded the Rhine Valley as Ronald approached the rock. His boat was nearing the cliff as the sun began to set behind the mountains, and darkness fell like a curtain. And silence fell too. The only light seemed to shine from the evening star high above him. That star seemed to be an angel set in the sky to protect helpless young men.

For a while Ronald stopped rowing and gazed at the star, but then the old man sitting beside him cried, “Stop, we must turn around. You’re heading toward Lorelei, the enchantress.”

But it was too late. Hearing that name, Ronald opened his eyes wide and saw that beautiful creature combing her copper hair, her dress flowing in the evening breeze. It seemed to Ronald that the only light left in the world was the light surrounding her. Despite the darkness, she was composed of light — gleaming eyes, shimmering lips, her face aglow. And her song cut through him like a knife to the heart, a plaintive, longing song. It called to him, “Come to me, come to me…”

When Lorelei looked down at him, he trembled and could not take his eyes away from her. He could think of nothing but how marvelous this moment was, and in his trance, his boat crept slowly to her, and to the rocks.

But the boat was moving too slowly for Ronald. When she called, “Ronald, Ronald,” he dived into the water.

People say they heard a scream, a death-like sound coming from the rocks as the waves washed over Ronald’s body.

The old boatman wept as he worked to steer the boat away from the shore. Lightning stabbed the sky. Thunder rumbled over the mountain. Still the song of Lorelei filled the air.

Somehow that old man made his way home, and before long the court heard the news of the young man lured by the siren to his death. Ronald’s father, sick with grief, ordered his soldiers to bring the enchantress to court, dead or alive.

Off they set on their quest, and as those soldiers neared the rock, the leader looked up and cried, “Let us throw her from the rocks to the sea! Let her know the death she has caused others!”

At that moment the first shade of twilight draped itself over the mountains. The armed men began to climb up the side of the mountain, toward the peak. Above them they could see the top of that mountain was veiled in mist. They thought it was the last rays of the sun, but it was the light that wrapped Lorelei in its embrace.

There she was, dreamily combing her hair.

As the men drew close, she reached inside her dress and removed a string of pearls, bound these around her head and looked at the soldiers. “What are you doing here?” she cried. “You are mere men!”

The leader cried, “You are a sorceress, and we are here to destroy you.”

The next sound they heard was a laugh, a laugh that echoed from every corner of the valley. “The Rhine is coming for me,” Lorelei called, and she bent over the precipice, tore the pearls from her head and hurled them into the water. Then she began to sing: “Father dear, send forth thy steeds from waters clear, and I shall ride with the waves and the wind.”

At that moment a storm burst into being. The Rhine began to whirl and rise. Foam covered the banks, rising higher and higher until it reached the nymph. It lifted her into its arms and carried her down into the rushing current. And at the same time, Ronald’s body appeared, washed ashore.

The terrified men returned to the palace to tell the court the news. From near and far people came to mourn Ronald and to gaze at this place, to search for a glimpse of the famed sorceress, but from that day on, no one ever saw her again.

Some sailors say they occasionally see her on the hills. Now and then a passing boater claims to hear her voice, soft and low, echoing from high above. And everyone who passes that rock looks up, half-hoping for a sight of her, and half-afraid.