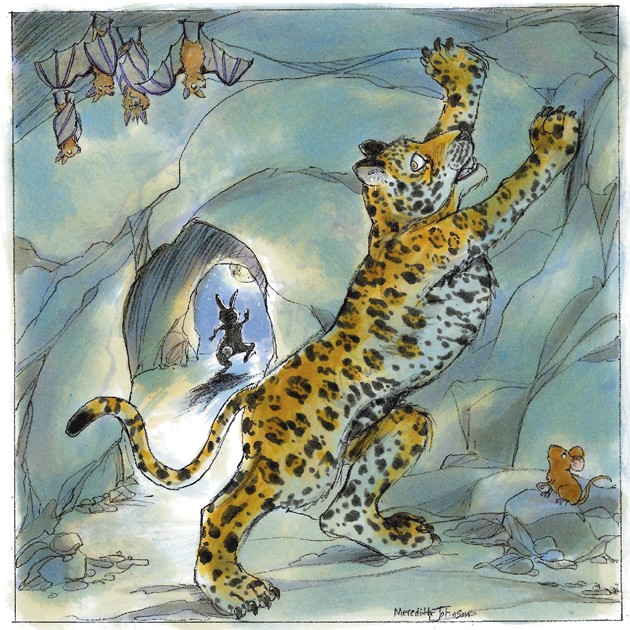 Once upon time, Juan Carlos and his wife, Yesenia, lived in a small coastal town in Mexico. They were very poor and owned almost nothing. But they had a pet rabbit they called Juanito.

The couple loved their rabbit, and the rabbit loved them.

But as time passed, they grew poorer and poorer. One morning, Yesenia opened the kitchen cupboard and discovered they had no food at all.

It was the holiday season, and their family was coming to visit. “Juan Carlos,” she said, “we have no food at all. Give me some money, and I will go to the market.”

Her husband shook his head. “I’m sorry, but we have no money.”

Yesenia shook her head and wrung her hands. “We are going to starve!”

Juan Carlos thought a while. “We have our rabbit,” he said. Yesenia wept, but she nodded as Juan Carlos filled a pot with water and set it on the fire to boil.

Just at that moment, a jaguar was walking past, and when he saw the pot boiling on the fire, he looked across the yard and saw Juanito asleep in his cage. The jaguar shook his head at the sight and sidled over to the cage.

“Ah, my poor friend, you are in trouble,” the jaguar explained. “Your family is boiling water, and soon they will be cooking you!”

Juanito looked at the jaguar, and he looked over at the house. Then he laughed. “Don’t be silly,” he told the jaguar. “Juan Carlos always boils water to make hot chocolate in the morning. Soon he will bring me my big cup of hot chocolate. Ah, it is so delicious.”

“Ha!” the jaguar sneered. “They’re going to eat you up, and I will make certain to grab a piece.”

“You are a fool,” Juanito said. “If you get into my cage, I’ll prove to you that they are preparing chocolate. Come on in, and I’ll let you have my cup this morning.”

The jaguar was terribly hungry, and the thought of hot chocolate made his head spin. Gingerly, he stepped into Juanito’s cage.

“Wait here, and I’ll go get your chocolate,” Juanito said, and with that he closed the cage door behind him and dashed away.

As time passed, the jaguar grew tired of waiting for his hot chocolate. Finally he understood that the sly rabbit had tricked him. This made him so angry that he burst out of the cage and began to run through the forest in search of Juanito.

He ran and ran, calling out, “Juanito, I’ll find you!”

Just before nightfall, the jaguar reached a cave. There he found the rabbit leaning up against the wall.

“Ha!” the jaguar growled. “I’ve caught you. You thought you could trick me, but here we are, together again, and this time I’ll pay you back for your trick!”

Juanito looked closely at the jaguar. “What are you talking about? I’ve never seen you before. I’ve always lived in this cave, and as you can see, I’m busy holding up this wall so that my cave won’t come crashing down and crush us all!”

“What?” the jaguar asked, confused. “Do you mean to say you’re not Juanito?”

“Stop asking so many questions,” Juanito said. “Make yourself useful and come help me hold up this wall while I go find some others to help. Remember, if it falls, we’ll be crushed!”

The jaguar did not like the idea of being crushed, so he leaned against the wall and the rabbit ran off.

The jaguar stood there for a long time. When dawn broke, he realized that he had once again been tricked. “This wall won’t fall,” he admitted to himself, and he gingerly stepped away. Naturally, he hoped he was right, though he couldn’t be sure.

The wall, of course, did not fall down.

Now the jaguar was more determined than ever to punish Juanito the Rabbit. He ran off to search for him, and just before dark, he saw Juanito celebrating his freedom by swinging from a vine. He was swinging this way and that, over the river and back again, enjoying himself so much that he didn’t notice the jaguar at all.

The jaguar then leaped with all his strength and caught the vine. He pulled and pulled until the vine was tight. And then he let go.

The vine snapped and tossed Juanito up and up, all the way to the moon. Again, the jaguar was foiled in his efforts to catch the tricky rabbit.

Ever since that day, when you look up at the full moon, you will see Juanito there, laughing, happy that he finally reached the moon — and that he tricked the angry jaguar.