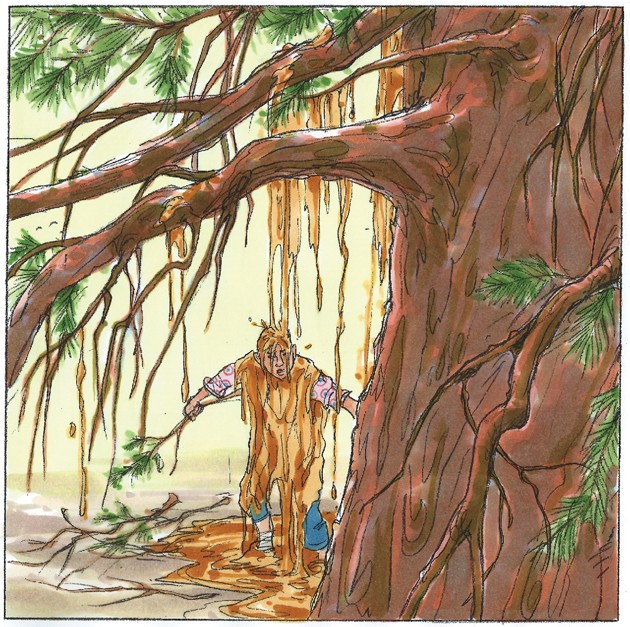 Once upon a time, a poor woodcutter struggled to make a living. No matter what, the woodcutter was generous and kind to all. He was kind to people, animals and trees. He never tore living limbs for firewood. Rather, he gathered dead branches. He understood that when people tore off branches, the tree bled, and such a thought could make him weep.

One summer day, the air suddenly grew cool. The woodcutter set off into the forest to hunt for firewood. He was walking through the high pine forest when he heard a voice whispering to him.

The woodcutter turned around, but no one was there.

“Hello,” the voice came again, “my sap is quite sticky; sticky is my sap.”

The woodcutter stared at the tall pine tree before him and understood it was the tree that was speaking.

“Sticky is my sap when tender twigs are snapped,” the voice sang.

The woodcutter noticed sap was running from the tree’s broken limb. Someone had torn off its limb. The woodcutter’s heart broke at the sight, and he quickly reached into his knapsack for bandages.

“These, your tender twigs, I shall wrap,” he whispered, “and in this way, I’ll stop the sap.”

The woodcutter carefully mended the branches, wrapping them in bandages by pulling off his own jacket and tearing it in pieces to use as cloth.

When he had finished, the tree sighed and shivered, and suddenly gold and silver coins began to fall from the tree’s limbs onto the woodcutter. There were dozens and dozens of coins. They did not stop falling.

The woodcutter collected these and stuffed them into his knapsack until it bulged.

“Thank you, friend. You are a generous soul,” he said to the tree.

As he was walking home, the woodcutter began to understand that he was no longer poor, and his heart swelled with gratitude for the generous pine tree. He thought about the fact that in Japan a pine tree is a sign of prosperity, and he smiled thinking that this had never been truer.

As he passed his neighbor’s house, he noticed him sitting by the window.

“Good day,” the neighbor called, “why is your sack so full today?”

This neighbor was also a woodcutter, but he was greedy and unkind. He was forever snapping live branches from trees. He didn’t care who he hurt, and now, seeing his neighbor’s sack, he thought there must be something in that sack for him.

The kind woodcutter, who never lied, said, “It is full of coins, a gift from the pine tree.”

“Which tree?” the neighbor asked, his head pulsing with ideas.

“The big one at the top of the hill,” the kind woodcutter said. “I mended its broken branches, and it gave me coins in thanks.”

“Ah!” said the neighbor, and moments later he was hurrying into the forest. He thought only of money — how he always had to get some. He wanted to be rich. He wanted a big house and feasts and fancy clothes. He wished to spoil his wife and to make her happy. But she was never happy.

When he found the tree, he looked up and said, “Sticky, sticky, sticky tree: Give me some of your money!”

The tree shivered, remembering the pain of broken branches and the cruel touch of this man.

“Sticky, sticky is my blood,” the tree replied. “If you touch me, there’ll be a flood.”

The neighbor’s eyes lit up at this. He imagined a flood of money and his own knapsack bulging with coins. He imagined filling a wagon with still more.

“Wonderful!” he said, and he reached out and broke off another branch.

As he broke it, the pine tree began to shake and shiver and bend. Out of its bark, sap began to flow — more sap than any woodcutter had ever seen. Just as the tree had promised, there was a flood of sap, pouring out everywhere, pouring down onto the woodcutter.

Soon he was soaked with sap, sticky and uncomfortable. He reached up to touch his hair, and his hand stuck there. He reached out with his other hand to stop the flow, but his other hand stuck to the tree. He tried to stomp his feet to pull away, but they were so covered with sap, they stuck to the ground, and before he knew what was happening, he could not move. He was just about to cry out for help, but he quickly snapped his mouth closed because he feared it would also fill with sap.

For three long days, the woodcutter stood there waiting for the sun to shine down and melt the sap and free him. When at last the weather turned warm again, the sap melted, and he was free.

He crept slowly home. Once he was clean and safe, he vowed he would never again harm a tree — and he never did. He taught his children to respect the trees.

Ever since that day, all his ancestors have honored the trees.