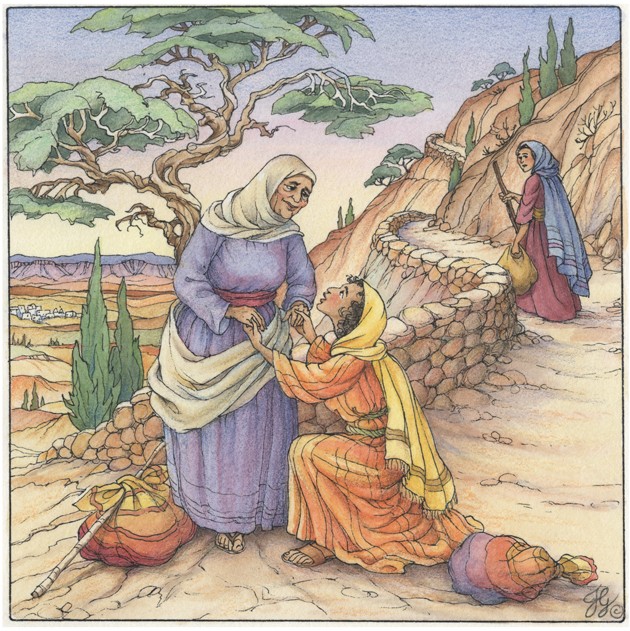 In ancient days, in the land of Moab, a young girl named Ruth often felt like a stranger among her people. She felt different from her family and from her friends. Her closest friend, a girl named Na’arah, was a slave her father had brought from the Northern lands. Unlike Ruth’s people, Na’arah ate no meat and refused to eat on the day she called the Sabbath.

Ruth admired the way her friend honored her traditions. She loved listening to stories of Na’arah’s one God, a God she could not see but who was everywhere.

One day when Ruth was still young, her father sent Na’arah back to her people, and Ruth was heartbroken, but never forgot Na’arah’s tales.

As she grew older, she noticed a family who lived among her people but remained different. They did not take part in the ceremonies of the Moabites, and like Na’arah, they worshipped just one God. They too came from the North, and they too were outsiders.

Ruth decided she wanted to get to know this family, and so, along with her friend Orpah, she began to visit. The father did not like the girls, but Naomi, his wife, was warm and welcoming. Soon Ruth and Orpah were spending many hours with Naomi.

Naomi had two sons, and the girls noticed how handsome they were. The eldest, Mahlon, smiled, and Ruth’s heart fluttered; Chilion and Orpah blushed whenever they saw each other.

When Naomi’s husband died, Ruth and Orpah became even closer to Naomi and her sons. Eventually Chilion married Orpah and Mahlon married Ruth.

Mahlon was a gentle and kind husband, and Ruth looked forward to bearing him children. She dreamed of the day they would move north to Israel to live with their family. Alas, the years passed and Ruth had no children, and she was worried by her husband’s unhappiness.

A plague swept the land and killed thousands, and among its victims was Chilion. Mahlon was distraught at his brother’s death, so unhappy that before long, he grew ill.

Ruth sat at his bedside, holding his hand. “I am going to die,” he whispered, “and I have asked forgiveness for my sins.”

“What sins are those?” Ruth asked, holding back her tears.

“Our family should never have left the Holy Land,” he said. “We were not starving, and if we had stayed, God would have protected us.”

“Perhaps …” she began, but he put a finger to her lips.

“Because I married a Moabite, I have broken my covenant with my God,” he said.

Ruth’s tears flowed. “My love,” she said, “I would have come into your covenant.”

Mahlon waved away her words. “That would not have been right,” he said. “I pray that God blesses you and makes up for any suffering I have caused you.”

And with that Mahlon died. Once again Ruth’s heart was broken.

Filled with misery, Naomi changed her name to Marah, “bitter.” Day and night she wept and prayed, begging God to forgive her and her family their sins. “My only wish is to return to die on holy soil,” she told Ruth and Orpah.

“Mother,” Ruth said, “if you go home, I shall go with you and join the faith of Israel.”

Naomi was overcome with love, but she worried for Ruth. “You would be poor,” she said, “and it is winter. We would beg for food. And keeping all the commandments is difficult. Please, stay here and keep all that is left of my property. Live here in peace.”

But Ruth and Orpah insisted they join her, and so they began the journey. Each evening, Naomi begged the girls to return home. “Go where you will live in peace,” she said.

Each day they refused.

At last they reached the land of Reuben and looked down into the Jordan Valley. Once again, Naomi said to the girls, “Go now. Return home to your mothers and find new husbands. Go, find happiness.”

She kissed them and turned to begin her long descent into the valley toward the Holy Land.

Orpah kissed Naomi. “I wish you well,” she said and she turned back home.

But Ruth refused. She took Naomi’s hands in hers. “Where you go, I will go,” she said. “Where you sleep, I will sleep. Where you die, I will die. Your people are my people; your God is mine. I swear by the God of Israel that only death shall separate me from you.”

Naomi’s heart nearly burst with love, and so the two women walked together into the valley, all the way to Bethlehem.

There, in that holy city, Ruth appeared before the elders to declare her faith. She was consecrated to the people of Israel.

Naomi and Ruth moved into a small house at the edge of the barley fields. Each day after the harvesters finished their work, the women walked into the fields and gathered the grain left behind.

One day Boaz, owner of the fields, noticed Ruth at work. Moved by the care she showed her mother-in-law, he began to watch her. The more he watched her, the more he admired her. That admiration grew into love.

One day Boaz approached Ruth and asked her to marry him. Together they consulted the elders who sought the wisdom of the prophets.

The prophets agreed: There was no reason this noble woman should not marry a man of Israel.

And so Ruth and Boaz married, and before long Ruth gave birth to a son, Oved. When he was grown, Oved had a son named Yishai, and it was Yishai’s son, Ruth’s great grandson, David, who became King of Israel.