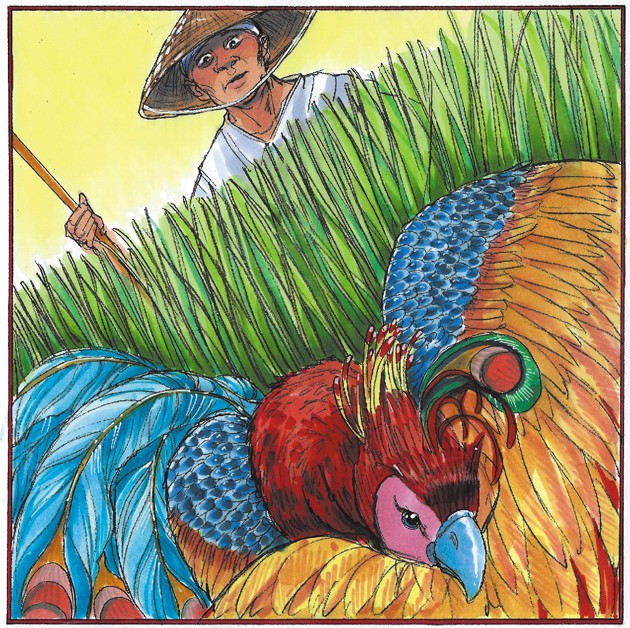 One of the celestial creatures that created the world, along with the unicorn, the tortoise and the dragon, is the emperor of birds, known as Feng Huang. After the creation of the world, the heavens were divided into four quadrants, one for each of these four creatures.

Feng Huang ruled over the southern quadrant. Everyone in China knows Feng Huang is beautiful, with a tail that shimmers like a peacock’s and a head, breast and back of brilliant scarlet. Feng Huang’s wings are enormous, and its eyes are as blue as the sea.

Feng Huang is not only beautiful; it is a noble, wise bird, and when it appears, it brings with it a treasure. But it seldom appears.

Long ago, a poor, hardworking peasant was walking to work in his fields when he was startled to see, hidden in the reeds, the glorious Feng Huang. He hurried toward the bird, but when the peasant had nearly reached the reeds, Feng Huang flew into the sky and disappeared.

Still, the peasant knew the legends, and so he thought there must be treasure buried in that spot. The whole day long, despite the cold, he dug in that spot, but he found only dirt. At last, just before sunset, he placed a clod of dirt in his bag and walked home.

He told his wife the story.

His wife was certain the dirt must be a treasure. “We must take it to the emperor,” she said.

It was the law at that time that anyone who found something of value had to take it to the emperor.

And so the peasant carefully wrapped the clod of dirt in cloth and placed it in a basket. Carrying the basket with care, he walked all the way to the emperor’s palace.

At the entrance to the palace, the peasant explained that he had brought the treasure of Feng Huang for the emperor, and so he was ushered through the palace gates and taken to him.

When the emperor reached into the basket and lifted out only a clod of dirt, he flew into a rage. “How dare you make fun of me!” he screamed. “For this, you shall be imprisoned and sentenced to death!”

And so the poor peasant was thrown into a dungeon.

The servants did not know what to do with the basket, so they placed it on a kitchen shelf and forgot all about it.

When the peasant did not return home, his wife began to worry, and she decided she must go to the palace.

When she arrived, she asked the guards where her husband had gone.

“He tried to trick the emperor,” they said. “He must die, and if you are wise, you will run away.”

“But he brought a treasure,” the wife insisted. “It is a gift of Feng Huang. Please, let me prove it to the emperor.”

One of the servants took pity on the woman. He thought of his own wife and how sad she would be if he disappeared, and so he led her to the kitchen and handed the basket to her.

“Take this home, hide it and say nothing more,” the servant said.

It just so happened that at that moment the cook was hurrying past, carrying a bowl of soup to the royal dining hall. As he rushed past the peasant’s wife, he bumped into her, and the basket tipped. A small piece of dirt splashed into the bowl of soup.

As he turned to take the soup back to the kitchen, the emperor began to shout, “Bring me my soup! Bring it this minute, or you shall be punished!”

Shaking his head, the cook said a silent prayer, and he carried the bowl into the dining hall. Holding his breath, he placed the soup before the emperor and waited to hear shouts of fury as the emperor dipped his spoon into the bowl.

The cook closed his eyes, sure he would soon be punished.

The emperor took one taste and sighed, “This is the best soup you have ever made. What did you add?”

“Your majesty,” the cook said apologetically, “a bit of dirt from the peasant’s basket fell into the soup.”

“Bring me that basket,” the emperor demanded.

The cook raced to the kitchen as fast as he could, grabbed the basket from the startled wife and returned to the dining hall.

The emperor lifted a piece of dirt from the basket and closely examined it. He noticed tiny white crystals, and he sifted these through his fingers. He took a taste. “This is a treasure,” he said. “This is a gift from Feng Huang. Free the peasant right away!”

When the peasant was freed, he led the emperor’s men to the place in the reeds where he had seen Feng Huang. There they dug until they discovered the first salt mine that had ever existed.

From that day on, the peasant was in charge of the salt mine, and he and his family lived in great comfort, grateful for the spice that Feng Huang brought into the world.