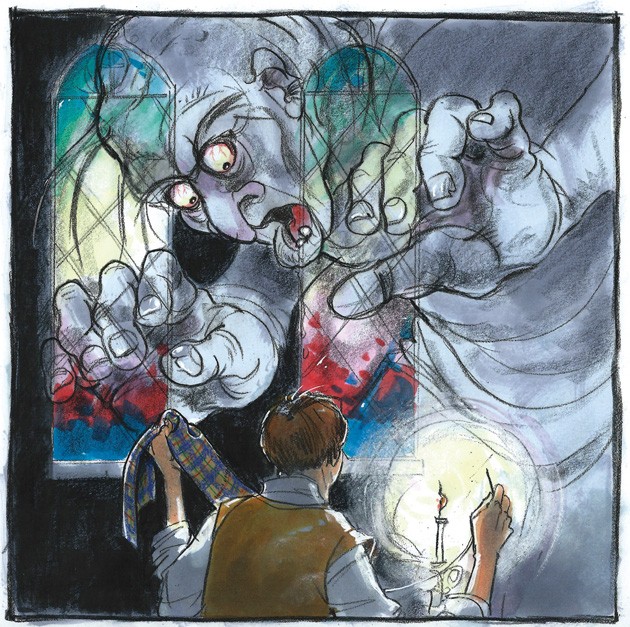 Long ago, a gentleman known as MacDonald lived in an enormous castle atop a hill. One day, he woke with a plan: He wished to have a brand-new pair of trews, the traditional vest and trousers made of one piece and fringed with buckskin.

But MacDonald had another plan as well.

MacDonald employed a tailor, but his tailor refused to do his master’s bidding this day. You see, the master wished not only for a pair of trews, but he wished his tailor to sew those trews in the church above his castle. Everyone knew that church was haunted, and terrible things happened at night in those hallowed halls.

MacDonald thought he could end the curse by having his trews sewn in the church.

And so he sought a brave tailor. “There’ll be a fine reward,” MacDonald promised, and many a tailor applied for the job. But when they heard about the haunted church, they changed their minds.

At long last, a brave young man appeared. Like the others, Thomas had heard tales of the hauntings and horrors, but he didn’t mind. He loved a dare. He longed for the reward. And he was proud of his sewing talents.

“I accept!” he told MacDonald, and he was hired.

That very evening, just before sunset, Thomas skipped up to the glen above the castle and into the big stone church. It was dark inside as he sat down in a pew, so Thomas lit a candle. Then he took his sewing kit from his satchel and set to work. Thomas was handy with the needle and thread, and he had a fine sense of design. Best of all, Thomas loved his work.

Time passed swiftly, and the trews were coming along — handsome, fine and sturdy.

The hours passed, and Thomas hummed and worked. But just after midnight, the tailor felt the floor beneath him roll and rumble. He looked around. But even as he looked, his fingers continued to sew.

Suddenly, a great human head began to rise up through the stone floor beneath Thomas’ feet. Thomas didn’t mind. He wasn’t afraid of ghosts — or so he said. He simply sewed on, and when that frightful head was fully visible, Thomas heard a deep, groaning voice ask, “Tailor? You there! Don’t you see my head?”

“I see it, but I am sewing this,” said Thomas, and he continued to stitch away, pleased to see the trews coming along.

The head rose higher and higher until a thick, strong neck appeared — a neck so strong, the veins throbbed and pulsed. The voice came again, this time louder and deeper: “Tailor, don’t you see this great neck of mine?”

“I see it, but I am sewing this,” said Thomas, and his fingers danced.

The head rose higher and higher until broad shoulders and a mighty chest appeared. Now the voice roared, “Do you see this great chest of mine?”

And once more Thomas, his fingers working away, replied, “I see it, but I am sewing this.”

That head and neck and shoulders and chest rose still higher until two muscular, strong arms began to wave, and the voice boomed, “Do you see these great arms of mine that could squeeze you to liquid?”

“I see those, but I am sewing this,” Thomas said.

Time was passing, and Thomas knew he must finish the trews soon. He sewed more quickly still, as the creature rose higher and higher. Soon a long, strong leg and enormous foot appeared and pounded the stone floor. The voice cried, “Do you see this massive leg of mine?”

“I see it, but I am sewing this,” Thomas said, and his fingers flitted and whirled, faster and faster.

He took such long stitches that the trews were nearly complete when a second leg appeared — this one longer still, and stronger, too.

Then, just before the monster ghost could stand, Thomas finished his work. He blew out the candle, rose from the pew, and clutching those trews to his chest, he raced out of the church.

As he ran, the monster ghost roared and stamped and began to chase after the tailor.

Thomas was tearing down the glen as fast as a bolt of lightning, with the monster ghost chasing close behind. It roared, “Stop now! Stop right where you are, or you’ll be sorry!” but Thomas only clutched more tightly to the trews and picked up speed.

“I’ll not listen to the monster ghost,” the tailor cried, and soon he reached the castle, dashed through the gate and slammed it closed behind him. The monster ghost, stopped by the great iron gate, pounded on the walls of the castle. His fists left marks in those walls that are still visible all these centuries later.

But the creature could not breach the enormous walls of MacDonald’s castle, and so Thomas earned his reward.

Naturally, everyone lived happily ever after — well, everyone but the monster ghost, that is. They say after that day, the church was never again haunted.