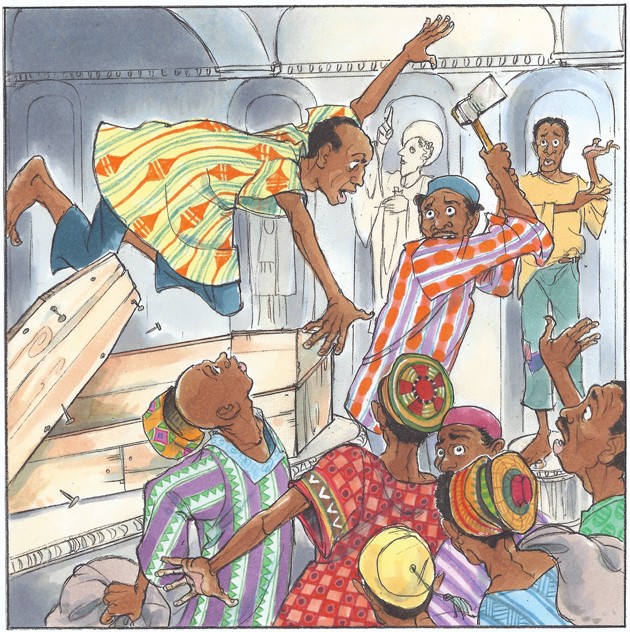 Once upon a time, a thief came upon a man in the forest who was staring up at the sky.

“What are you looking at?” asked the thief.

“Ah, I’ve just seen a jaguar flying,” said the liar. “And I’m waiting for him to come down. I’d like to study his wings.”

The thief smiled. “You and I must form a partnership,” he said. “All it takes to make a fortune is one thief and one liar, and since I am a thief, we’ll make a fine pair.”

The liar liked this idea; so together they set out to see the king of a neighboring country. As they walked, they plotted.

When they reached the palace, the liar hid in the forest while the thief went to see the king.

“Your highness,” the thief said, “let us have a feast together.”

“Impossible,” the king said. “We have a terrible drought, and we have no crops even for ourselves.”

“How odd,” the thief said. “I have just come from a country so rich in crops, everyone is drowning in food.”

The king did not believe the thief, but the thief insisted.

“Let us bet,” the thief said, and the king decided to wager 300 gold coins because he was certain the drought had destroyed crops far and wide.

The king sent a servant to travel to the land to see if what the thief said was true.

As the servant rode through the forest, the liar stepped out from behind a tree and said, “Where are you going?”

When the servant answered, the liar said, “I have just come from that country.”

“Well,” said the servant, “how are the crops growing there?”

“Ah, every crop is growing so tall and so strong,” the liar answered, “it takes two dozen men to harvest each plant.”

To save himself from the long journey, the servant asked the liar to come to the palace to tell his king the news, and the liar agreed.

When the liar explained everything to the king, the king was astonished. But he was an honest man, so he paid the thief 300 gold coins.

The thief and the liar departed and traveled on to the next kingdom, where they pulled the same trick. This time the liar told tales of cauliflower so large, one head needed 12 wagons to carry it to market.

In the next kingdom, the thief told a tale of a kingdom with a church steeple so high a bird alighted on it and was able to peck at the stars.

“Some stars fell from the sky,” the thief said.

The king bet the greedy thief 10,000 gold coins that this was not true. Naturally, he sent his servant to find out. The servant came upon the liar, who told him he was indeed from the country with the tall church steeple. The servant asked if the story of the bird and the stars was true.

“Absolutely” the liar said. “Not only that, but I saw 12 men shoving with all their might to roll a monster egg into a cellar.”

The servant came and told this story to the king, and the king paid the thief 10,000 gold coins.

The thief and the liar split their earnings into two equal parts and parted ways. Eventually they both married and built homes of their own. But one day, as the liar was counting his coins, he discovered he had been cheated. He wanted to get his fair share, and went to see the thief.

The thief greeted him warmly. When the liar accused him of cheating, the thief said, “If you come next week, I shall pay you what I owe you.”

And just before the liar appeared at the thief’s door, the thief said to his wife, “I’m going to lie down. When the liar arrives, tell him I have died and you buried me.”

The thief’s wife rubbed her eyes with an onion and when the liar knocked on the door, she answered it weeping so hard she could barely speak.

“Alas, my husband died,” she said, “and we buried him in the hayloft.”

The liar knew the thief’s tricks and suspected this was not so. “Well, then, I shall take some hay for my debt,” and he went to the barn and began to toss the hay with a pitchfork, prodding it this way and that.

Afraid for his life, the thief cried, “I’ll pay next week!”

When the next week came, the thief went down into the crypt inside the chapel and stretched out as if he were dead. Once again, he’d told his wife to tell the liar he had died.

But the liar had expected this, so he walked to the chapel. Just after he walked inside, he heard some robbers outside the window plotting to hide their treasure inside the chapel while they set out on more adventures.

The liar stood very still as if he were one of the statues and watched as the robbers divided up their treasure.

There were 12 robbers, but the chief divided their gold into 13 heaps.

“There’s no time to count again,” the chief said, “so whoever strikes off the head of one of the statues with one stroke will have the 13th bundle.”

And with that he lifted an ax and approached the niche where the liar stood. Just as he waved his ax overhead, a voice from the coffin called out, “Clear out of here or the dead will arise from their coffins!”

And the thief leapt out of the coffin. The robbers were so terrified that they ran away, but they left all their gold behind.

“Will this satisfy my debt?” the thief asked the liar.

“It will indeed,” the liar said. “It’s good to be partners again.”

And so they divided the gold, but this time the liar did the dividing.