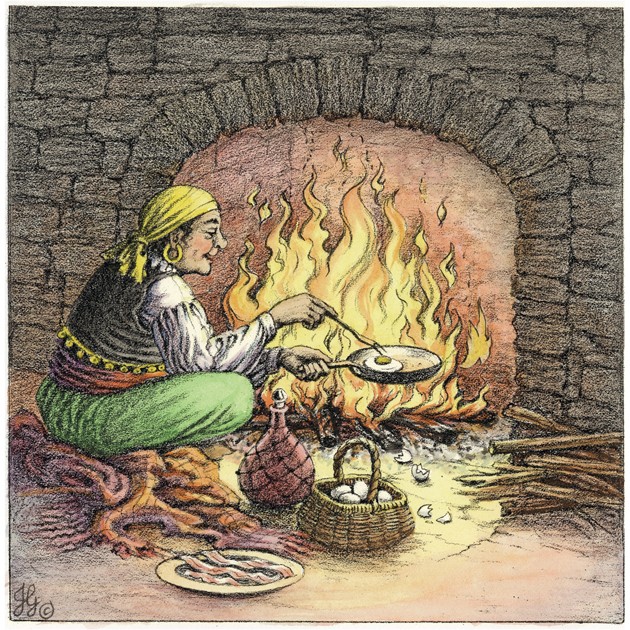 Long ago, a haunted castle stood deserted atop a hill in Spain. Every night, the people in the nearby village heard a voice from the castle moaning and groaning. On All Hallows’ Eve, a ghostly light appeared in the chimney, died and flared again — all night long.

The owner of the castle offered one thousand reales to anyone who would get rid of the ghost from the castle. Brave adventurers from everywhere came to try, but each time, when the villagers came to see what had happened in the morning, they found the adventurer dead before the stone cold hearth.

One bright October day, a jolly tinker named Esteban rode into the village and overheard the people telling tales of the haunted castle.

Esteban feared nothing and said, cheerfully, “It sounds to me as if the spirit is only lonely,” and when he learned of the reward, he rode off to talk to the owner. “I’ll rid the castle of the ghost,” he said, “but I’ll need plenty to eat and drink and a fire to keep me warm, of course.”

“Of course,” said the owner.

Soon Esteban’s sack was full of food, and he had a bundle of firewood, a frying pan and a flask of wine.

Esteban went up the hill toward the castle. As night fell, a chilly wind and threatening rain whistled through the barren trees, but Esteban rode on.

At the castle he entered the pitch-dark hall. Outside he heard the wind shrieking, but he simply unpacked his bag and built a fire in the fireplace. He leaned in to warm his hands, unpacked some bacon and sliced it carefully, putting it in the pan. He placed the pan on the fire, and he smiled at the aroma that rose up and swirled around him.

“Nothing more delicious,” he sighed. Just then a sad voice drifted down from the chimney. “Oh, me!” the voice wailed. “Oh, poor me!”

Esteban called up the chimney in a cheerful voice, “You sound unhappy, but I am accustomed to the braying of a donkey, so your voice does not unsettle me.”

Esteban lifted out his bacon, piece by piece, and lay it down to cool. He broke an egg into the sizzling fat, and the voice cried again, “Look out below! I’m falling!” and a moment later he heard a loud thump and there on the hearth lay a man’s leg clothed in fine trousers.

Esteban flipped the egg, and when it had cooked, he lifted it out and ate it with a slice of bacon. He took a sip of wine and heard, “Look out below!” Once again there was a thump, and a second leg dropped to the hearth.

Esteban broke another egg into the frying pan, and now the voice roared, “Look out below! I’m falling!”

“Fall away,” Esteban said an as he flipped his second egg, and with another thump came the trunk of a man dressed in a blue shirt and corduroy jacket.

Esteban took another swig of wine and broke a third egg into the pan. Again the voice came, “Look out below! I’m falling!” After this thump, an arm lay on the hearth. A moment later, another thump and a second arm landed beside the first.

“I wonder what the head looks like,” Esteban said aloud, and the voice thundered, “Look out below, I’m falling!” Sure enough, a head landed with a thump on the hearth.

The head had dark eyes that looked sad, and as Esteban stared into those eyes, the parts of the body began to move and join, and soon a man — or was it a ghost? — stood before Esteban.

“Good evening,” said Esteban, “would you like some bacon and eggs?”

“No, thank you,” replied the ghost, “but you amaze me. All the others were too afraid and died of fright before I was able to put my body all the way together again.”

Esteban shrugged and continued to eat, but the ghost cried, “I need you to help me save my soul so I can reach heaven.”

The ghost explained his plight: “Three bags were buried in the courtyard beneath a cypress tree. One bag was full of copper, one of silver, one of gold. I stole these from thieves and brought them here to hide them.

“But the thieves came and murdered me and left me like this. If you dig up the coins and give the copper to the church and the silver to the poor, then you can keep the gold, and I will be free to go to heaven.”

“Very well,” Esteban said, and he walked into the courtyard with the ghost. “There,” the ghost instructed him. “Dig there.”

“Why don’t you dig yourself?” Esteban said boldly, and the ghost began to dig until he had unearthed the bags of coins. He turned to Esteban. “Promise to do as I ask?”

“Very well,” said the ghost, and he removed his clothes and vanished as if he had never been. His clothes remained lying on the grass.

Esteban walked inside and fell asleep before the blazing fire. In the morning the villagers were amazed to find him sitting there, alive, cooking his eggs over the fire.

He smiled at the people. “The ghost is gone for good. You’ll find his clothes out in the courtyard,” and off he went to the owner of the castle to collect his reward. Afterwards he went to the church and handed the priest the bag of copper coins. In the village market he distributed the silver to the poor.

Then he traveled home with his reward and his gold. Whenever anyone asked him for his philosophy he said, “It’s always best not to be afraid.”