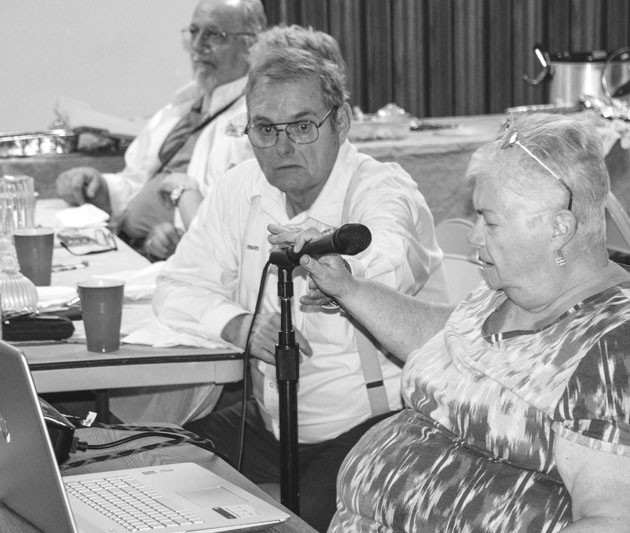 Jerry Henson passes the microphone to his wife Marilyn as they tag-team their presentation about the “Trail of Hope” durng the May 3 gathering of the Settlement Canyon Chapter of the Sons of Utah Pioneers and their spouses and friends.

Leaving everything in the hand of the Lord, the Latter day-Saints (more commonly known as Mormons) were driven from their homes, city and temple to the west, having the choice of crossing the then frozen Mississippi River in February or stay and be burned out by their not so happy neighbors.

The Hensons had some small miracles happen to them to make it possible to fulfill the prophet’s mandate to walk the same “Trail of Hope,” from the newly dedicated Nauvoo Temple to the Mississippi River. Read the stories on cards along the way that tell what happened to the real pioneers who did so under the most dreadful conditions over 180 years before.

The Hensons wove their sometimes tearful, but most of the time hopeful experiences and miracles that helped them come to a better understanding of what their God had asked His people to do. They recommended that everyone take the opportunity to do the same as they had.

On the day she was forced from her home, Bathsheba W. Smith said, “My last act in that precious spot was to tidy the rooms, sweep up the floor, and set the broom in its accustomed place behind the door. Then with emotions in my heart …  I gently closed the door and faced an unknown future, faced it with faith in God.”

Many of the saints had a full-covered wagon; some just a sheet for their wagon covering, and others only had a tent and some little food for the journey. B. H. Roberts tells of the attempts to keep everyone’s hopes alive: “With this advanced camp of the great exodus, there had come a brass band, led by Captain Pitt. After encampment was made and the toils of the day we over, the snow would be scraped, a huge fire or several of them kindled within the wagoned enclosure and there to the inspiring music of Pitt’s Band, song and dance often beguiled the exiles into forgetfulness of their trials and discomforts.”

Although the temple only operated for six months, Jerry Henson felt that it was the ordinances performed in that six months in the Nauvoo Temple that enabled the pioneers to face what they needed to. A quote by Newel Knight probably captures the hearts of those braving the sub-zero temperatures to cross into Iowa.

“Here we all halted and took a farewell view of our delightful city … We also beheld the magnificent Temple rearing its lofty tower toward the heavens. … My heart did swell within me.”

For their obedience to the modern prophet to walk the Trail of Hope, the Hensons were also rewarded with several experiences that had to do with their own family history. In an almost never used Family History Center in Bloomington, Indiana, the Hensons were able find an ancestor of Jerry’s who they had sought information for about 18 years. They were also taken to the very cemetery and headstone the next day. This is just one example of small modern day miracles that feel so magnificent and also cause hearts to swell within us today.

Lastly as guidance to all that were in attendance is this quote from President Tomas S. Monson. “Let us not only remember the past and its required sacrifice; let us also remember that we are responsible to build a legacy for the generations which follow us.”

The Settlement Canyon Chapter of the Sons of Utah Pioneers meets the first Thursday of each month to share a pot-luck meal and to hear heartfelt presentations.  On Thursday at 6:30 p.m,, join us at the LDS building on the corner of 200 S. 200 West. Our presenter for that evening will be Rhett James, a former Institute of Religion Instructor. His topic will be Chief Washakie and his experiences with Brigham Young.