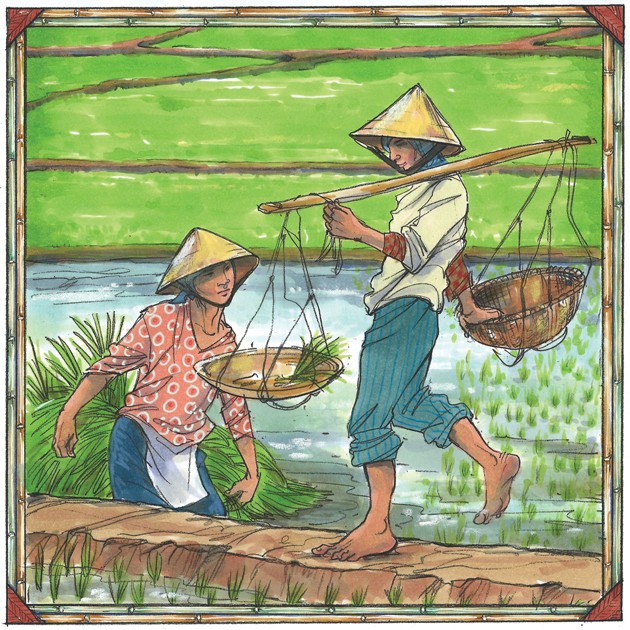 Long ago, there lived a widow with her two sons, Bae and Young-Soo. The family lived in a valley known for its lush rice paddies. For many years, the brothers had helped their father work the fields, and when he died, they took over the farm. The brothers looked after their mother together.

As the years passed, the farm prospered, and the widow was well cared for. She admired her sons, but she taught them that the most important thing was that they always look after each other.

They learned their lesson. Because they cared for each other so well, there was never a problem. When people saw the way the brothers worked together and the way they shared, they agreed that Bae and Young-Soo were models for all the children.

“This is the way family ought to love each other,” everyone said.

The brothers took care of their mother well into her old age. When she died, the two young men divided all her worldly goods between them, careful to make sure the division was thoroughly equal.

After her death, they continued to work in the fields. They tilled and harvested, and in the autumn after their mother’s death, they had two events to celebrate: First, Young-Soo married his beloved, and then the brothers celebrated their biggest harvest ever.

One late evening just before Chuseok, the celebration of the harvest, Bae and Young-Soo were hard at work sacking and dividing their bags of rice under a full moon. Young-Soo smiled at his brother and whispered, “Next winter my wife and I shall have a baby!”

Bae was overjoyed. “That’s wonderful, brother!” he cried. “And I shall be an uncle!”

They went on working. As they worked, Bae thought about his brother’s new life. The wedding had cost a great deal, but with a child Young-Soo’s expenses would rise even more. Bae had plenty, so he began to think about how he could help his brother.

When he reached home, Bae decided what to do. He would sneak one of his bags of rice into his brother’s storehouse. He would wait until midnight to take it there. If he simply offered it, Young-Soo was sure to refuse.

And so at midnight, Bae sneaked over to his brother’s storeroom and left one of his bags of rice there.

Early the next morning, Bae walked into his storehouse to get his tools and was startled to see seven bags of rice sitting there. He counted again. Yes, there were seven. But he was sure he had taken one of his bags to Young-Soo’s place.

“Perhaps I dreamed I carried the bag to my brother?” Bae wondered. He knew that sometimes on the night of the full moon, dreams are especially vivid.

That night, Bae decided to sneak another bag of rice to his brother. He waited until midnight, and then he went over to Young-Soo’s place and left the extra bag. This time he made sure to count: six in his own storeroom, eight in Young-Soo’s.

But the next day when Bae walked into his storeroom, he was shocked to discover he still had seven sacks of rice. How could this be? He shook his head. He thought his dreams must be remarkable. He was so certain he had carried one of his bags of rice to his brother’s storeroom. But he decided he would try again.

And so, once more, Bae waited until midnight. The moon was still bright as he walked. Its glow lit the path between his storehouse and his brother’s, and as Bae walked, he whispered to himself, making certain he was awake.

“I see the moon,” he said, looking up at the sky. “I see myself walking,” he said. “I am counting my steps,” he said. And then, as he neared Young-Soo’s storehouse, he looked up, but what he saw shocked him.

There was a man walking toward him, a man carrying a sack on his back, and as he came close, he saw that the man was his brother. Bae gasped.

When Young-Soo saw his brother with a sack on his back, he also gasped.

“I was trying to give you an extra sack of rice,” Bae said, “to help you to care for your wife and your child-to-be.”

“And I counted my sacks and saw I had one extra,” Young-Soo said, “and I wished only to make our shares equal.”

The brothers burst out laughing when they understood what had happened. Young-Soo said, “Brother, we work the same number of hours in the field. We sweat and we toil in equal measure. You are due the same as me.”

“But, brother,” Bae said, “your need is greater than mine. I have no wife or child.”

“One day you will,” Young-Soo said. “Brother, do me the honor of making sure we continue to share all our lives.”

The brothers embraced, and when the story of the traveling sacks of rice spread through the valley, everyone agreed: “The brothers are models for us all.”