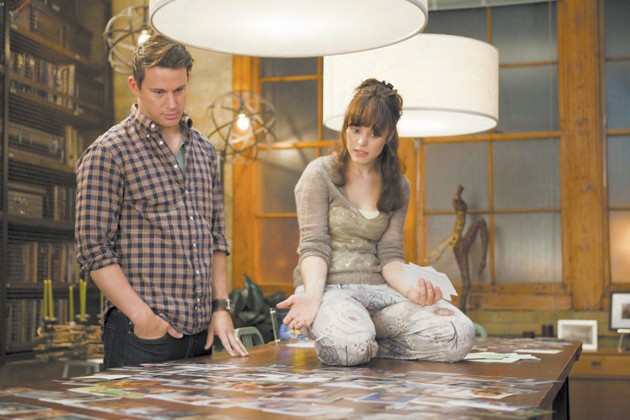 Paige, played by Rachel McAdams, tries to piece together her past using old photos while her husband Leo, played by Channing Tatum, watches her in “The Vow.” Tatum and McAdams have decent chemistry in the romantic drama, which hits theaters tomorrow. image courtesy of Spyglass Entertainment

February 9, 2012
‘The Vow’ brings on the romance, but will leave most audiences cold

Not many men were in attendance at a screening of “The Vow” last night. That’s probably an early indicator the film will have a difficult time finding a male audience, although I can see many men coerced into seeing it by their significant other.

In this story, Leo (Tatum) and Paige (McAdams) are a young married couple living in urban Chicago. Leo owns a small recording studio and McAdams is making a name for herself locally as an artist. Driving home one night after an evening out on the town, the couple stop at a stop sign and begin kissing. A large truck then rear-ends them from behind, blasting Paige through the windshield and causing other, less-serious injuries for Leo. (At the risk of sounding insensitive, it is important to point out that neither person was buckled up when the accident happened.)

When he wakes up at the hospital, Leo anxiously awaits Paige’s return to consciousness, only to find when she wakes up that she doesn’t remember him, and her last memories were from a time several years ago when she was in love with someone else. Leo realizes he must make her fall in love with him again — a task that is easier said than done with her meddling parents (Jessica Lange and Sam Neil) and her former fiancé trying to win her back.

Channing Tatum and Rachel McAdams have undeniable chemistry — at least, when they are in love. Those moments of the film are sweet enough to make Buddy the Elf combust. Unfortunately, most of the film sees the amnesial Paige acting very close-minded about the life she had before the accident — especially the part about her happy marriage to Leo. She spends the bulk of the film defaulting back to where she is comfortable, which is with her parents at home where she was during her last memory. While that aspect of the story is understandable to an extent, her unwillingness to view her husband as her obvious soul mate becomes increasingly frustrating as the film progresses. After all, for many women, if they woke up in the hospital with Channing Tatum telling them that he is their husband, they wouldn’t push the issue.

Leo’s love for Paige is the most touching aspect of the film, and one that will satisfy viewers more than anything else, including the ending — after all the heartache and pain poor Leo goes through, the resolution seemed almost casual, and that cheats the audience. We were just drug through a complicated mess of emotional turmoil that isn’t half as uplifting as the film’s trailer suggested. The least the film makers could have done was provide a redeeming ending.

There is undeniably an audience for “The Vow.” It contains a lot of kissing and Tatum is often shirtless (and — parents beware — has a scene of brief nudity) which is what most audiences anticipate going in. However, Paige’s general refusal to see the obvious makes a truly romantic premise become too emotionally taxing, and ends with muted fulfillment for both Leo and the audience.

Starring Daniel Radcliffe in his first major release since graduating Hogwarts, so to speak, the film joins Arthur Kipps, a nineteenth-century lawyer, as he takes an unenviable assignment to prove he is still valuable to the law firm he works for, traveling alone to a remote coastal town where he must sift through paperwork at the home of a recently-deceased woman. Upon arriving, he finds that the townsfolk —for reasons of their own — want him gone, but he goes about his work in the empty house regardless, discovering quickly that the house is indeed haunted.

Unfortunately, we don’t get to see any acting versatility from Radliffe, as his role doesn’t call for it. Nearly half the movie seemed to consist of Harry — I mean Arthur Kipp — lurking around the house, following strange noises and curious sightings, nearly making audience members cry, “Don’t go in there!”

However, “The Woman in Black” is a decently written and decently acted period piece that should easily satisfy fans of the conventional horror genre. It’s a fair addition to the classic story of the haunted house, never letting itself topple into the realm of the ridiculous like many modern fright flicks. With no big-name stars attached, other than Radcliffe, and a brief but notable performance by recent Oscar-nominee Janet McTeer (Best Supporting Actress for “Albert Nobbs”), this British horror flick is clean, uncomplicated and effective.

One for the Money

This movie, which is in essence a vehicle for “Grey’s Anatomy” star Katherine Heigl, is an adaptation of a novel of the same name. It follows a broke Jersey woman, Stephanie Plum, as she secures a job as a bail enforcement agent at a bail bonds business owned by her cousin Vinnie. With no training, permits or even a gun, she gets herself in deep in the local crime scene as she hunts down a wanted cop, Joe Morelli, who just so happens to be a guy who broke her heart in high school.

Katherine Heigl is awful in this picture, but even without her distracting fake tan and stereotypical “insecure hottie” persona, the film takes no time in setting up its characters, resorting to overcharacterization at its worst with a forgettable array of supporting players who I believe were meant to be charming. Not only that, but it teeters on the offensive side when it portrays certain matters of assault, rape and murder without even a hint of sensitivity. Unnecessary narration and supporting characters — particularly Ranger portrayed by Daniel Sunjata as an elite bounty hunter who is strangely available whenever Stephanie is in trouble — serve only as plot manipulation at its most obvious.

The premise itself is far from believable, as are the many plot turns that left fellow audience members saying out loud to themselves, “really?” An awful movie released during a month that is notorious for studio refuse, “One for the Money” leaves us hoping that Heigl, who also executive produced the film, doesn’t kid herself into adapting the novel’s sequel, “Two for the Dough.”