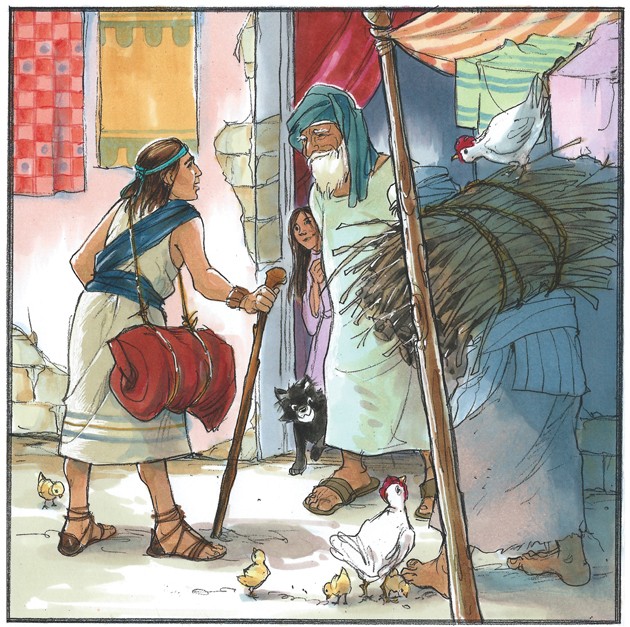 Once upon a time, a merchant from Jerusalem traveled to a faraway city to do business. He stayed in the home of a man named Hassan, and while he was there, he fell ill. The merchant realized he was going to die.

He called Hassan to his room and said, “I am giving you all my possessions. My son will come to find out what has happened to me. Please give everything to him. You will know him by his cleverness.”

Hassan agreed to do this.

The people in the city had agreed among themselves that if a stranger arrived and asked for Hassan, no one would say where he lived. The young man asked every person he saw, but people only shook their heads.

“We do not know a man named Hassan who takes in lodgers,” they told him.

After he had asked a dozen people, he sensed that he was being tricked, and he had an idea. He found a woodcutter and told him he would like to buy some wood.

The woodcutter gave him a price, and the young man paid the fee.

“Certainly,” said the woodcutter, and as he carried the wood to Hassan’s house, the young man secretly followed.

When the woodcutter reached his destination, he called out to Hassan, “Come get your wood.”

“Maybe not,” the woodcutter said, “but a young man did, and he paid for it and asked me to deliver it to you.”

Hassan was grateful for the wood, and now he understood this must be the man’s son. This was clever indeed. So he waited, and a few moments later the young man appeared at the door, and Hassan invited him inside.

“My father lodged in your house and never returned home,” the young man said.

“Is that so?” Hassan said. “Please, join my family in an afternoon meal.”

The young man agreed, and when they sat down at the table, the servants presented five roasted pigeons. Hassan said to the young man, “Be good enough to serve, won’t you? I insist.”

And so the young man served one pigeon to Hassan and his wife. The second he gave to Hassan’s two sons, and the third he gave to the two daughters. He kept two pigeons for himself.

Hassan was surprised, but he said nothing, and he invited the young man to stay for supper that evening.

“We will talk of your father after the evening meal,” he told him.

That night the servants served chicken, and again Hassan asked his guest to serve. The young man gave the head to Hassan, the gizzard, heart and liver to the hostess, the legs to the sons, the wings to the daughters, and he kept the chicken’s body.

“Is this the way you serve in Jerusalem?” Hassan asked.

“As for the chicken — because you are the head of the house, I gave you the head. I gave the innards to your wife because your children came from within her. Your sons are the pillars of your household, so I gave them the legs, and because your daughters will fly away from you when they marry, I gave them the wings. I kept the body for myself because, you see, it has the shape of a boat, and tomorrow I must sail back home.”

The host was impressed, and now he was satisfied. The young man had done just what his father predicted: He had done three clever things.

“You have proven you are truly your father’s son,” Hassan said, “and though I am sad to say your father died, I am happy to give you his fortune. Know your father is very proud of his clever son.”

Although the young man was sad to hear of his father’s passing, he was glad to be able to return his fortune to their family and to the place he had always called home.