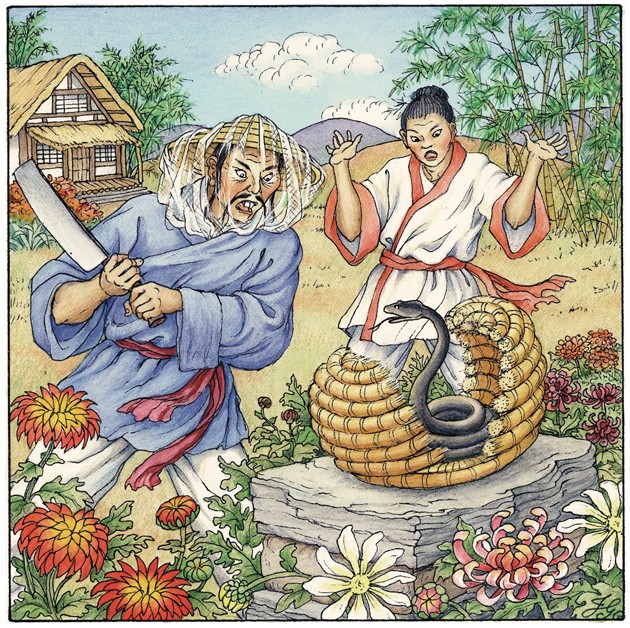 Once upon a time there lived a man named Tou Hsun, and he passionately loved flowers. He spent hours in his garden each day tending to them. One day, after long hours in the garden, he lay down for a nap. As he was sleeping, a man came to him and said, “You follow me. My master wants to meet you.”

Tou followed the man to a town where exquisite white houses surrounded by lemon groves stood in a row. The village was beautiful, and everyone Tou passed waved hello as if he were a long-lost friend. The man led Tou to a palace where a mandarin greeted them.

“The king welcomes you to Cassia Court,” he said, and he led Tou inside to meet the tall, handsome king.

“Welcome to Cassia Court,” said the king. “I am honored that you have come.”

Tou was amazed at this warm greeting, and when the king offered him a goblet of his finest drink, he felt happier than he had ever felt and more at home.

“We need a couplet to memorialize this fine occasion!” the king announced.

Without even thinking Tou said, “Refinement loves the lily.”

“Perfect!” said the king. “You must now meet my daughter, Lily,” and immediately the room filled with the most beautiful scent of lilies.

A few moments later, the most beautiful girl Tou had ever seen appeared, a girl as delicate and stately and sweet as any lily. He was just about to say hello when he woke.

Tou was disoriented, but he discovered he had slept through the entire night. He felt an ache in his heart and a longing to see Princess Lily. He shook his head at his own foolishness. “It was a dream,” he said aloud, though he still smelled the scent of lilies. He went to see if his lilies had suddenly bloomed, but naturally they had not, for this was autumn and only the chrysanthemums scented the air. For the next several days, Tou walked around in a daze, thinking of his dream.

One night he fell asleep again in his garden and the strange man appeared and invited him to return to the court. Naturally Tou followed, and once again the king greeted him. This time he said, “Tou Hsun, I would like you to marry my daughter, Princess Lily.”

Tou was overjoyed, and that very night the wedding was held. This time when Tou woke, he was in his marriage chamber with Princess Lily. He ran to his wife who stood by the window. He held her close. He wept into her hair.

“I thought I was only dreaming,” he said. “Don’t ever leave me!”

At that very moment a strange man appeared at their door and called them to the throne room. There the king announced a terrible thing. “Disaster has struck the court,” he said. “There’s a monster a thousand feet long with a head as big as a mountain and eyes as vast as the ocean coiled outside the entrance to the palace. It has already devoured thousands, and it threatens to destroy everything and everyone!”

The princess began to weep. Tou held her close, and suddenly he had an idea. “We will leave this place. You can come to my humble home,” he said. “It is no palace, but we’ll be safe.”

“Let us depart then,” said the princess. “We have no time to lose.”

And with a whoosh of light and wind, Tou was in his garden. The princess hugged him and said, “Let us make this place just as our palace was, and we shall live as we once did.” But before Tou could answer, he woke.

There he lay in his garden in the cold morning dew. There was no one near.

He stood up and looked around, and suddenly he heard a loud buzzing sound. He looked down at his clothes and saw a swarm of bees hovering there. He brushed at them, but they would not move away.

Confused, Tou walked next door and told his dream to his friend and neighbor. “And now there are bees in my yard that will not leave,” he said.

His neighbor laughed. “Perhaps you should get them a hive.”

His neighbor meant this as a joke, but Tou hurried home and that very day constructed a hive. When it was finished, the bees flew inside. After awhile, another swarm arrived and it too flew into Tou’s hive. Tou was surprised, for usually only one swarm at a time inhabits a hive. When several more swarms had arrived and disappeared into the hive, Tou was so concerned that he again told his neighbor what had happened. His friend suggested they tell the story to the beekeeper who lived not far away. He was a very wise old man, and he came to Tou’s house to inspect the hive.

He put his had against the hive and listened. “I hear nothing,” he said, and he broke the hive open. Inside he found a 10-foot long snake coiled, but all the bees were gone.

“It is the monster!” Tou cried. “This is the monster that destroyed Cassia Court.” With one quick strike, the old man cut the snake in two.

“You have freed Cassia Court from the monster!” Tou cried delightfully. “Now Princess Lily can live in peace.”

The old man gave Tou a hive full of bees. And for the rest of his life, Tou’s garden was home to many beehives that gave the richest, sweetest honey anyone had ever tasted. From that day on, Tou never doubted the truth and the wisdom of dreams.