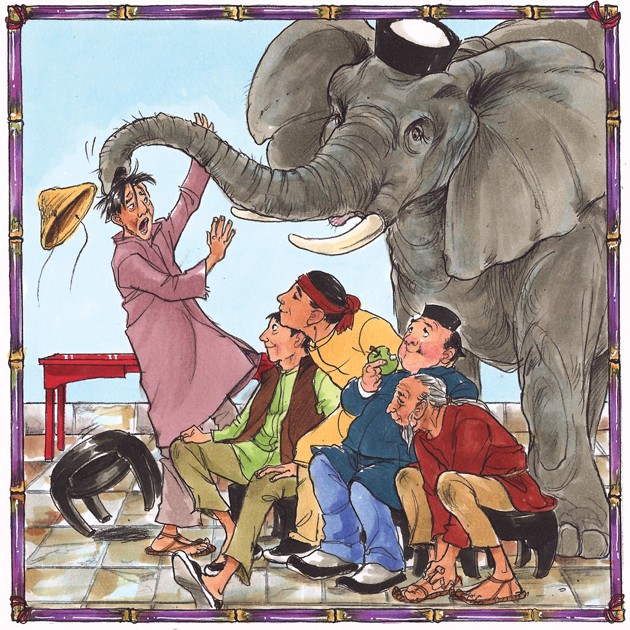 Once upon a time, long, long ago, in southern China, there lived a judge who was known far and wide for his extraordinary decisions. Most amazing of all, the judge employed an elephant to help him decide his cases, and everyone knew the elephant never made an error.

In those days, elephants worked hard for many people, and people understood they were wise creatures. But what the judge discovered, or so people said, was that not only was the elephant strong and diligent, he understood the hearts of human beings.

And so whenever the judge was torn — when he did not know who to listen to or who to believe — he called upon his elephant.

One day, a family came to court to plead their case.

Months earlier, thieves had broken into the family’s house during the night and stolen everything they had. The thieves took gold and jewels and furniture and every imaginable treasure.

When the police could not solve the case, the neighbors began to worry, and then one night, a second home was robbed. Again, every imaginable valuable was taken.

When the police did not find the thief, panic took over. People in the city began to worry that their house would be next. They complained to the police chief, who sent his men out night and day to try to solve the case.

When the day came for the five men charged with robbery to appear in court, it seemed as if the whole city gathered. Everyone wished to see justice done.

The judge called the courtroom to order, and he asked the first couple who had been robbed to come before him.

“Do you recognize the robber among these men?” the judge asked.

The woman nodded vigorously. She pointed to a tall, slender man with graying hair and a pale face and said, “It’s him. I’m sure it’s him.”

“And that one too!” the man said, pointing at a short, pudgy man with a mustache.

The pudgy man nodded and said, “I haven’t either. I’m innocent!”

The judge looked again at the woman. “Are you sure this is the man who robbed you?” he asked.

“Absolutely,” the woman said. “When I turned on the light and saw him fleeing, I caught sight of his graying hair. It’s definitely him.”

The judge turned to the woman’s husband and said, “And you, sir, how can you be sure?”

“I’d recognize that man anywhere,” the man said. “He took a ring right off my finger, and I looked into his eyes! That mustache is a certain giveaway.”

“But I’ve never stolen anything!” the pudgy, mustachioed man cried.

“Neither have I!” the gray-haired man shrieked in agreement.

The judge studied the two men’s faces. “Where were you on the night of the robberies?” he asked.

“And you?” the judge asked the pudgy man.

“I was out of the country until last month,” he said. “I could not have robbed anyone.”

“Do you have any money?” the judge asked the gray-haired man.

“I’m very poor,” he said, “but I would never take something that did not belong to me.”

“Nor would I!” echoed the pudgy man.

“And where did the police find you?” the judge asked.

“I was walking down the street,” the gray-haired man said.

“The very street where the houses were robbed!” the police chief charged.

The judge asked more questions, one after another, and to each question the gray-haired man and the pudgy man had answers.

At long last, the judge stroked his beard and closed his eyes. When he opened them, he announced to the court, “I shall call upon the elephant to decide this case.”

And with that, the elephant was called into the courtroom.

The courtroom grew silent. Everyone knew the elephant was remarkably wise and could read the hearts of men, and the five men sat very still and looked at the creature.

The judge watched the five men, and he noticed the gray-haired man and the pudgy man sigh with relief as the elephant entered the room. A third man, a round-faced fellow, began to smile, and so did the man beside him. But as the judge watched, the fifth man who had been very quiet seemed to grow tense. His face flushed. Sweat dripped from his brow. And as the elephant was led from one man to the next, the fifth man began to shiver.

“Touch their foreheads,” the judge said, and the elephant leaned forward and reached his trunk out to touch each man, and as he did, the fifth man suddenly stood up and cried, “I’m guilty! I robbed these homes.”

The elephant lowered his trunk, and the four innocent men sighed with relief.

The judge looked at the couple who had testified. “You see,” he said, “you must be careful who you accuse of a crime.”

And then he nodded to the elephant and said, “I am grateful to have this wise assistant who helps me to take care in my judgments.”

The next day, a young boy came to the courthouse to ask to speak to the judge. This boy had watched the scene in court, and he wished to know how the elephant knew so much about human beings.

The judge smiled at the boy. “As long as the people believe in the elephant’s deep wisdom, the innocent have nothing to fear,” he told the boy. “And those who are guilty will be afraid.”

And the boy understood that the elephant was a fine creature, but it was the judge who was truly wise.