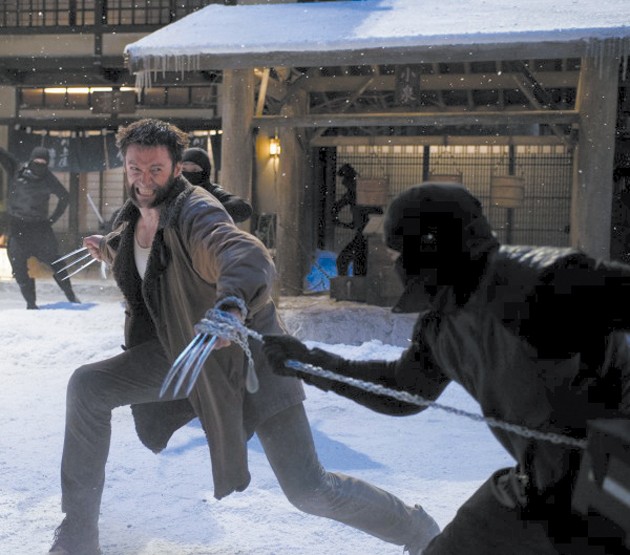 Logan (Hugh Jackman) battles with ninjas and his inner demons in Japan in the definitely-not-another-origin-story film “The Wolverine.” image courtesy 20th Century Fox

July 25, 2013
‘The Wolverine’ has loads of action against the serenity of Japan

It’s been four years since he last put on the wife-beater and claws, but Hugh Jackman proves he’s still got it in “The Wolverine.”

The story, based on the 1982 limited series “Wolverine,” begins in the last throws of World War II, during which we see Logan save the life of a prison guard at Hiroshima. In present day, following the events from 2006’s “X-Men: The Last Stand,” Logan is plagued by the persistent ghost of Jean Gray (Famke Janssen). His self-imposed Alaskan exile is broken by a electric-red-headed, samurai sword-toting, anime-esque Yukio (Rila Fukashima). She has been sent to find him by that soldier, who is now a wildly successful but very old and sick man who, she says, is repaying old debts.

Logan reluctantly agrees to come with her to Japan, but just for one day. Yashida (Hal Yamanouchi) is indeed on death’s door, but offers Logan a gift: The removal of his immortality to allow him a shot at a normal life — and death. Logan rebuffs his offer, but finds the next morning that he seems to have been given the gift against his will, and that Yashida’s mysterious doctor (Svetlana Khodchenkova) might have something to do with it.

Yashida does die, and at his funeral it becomes apparent that his granddaughter, Mariko (Tao Okamoto), is in grave danger. Despite his new-found susceptibility to bullets and the like, Logan takes Mariko to safety. As they try to solve the puzzle of why so many people apparently want her dead, love threatens to blossom between them, even though he’s older than her grandfather. Just saying.

Because this is set in Japan, and this is an action movie, there are ninjas. A whole lot of ninjas. Seriously, ninjas all over the place. And everyone has bo sticks and samurai swords. As unrealistic and stereotypical as that might be, it does make for some pretty awesome action sequences. You’ve seen people fighting on the top of moving trains, but have they been bullet trains going 300 miles per hour? You’ve seen sword fights, but have they been between Wolverine and a gigantic adamantium-plated samurai?

Jackman reminds us why, out of all the actors in the world, he is the definitive Wolverine as he slashes his angst-ridden way through Japan. (Obligatory observations: after spending months following a rigid diet and exercise plan to achieve his Wolverine physique, Jackman shows it off by not wearing a shirt for probably quarter of the movie. If you count all the times where he’s just wearing a tank top, that’s probably a good two-thirds of it or so. However, during most of those times, fake crustified blood is caked over those painstakingly defined abs.)

Newcomer Okamoto is not written as a deep or layered character, but plays her part well. Actually everyone is pretty good at what they do — except I just really hated any time Khodchenkova came on screen. Her doctor turns out to be a poison-spewing mutant, Viper, and her character was kind of unnecessary and really pretty distracting.

It’s like they looked at the cast and realized they hadn’t put a single person in yet with shiny colored leather and decided they just had to manufacture some mutant baddie to fill that gap in their souls. I think this might count as a spoiler, but at one point she sheds her skin. No explanation of why that was necessary. It was in the middle of a battle, so it probably wasn’t because she just had dry skin, but it didn’t overtly seem to have any restorative properties; it pretty much just made her bald. I was really confused about basically everything she did. Maybe they just needed someone to crow about their diabolical plot.

No one expects anything important out of movies like “The Wolverine,” and in its category it satisfies. It’s got loads of action against the shine and serenity of Japan, plus ninjas. So many ninjas. And I don’t care how full your bladder is from your extra-large Coke by the end. Hang around through the first part of the credits for a teaser for “X-Men: Days of Future Past,” coming next year. That one’s going to rock.