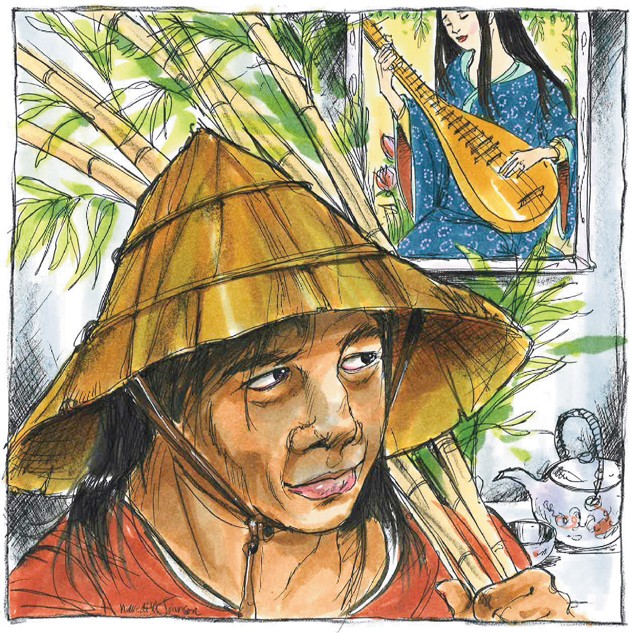 Once upon a time, there was a young man named Hien who was all alone in the world. His parents had died; he had no sisters or brothers, no wife and no children. Every evening he came home from work to his quiet house, and although he was lonely, he seldom thought about all that was missing in his life.

One day when he returned home, he was amazed to find the house tidy, the lamps lit and a delicious meal prepared on the table. Everything about the place felt better than it ever had. He ate the meal and thought about the mystery, but he was so tired that he quickly fell asleep.

In the morning he awoke to find breakfast had been made. He checked the windows and doors, but they were locked. He looked everywhere, but found no one in his house. He could not imagine who was taking such good care of him.

This went on for several days. Although Hien was grateful for the attention, he was mystified. So one morning as he left, instead of heading down the road for work, he hid in the bushes beside his window. He peered inside, waiting to see what would happen. To his astonishment, a beautiful young woman stepped out of a picture on his wall. He had often studied that painting and had become somewhat infatuated with the woman. But now she was outside the frame, and she was dusting his tables.

Hien hurriedly ran inside, grabbed her and said, “Who are you? Where do you come from?”

The woman pointed to the picture frame and smiled. “I felt so sorry for you,” she said. “So I decided to help you.”

The woman shook her head. “Impossible. You’re a human being, and I’m a portrait on a wall. We are from different worlds, and that is where I belong,” she said, pointing at the frame.

“I’ll fix that,” Hien said, and he snatched the picture from the wall, raced into his room and locked it in a trunk. “Now you cannot return to the picture,” he told the woman. “Marry me.”

Her name was Thuy, she told him, and she agreed. So they married and lived happily together. They had three sons, and life was good. But every year Hien grew one year older, and Thuy never changed.

As their sons grew older, they began to ask their father questions.

“Why does Mother never get older?” the oldest son asked.

“You say you are from different worlds, but where is Mother from?” the youngest wanted to know.

Hien refused to answer, but the boys kept asking. “Tell us about our mother. She is so secretive; please tell us her story.”

At last Hien could keep the secret no longer, and he sat the boys down and told them the true story.

The boys laughed. “Impossible,” they said. “You’re quite a storyteller, Father.” No matter how he insisted, they did not believe him.

Hien became so frustrated that he finally turned to the boys and said, “Go to the trunk in my room. Here is the key. Open it, and you will see the empty frame and the place your mother comes from.”

The boys did just as their father told them, but when they saw the empty frame, they still did not believe him.

And so, the next day, the oldest son went to his mother and asked if the story their father had told them was true. “He showed us an empty frame,” the boy said. “But it’s only a story, isn’t it?”

Thuy looked at her son and tears filled her eyes. “Where is the frame?” she asked, and the boy took her to the trunk, opened it and showed her.

Thuy took the frame in her hands and began to tremble. Then, as her son watched in wonder, she placed it on the wall where once it had belonged. Then she called her other sons into the room.

“Boys,” Thuy said, “I love you with all my heart, but I can no longer stay here. I belong to a different world, and I must return. Tell your father I love him and will miss him. I will miss all of you and remember you always.”

With that, as the boys watched in wonder, she stepped into the frame.

The boys began to weep and cry out for their mother. They pulled at the frame, but their mother was frozen there, her smile unmoving, her eyes lifeless.

When their father returned from work, they told him what had happened.

Distraught, Hien broke down in sobs. He placed a cloth over the picture and tried to forget about Thuy. But soon after that, he removed her picture from the wall and took it to a gallery. There it remains to this day, a beautiful woman surrounded by flowers, smiling down at this world she once visited.