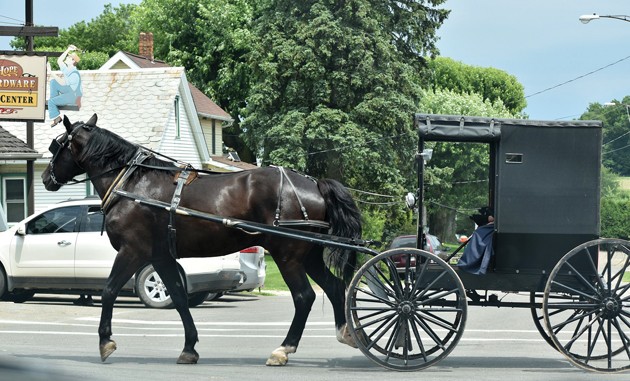 Scenes like this one are common in the Amish country of Ohio.

January 11, 2018
The wonderful lessons we learned from our Amish friends

My husband Jay is a friendly guy. We can’t go anywhere without him starting up a conversation with random people. So it was no surprise, back in the early 2000s, when he came home from a business trip and told me that he had made some new friends on the plane and we were going to spend a weeklong vacation with them in Ohio.

Let me backtrack for a minute. Jay’s and my mutual interest in the Amish goes way back. We both have immense respect for their dedication to preserving their way of life despite many hardships and persecution. That respect led us to make a weekend trip to Holmes County, Ohio several years prior. While there, we visited an Amish-Mennonite museum and went to a Mennonite Church service.

The Miller family, who were designated to invite any visitors to their house for lunch that day, welcomed us into their home after church to eat a delicious homemade meal and spend the rest of the day. We learned on that trip the Amish don’t have church buildings and their services aren’t open to visitors. They rotate church to a different member’s barn every Sunday. The horse-drawn “pew wagon” shows up on Saturday to unload the pews. And church lasts all day, complete with a picnic lunch and games. Of course, everyone travels to and from church by horse and buggy.

When Jay met his new friends Bob and Sandy on the plane, he learned that they had bought a windmill from some Amish friends in Charm, Ohio. We were invited to come with them on a vacation to visit David and Fanny Troyer and their large extended family of 11 kids and 65 grandkids — all who live within a few miles of each other.

Before I knew it, we had flown to Michigan, and were driving from Michigan to Ohio with total strangers who, by week’s end, would become friends. The four of us stayed for the week in an Amish bed and breakfast, which of course, had no electricity, but had a battery operated pole lamp on wheels that we could drag around from room to room. We spent the week visiting with the Troyers and many other Amish families, spending hours and hours talking.

Talking is the entertainment of choice for most of the Amish we met. They are curious about what is happening in the world and want their “English” (non-Amish) friends to fill them in about world events or what their lives are like. We were there shortly after the 9/11 attacks and they were trying to understand where New York was and why it happened. They are a peaceable people and the idea of attacking others, with the purpose of causing harm, is inconceivable.

There are different sects within the Amish community and some allow their members to do more than others. The Swartzentruber sect believes that life should be difficult. Their homes are primitive and, where other Amish families may have a propane-powered refrigerator in the kitchen, Swartzentruber women have to keep their perishable food outside in a submerged cooler box in cold creek water until use.

Each Amish “church” consists of no more than 50 people, because more than that would be too much for a family barn to hold. Each church has a bishop who is elected by the church leaders and he makes the rules for his congregation. Most of the Amish we met were allowed to ride in cars, but not own or drive one. One family we visited was allowed by their bishop to fly in a commercial aircraft — as long as someone drove them to the airport!

One of the sons in this family was a nationally sought after horse trainer and was allowed to fly to other parts of the country to train horses. Some Amish women could sew dresses with only solid black or navy blue material, while others were allowed to have dark colors with a small print on the fabric. A married Amish man has a beard and always wears a black, wide-brimmed hat. Many Amish men had construction jobs with secular companies and would ride to work with an “English” co-worker.

We also went to the “Amish Kmart,” which was a huge barn where you could buy everything from penny candy to black hats and white prayer bonnets as well as oil lamps, shoes, fabric, guns, and just about anything that a family needs to survive — 100 years ago. You won’t find any electronics or modern conveniences. And you better plan to get your shopping done before sunset because, once it’s dark, there’s no lights and the store is closed.

The other thing we learned about was the “deciding year,” which is when boys and girls turn 18 and they can choose to walk away from their Amish lifestyle and find out what it’s like to live a normal American life. During that year they can get a driver’s license, wear “English” clothes and go to movies. At the end of the year, they decide if they will remain Amish or not. The family will accept their decision either way.

The horse trainer I mentioned earlier, had run the family farm since he was 13, had a profitable chicken business (subcontracting to Tyson chicken) and was about to turn 18. I asked him about the “deciding year” and he just laughed and said, “What’s to decide? What better life could anyone have than the life God has given me? I don’t need to try anything different. This is what I want.” I wonder how many teens I know today would answer the same way.

Not only did we learn about a whole different way of life that week, we also gained an increased respect for the earth itself. The Amish pride themselves in being separate from the rest of the world and don’t really adopt many modern practices. But one thing that will pique their interest in a heartbeat is any new idea about how to amend and enrich soil. The soil is everything. Because they raise, hunt for, or grow all their own food, they are totally dependent on the environment to keep their families alive.

I had two major, gardening/life related take-aways from this amazing experience. The first one is that time waits for no one. In our rushed existence, we can start to depend on things happening quicker, easier and in our timeframe. The Amish understand that when the ground is ready to plow, you plow and when it’s time to plant, you plant. If you wait, then you won’t get the result you want.

For us, if the tomatoes get in late, we can buy some at the store. We may think if we add extra fertilizer or water, we can make up for lost growing time. Not really. It takes a set time to grow crops and if you miss the planting time, it’s too late. I observed that the Amish run their lives; their lives don’t run them. The family’s very existence depends on responsible actions by the parents and participation by the children.

The second take-away is that the ground we stand on is literally the source of our sustenance. Everything on the planet is either grown or mined. If we didn’t grow it, someone else did. The Amish have tremendous respect for nature and God’s order for things. They understand the earth is a gift that must be cared for. They try hard not to waste anything or misuse resources. They take care of their neighbor. Their lives are oh so simple, yet oh so rich.

We didn’t get a Christmas card from the Troyers — the first time we haven’t heard from them this time of year. I can’t call or look them up on Facebook. Perhaps they have passed on. But if I never hear from them again, or get to visit them, I am forever grateful for their example and friendship.